The Mighty Croon Dogs team up with Cass Winery

Why not party for a worthy cause on New Year’s Eve? Rather than just focusing on welcoming 2010—which may or may not be better than that tired old 2009—you can cast your eyes wider, all the way to Kenya and Uganda in eastern Africa.

Living in those countries are thousands of people with no access to regular medical care, making do with less than two dollars a day. A Templeton-based humanitarian charity is dedicated to providing free medical clinics and medicines to needy folks in developing countries, and they’re planning to travel to Kenya and Uganda in 2010 to treat more than 3,000 people.

All they need is money, and that’s where New Year’s Eve revelers can help. Cass Winery in Paso Robles (7350 Linne Road) is hoping to raise $10,000 for the charity, His Healing Hands, on New Year’s Eve, according to winery owner Steve Cass.

“New Year on the Serengeti” features the upbeat tunes of the Mighty Croon Dogs on Thursday, Dec. 31, with a lively, can’t-sit-still mix of musical styles: rock’n’roll, R&B, blues, funk, reggae, Latin, country, soul and more. Pianist and composer Marek Zebrowski kicks off the festivities with a piano concert, dinner includes a selection of exotic East African cuisine, Cass wines will be flowing, you can bid at a live auction, and even the kids will find special activities just for them.

Fly with the Angels

The Otter Rock Café in Morro Bay (885 Embarcadero, 772-1420) specializes in providing fine, fun music every night, helping plenty of local musicians earn enough ducats to buy shoes for their kids. Owner Jaime is a big fan of live music, and makes sure her waterfront nightspot is always ringing with melodies and harmonies from some great local players and singers. With a full bar, good food, and a fabulous view of fishing boats, floating otters, and of course the picturesque Rock, it’s long been a popular destination for locals and visitors alike.

Balbinot says it’s the first time in more than 10 years that the Santa Barbara-based band has been within 200 miles of home on New Year’s, so put on your most comfortable dancing shoes and head to Morro Bay for a free performance by Cadillac Angels on Thursday, Dec. 31. 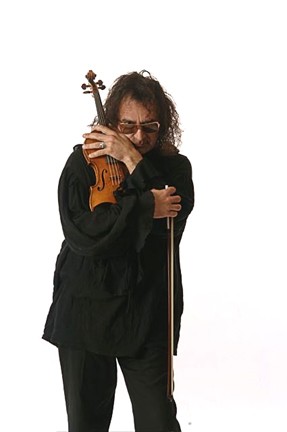 The next performance at the Famous Jazz Artist series at the Hamlet in Cambria features Charlie Shoemake’s new band, The Sounds of Shearing. Vibraphonist Shoemake, joins other former George Shearing Quintet members, Ron Anthony on guitar, and Colin Bailey on drums. They’ll perform the songs of one of the jazz world’s most famous groups. Pianist Terry Trotter, bassist Luther Hughes, and vocalist Sandi Shoemake will also be on hand, on Sunday, Dec. 27. The 4 p.m. show costs $15, the 7:15 show is $12, or see both for $20. Call 927-0567 for reservations.

Ever wanted to party at an Electric Ball on New Year’s Eve? Here’s your chance! The Clubhouse (740 W. Foothill Blvd., SLO) is putting on a special electronic bash featuring electro rockers Tropo on Thursday, Dec. 31. Music starts at 6 p.m., with two stages featuring DJ Shaggy, KauzaFex, Chonie Vargas, Ted Waterhouse, and more. Tropo pumps out trance/house/rock tunes with an electronic dance vibe, featuring Tyson Leonard, Grant Leonard, and Ryan Johnson, all formerly of Glider. Get ready for the energy level to go higher and higher on the dance floor! A free shuttle is available in SLO (call 548-8500 in advance) and tickets cost $10 at the door.

The Grand Ballroom at the Cliffs Resort in Shell Beach turns into a winter wonderland for New Year’s Eve. Dance to the unique tunes of the Damon Castillo Band on Thursday, Dec. 31 from 9:30 p.m. to 1 a.m. These New Times Music Awards first-place winners pump out jazz-inflected pop that just oozes with soul, led by Berklee College of Music grad Damon Castillo. You’ll find party favors and of course a Champagne toast at midnight. Tickets cost $45, or $130 if you want to partake of a delicious New Year’s Eve dinner. Info or reservations: cliffsresort.com or 773-5000.

Up the coast at Ragged Point Inn, dance the night away to upbeat blues from Lenny Blue and the Otter Guys Band on Thursday, Dec. 31 from 9 p.m. to 1 a.m. Your $30 ticket also includes a Champagne toast at midnight, and dinner and ocean view rooms are also available.

In Cambria, the Pewter Plough Playhouse is the place to be, with live caberet music featuring Yoly & David Together Again—that’s Yoly Tolentino and David Manion—plus Agatha Christie’s The Mousetrap on stage, a supper buffet, desserts, and plenty of Champagne, all on Thursday, Dec. 31 starting at 7:30 p.m. The whole package costs $125. Call 927-3871 to reserve yours.

Groove in the New Year with the laid-back reggae and rockin’ blues beats of Shival Experience on Thursday, Dec. 31 at Sweet Springs Saloon in Los Osos, where the cover charge is 10 bucks, including party favors and Champagne at midnight. Find out more online at sweetspringssaloon.com.

You gotta hand it to Harry’s Nightclub and Beach Bar in Pismo Beach, where you can dance to live contemporary rock bands seven nights a week! Way to go, Harry’s, for supporting local musicians. Always a favorite Pismo destination, Harry’s is dishing up a special New Year’s Eve celebration. From Las Vegas comes Stinger, a band known for its good-time-party vibe, on Thursday, Dec. 31 from 9 p.m. to 2 a.m. Admission to this bash is $25 at the door.

Lido Restaurant in Shell Beach is cooking up something special to welcome the New Year. Along with an amazing five-course dinner, you’ll also be treated to live jazz from the Toty Viola Trio, with special guests singer Sunny Wright and drummer extraordinaire Darrell Voss. The band strikes up at 8:30 p.m. on Thursday, Dec. 31. Cocktail attire is encouraged, and tickets cost $95. Call 773-4300 for reservations.

Mongo’s in Grover Beach (395 Grand Ave., 489-3639) is always a good bet for a party. The New Year’s Eve Bash features socially conscious reggae and meditative rock-dub sounds of Natural Incense, starting at 9 p.m. on Thursday, Dec. 31. It’ll cost you $10 at the door, with prizes, giveaways, and plenty of danceable tunes all night long.

A 1960s Rock’n’Roll New Year’s Eve Dinner and Dance Party is being organized by local band Unfinished Business, whose members figure they can put on a party better than anybody else can. They’re promising plenty of oldies music, plus a buffet dinner, prizes, and the ever-popular Champagne toast, on Thursday, Dec. 31 from 8 p.m. to 12:15 a.m. at the South County Regional Center in Arroyo Grande. Tickets cost $75, and include a chance to hear a rendition of the band’s parody song, “On the Cover of the Journal Plus.” You can find out more online at unfinished-business.org, or by calling 929-5211.

Over the grade, the Pour House is where it’s at (1331-A Vendels Circle, Paso Robles, 239-2868, pasopourhouse.com) for excellent music washed down with finely crafted beers. Fish Out of Water pours out their distinctive original funk, rock, reggae, and even some hip-hop for your dancing pleasure on Thursday, Dec. 31 at 9 p.m. No cover!

If it’s the music of the ’70s and ’80s that you prefer, you’re in luck. The Rhythm Method takes the stage at La Bellasera Hotel and Suites in Paso Robles on Thursday, Dec. 31. Your $99 ticket includes a four-course dinner, dancing, welcome Champagne, and of course a midnight toast. Call 238-2834 for reservations.

And be sure to mark your new 2010 calendar for Saturday, Jan. 9 when harmonica and soul great John Nemeth and special guest Kid Andersen play at the SLO Blues Society show at the SLO Vets Hall. The all-volunteer Blues Society has been working hard to put on noteworthy shows, and kudos to all the organizers—you know who you are!

Kathy Johnston is filling in for Glen Starkey while he’s on staycation. Welcome him back to work at gstarkey
@newtimesslo.com.

Bob Dylan—Christmas in the Heart

What would you make of Allen Ginsberg doing renditions of nursery rhymes? Would curiosity itch at you to listen? Maybe this is the question to consider when listening to Bob Dylan’s Christmas in the Heart. Holiday carols belong to our national heritage of song, learned in childhood and remembered better than the national anthem. It makes sense that one of our greatest songwriters would give them a go. With proceeds going to charity, and with musical assistance from Los Lobos’s David Hildago and guitarist Phil Upchurch, the only hard swallow is Dylan’s grizzled voice, which makes this an album of personal taste. After an initial flinching, the album actually starts wonderfully, with a cheery version of “Here Comes Santa Claus” and a grandly sentimental reading of “Do You Hear What I Hear?”. And while his Latin-enunciation of “O’ Come All Ye Faithful” may scratch at your inner chalk boards, the mixture of gypsy jazz and lounge blues on “The Christmas Blues” calls for a repeat.

As rock’s thespian showman, Tom Waits can turn from a ’50s Beat snake-oil salesman to a ramshackle conductor of a junkyard orchestra in a snap; he inhabits his roles so completely that it’s difficult to divorce his actual persona from his crafted fantasy, not that we’d want to. With infrequent touring, Glitter and Doom Live is the only glimpse we have of Waits in his treasured arena since 1988’s Big Time. With a career that has stretched four decades, Glitter and Doom Live pulls from his recent repertoire, highlighting songs from Mule Variation (“Get Behind the Mule”), Real Gone (“Circus” and “Trampled Rose”) and his recent Orphans collection (Leadbelly’s “Fannin Street” and “Lucinda”), though he shuffles in a few classic as well (Black Rider’s “I’ll Shoot the Moon” and “Lucky Day”). If you’ve never understood the adoration fans have for Waits and his degenerated raspy voice, “Falling Down” may be the key. He bellows with complete devastation and conviction. And once you decipher the lyrics, you realized you’ve already believed every word. Waits’ performances leave an indelible imprint on you, and Glitter and Doom Live is a worthy showcase. ∆