Dancing with death: Central Coast organizations and families honor the dead in the ancient tradition of Dia de los Muertos

A skull is always smiling.

While people all over the world recognize the skull as a sign of death (when else do you see one?), not everyone shrinks away from the sight. A celebration known as Dia de los Muertos—the Day of the Dead—actually looks to the human skeleton as a symbol of the people who came before us. 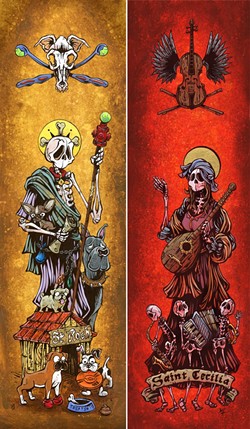 These deathly depictions aren’t clad in long black robes and carrying scythes, but rather don the festive outfits of parties and weddings.

The Day of the Dead’s origins are firmly rooted in Hispanic and Central American traditions, dating back to the ancient indigenous Aztecs. The Catholic Church later adopted the celebration into a Christian context, and it’s since grown from a regionalized cultural happening into a holiday that’s gaining popularity in the United States, where people are embracing the tradition of building altars, preparing food, playing music, and eating sugar skulls.

A variety of local groups are organizing Dia de los Muertos events throughout the Central Coast this year, with many celebrating on Nov. 1 and 2 via a variety of visual and performing arts. The Guadalupe-Nipomo Dunes Center is, instead of a mounting two-day event, playing host to an exhibition of visual works created by San Diego-based artist David Lozeau, whose style is hugely influenced by Dia de los Muertos, as most of the subjects he paints are skeletons.

“So, I moved here 10 years ago from the East Coast, and on the East Coast, when someone dies, you drink whiskey and cry, and then you try to forget,” he said. “But out here, when people die, there is a giant, fun celebration of the person.”

This fundamental cultural difference in views of death haunts not just Dia de los Muertos, but Lozeau and his art as he travels across the country. Many Americans ignorant of the skeleton-showcasing celebration ask the artist why his art is all so “morbid.”

“People usually pay attention to this only once a year, and when I am out there all year, I am acting as a kind of ambassador for the holiday—which is funny because I am a white guy with no Hispanic heritage,” he said. “But I enjoy telling people the origins and being an ambassador to a culture that has really embraced and welcomed me.”

Lozeau’s Day of the Dead-inspired art will show at the Dunes Center through Nov. 16, revealing his cartoonish depictions and more serious and realistic-looking paintings alike. He’s come to see his art pieces as altars that immortalize a time, place, idea, or person. This falls completely in line with the traditions of Dia de los Muertos, which includes altar building at cemeteries, at special events, and in homes.

The altars—known as ofrendas, usually made by family members and friends—immortalize departed loved ones with photographs, bright artwork, tokens, figurines, and even food. All the items serve to help the living remember and honor whomever the altar was built for, explained Gina Rodriguez, president of the Mexican-American Scholarship Cultural and Recreation Association (MASCARA).

“You put the foods that they loved and anything that would remind you of them,” Rodriguez said. “For example, my mom loved tamales, so I put tamales there, and she loved the Lakers, so I put a Lakers hat or some of her Lakers gear on the altar.”

MASCARA is presenting its 20th annual Day of the Dead celebration and exhibition at the Santa Maria Town Center. The event is held through Nov. 2 and includes several different kinds of ofrendas. Some of the altars are put up by families or individuals, but there’s also a community altar, Rodriguez explained, to which everyone can contribute.

This year, MASCARA is honoring people who have died as a result of violence, Rodriguez explained, in order to both raise awareness of the problem and honor those who’ve been recently lost to gun violence, domestic abuse, homicide, and suicide, all of which are issues that have affected local families.

“It’s not macabre,” she emphasized. “There is a lot of love, time, and thought put into each altar. It’s not something the families take lightly; they put a lot of effort into this.”

Others find Dia de los Muertos to be a celebration worth having not because of any particular ancestral heritage, but rather due to the nature of the tradition itself and the way it addresses death.

“For us, it has several layers of meaning,” she said. “One is to make death more a part of life that we can talk about, because it is on the continuum of life.” 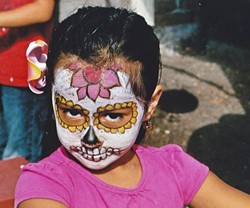 Bereavement managers like Pires work with the dying—and those they left behind to grieve—on a daily basis. Avoiding the topic or the feelings it generates doesn’t help matters, Pires explained, and the Day of the Dead offers a chance for death to move into a more positive realm.

“We love the Mexican and Latin American tradition of Dia de los Muertos because they celebrate their loved ones and invite them back to be a part of the community on this one day of the year,” she said. “You want to keep them with you, but in a way that you allow love for others and for life, and you don’t just mourn them and then let them go.”

Wilshire Hospice’s event will be bright, loud, and festive, including Aztec dancers, live mariachi music, art, poetry, face painting, family activities, and food. This is common of most Dia de los Muertos events, which are spread across one or two days.

Santa Maria is also playing host to a Day of the Dead event at the city’s Veterans’ Memorial Hall. Though the hall is quite large, there’s only enough room to contain some of the altars that will be created for the event, with more spilling out into the plaza, and even more festivities happening in Veterans’ Memorial Park across the street.

“The Santa Maria Recreation and Parks Department went through their leisure assessment a few years ago, and one of the things the public wanted was more cultural programming,” said Santa Maria recreation supervisor Dennis Smitherman. “We have seen it become more popular, and I think it is because we want to celebrate the lives of the loved ones, the ancestors, and people who gave back to us in some shape or form.” 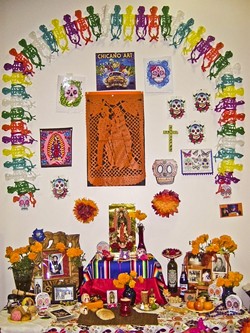 The Santa Maria event will also include a variety of music, Aztec dance, food, and family-friendly activities.

Just across the Santa Maria River, at the Historic Dana Adobe in Nipomo, organizers are planning yet another Dia de los Muertos celebration, this one set to include several altars inside the Dana Adobe and a celebration outside with food, dance, arts activities, and music.

Dia de los Muertos (or its Catholic equivalents of All Saints Day and All Souls Day) may very well have been celebrated at the Dana Adobe during the mid 1800s by Capt. William Dana and his family. The adobe was a religious household—and was no stranger to death, explained Dana Adobe Nipomo Amigos Executive Director Marina Washburn.

“I think it’s really interesting when we look at early California history; death was so much closer to us and our homes,” Washburn said. “People were often buried in our property before we sanitized or removed ourselves from death to the degree it is now.”

To that end, many of the community events planned for this year feature activities for children, including creating altar items, decorating sugar skulls, and face painting. Participating in a Dia de los Muertos event, at which the dead are remembered positively, may help young people grieve in a healthy way and feel a positive connection to a departed grandparent or other family member, Washburn explained. 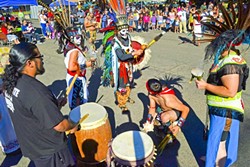 The Day of the Dead appears to help people of all ages process a difficult topic. Building an altar may be a daunting task at first, but when it’s finished, it can bring a sense of connection between the person building the ofrenda and the person to whom it’s dedicated. To continue the remembrance with large, boisterous activities reminds celebrants of good times spent with loved ones who are gone, but also shows that the party will continue even after we all take our respective bows.

“I think we’re happy to see more awareness is out there about some of these cultural elements that are part of our cultural foundation and roots in California,” Washburn said. “These longstanding traditions that have carried through all the way from the indigenous people who lived here, they illustrate not just where we are, but where we are going, and it’s great to see these traditions coming back and becoming more widely accepted.”

Joe Payne is arts editor of the Sun, New Times’ sister paper to the south. Send comments to jpayne@santamariasun.com.