Dancing with the devil: Civic Ballet brings new life and movement to 'The Crucible'

View a slideshow of the Civic Ballet rehearsing 'The Crucible.'

There’s an inherent duplicity in putting on a show, pretending to be someone that you’re not. Drew Silvaggio, artistic director for the Civic Ballet, in San Luis Obispo, doesn’t see it that way.

“Struggle! This is life and death,” Silvaggio says to a group of about 30 rapidly moving dancers at a rehearsal in early April at the company’s studio, Academy of Dance. “You need to tell this story with what you’re doing. It needs to be honest. It needs to be real. I don’t want anything but honesty.” 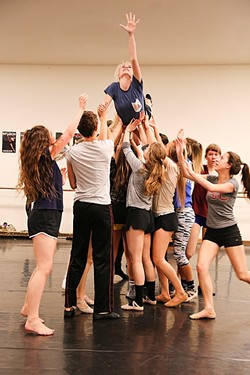 Honesty seems like an odd request for a dance production of Arthur Miller’s The Crucible, a story that’s based on a massive web of lies. But the story of the painstakingly puritanical Salem witch trials also seems like an odd theme for a ballet. Then again, Abigail Williams and company did start the witch-hunt by brazenly dancing in the forest to call upon the powers of Satan.

The Crucible as a dance production isn’t something you’ll see in other ballet companies’ performing rotations, unlike the ubiquitous, classic ballets The Nutcracker and Swan Lake. That’s because it’s a Silvaggio original creation. A few years back the teacher and choreographer was sitting on a beach in Thailand, recharging and thinking what his next big project would be, when the idea to transform the classic play The Crucible into a dance piece popped into his mind.

“Once it was in my head, it was one of those things where I didn’t want to stop thinking about it,” Silvaggio said. “As a choreographer, it’s so much more freeing to know that no one had done it before.”

The play checked off two big criteria for Silvaggio: It had a theme that was continuously relevant, and it employed a large cast of mostly young girls, which the studio has in abundance. A few things got tweaked. Instead of being set in colonial Massachusetts in the late 1600s like the play is, the dance production is set in the 1940s, around the time when Miller refused to give up names of fellow Americans in the communist party (basically the equivalent of being a witch at that time) in the McCarthy era. He landed on the Hollywood blacklist, barred for a time from working in show biz. That experience led to Miller writing The Crucible, which also serves as a commentary on the madness of that time, of the power of accusations and recanting.

The Crucible is a high-energy dance performance, though the tone and music shifts from scene to scene. If you had to put the whole performance into a box, it would be labeled contemporary dance with a dash of I-do-what-I-want style. In the scene where Abigail Williams and the girls are in the forest with Tituba, their servant from Barbados, the dancers move and scurry about as if they’re being pulled by strings against their will by an unseen puppet master. During the scene where the good reverend tries to exorcise the devil out of Betty Parris, just one of the many girls behaving badly, the song “The Devil Went Down to Georgia” has the dancers gather around the girl writhing and jumping on her bed with the dark lord, clapping and dancing square dance style.

Another piece set to the song “Angel of the Morning,” features a simultaneously sad and sweet duet between Elizabeth Proctor and her cheating husband John Proctor, whose betrayal set the entire witch hunt in motion. The jealous and accusatory Abigail Williams watches in anger before cutting in on the potentially reconciliatory moment.

This is now the third year of The Crucible dance production being performed in San Luis Obispo.

“Every year you learn something new about the show,” Silvaggio said. “I usually get kind of crazy and bored with choreography, but to me the choreography is essential to telling the story so it hasn’t changed much.”

At the heart of The Crucible is a horde of young girls defying their elders, telling lies, and scheming to get the (married) men they want.

Those themes are also present in a second dance production, going hand in hand with the The Crucible at the Spanos Theatre on April 15 and 17. La Fille Mal Gardee (The Defiant Daughter) is a classic ballet with roots going back to 1789. It’s a classic case of a well-meaning mother trying to marry her daughter off to a rich, stupid man. Meanwhile, the defiant daughter is sneaking around with her true love, who is but a poor farmer’s son.

“The relationship between all of the main characters is a constant laugh,” Jackie Lee, choreographer for the production, said. “It’s a great easy story to follow. It’s almost like a play.”

Like The Crucible, La Fille Mal Gardee is also a lively production, ranging from classical ballet to a May Day pole dance to folk dancing and even a clog dance.

“I wanted this ballet to flow through and be exciting,” Lee said.

Silvaggio dreams of a San Luis Obispo where people flow through to watch productions with the same excitement the dancers perform them with.

“We have to validate the dancers by giving them a full house,” he said. “They’ve been working on their craft for most of their lives. The more that the community supports local art, the more local art there will be.”

Ryah Cooley’s got moves at rcooley@newtimesslo.com.