He is a really bad dude, according to those who know him. He attacked a county employee with a chain in broad daylight for no apparent reason and laughed as he fled the scene. He brags to his cellmates of his violent exploits and vows to continue his rampage upon his release slated for this summer. 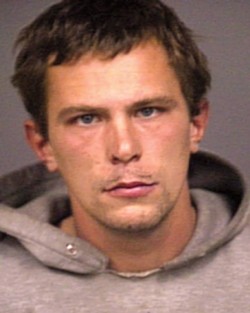 # Even in jail Charles Clark, 26, canâ€™t keep his hands to himself. Jailers have been forced to change his housing designation six times. On April 17, he attacked 50-year-old Donald Woods, one of his cellmates. A SLO County Sheriff deputy took pictures of Woodâ€™s blackened eyes and wounded shoulder. The deputy sent statements from Clarkâ€™s frightened cellmates and information about the incident to the SLO District Attorneyâ€™s office. If found guilty of the assault, Clark could be sent to state prison for breaking his probation.

But thatâ€™s not going to happen. On April 25, the SLO County District Attorneyâ€™s office decided not to press charges and sent the sheriffâ€™s office a letter of rejection. â€œI donâ€™t know why they rejected it,â€? says Steve Bolt, SLO County undersheriff. â€œThis would technically be a violation of his probation.â€?


Clark is currently serving time for randomly assaulting a pedestrian (who turned out to be a county worker) on January 26. John Siebert was walking along the 500 block of Higuera, when, without explanation, Andrew Mitchell, 19, lunged a skateboard into Siebertâ€™s side. Then Clark came up from behind and swung a two-foot hitching chain with a nine-inch square piece of metal attached to one end at Siebertâ€™s head.

Fortunately, Seibert instinctively turned around and was able to block the blow with his forearms. After an unknown citizen ran across Higuera to assist Seibert, Clark and Mitchell fled the scene, but they didnâ€™t get far before the police caught up with them. Clark was ordered to serve180-days in jail and three-years probation for assault. He is slated to be released this summer.

Now sporting a Mohawk, Clark brags of belonging to the Mohawk gang. â€œHe said he liked messing people up,â€? says Bradley Fox, an inmate who witnessed the attack. â€œHe was bragging about beating the shit out of a guy with a skateboard. Woods asked Clark to leave him alone, but Clark spit in his face and started hitting him.â€?

Filing Deputy Jerret Gran says he does not remember why he rejected the request, because on April 25 he looked into more than 50 cases. âˆ†