Todd Haynes (Velvet Goldmine, I'm Not There) directs this historical legal thriller about corporate defense attorney Robert Bilott (Mark Ruffalo) who takes on an environmental lawsuit against DuPont, which he links to a number of deaths and illnesses caused by its pollution and practices. (126 min.) 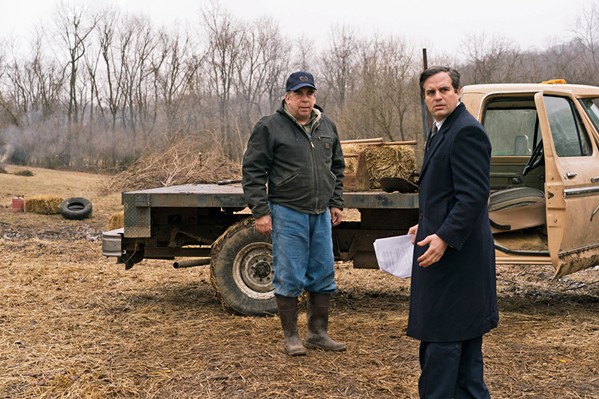 Glen If you're short on corporate outrage, this is the film for you. It's a stark reminder of how toothless the Environmental Protection Agency is, how corporations essentially own the government, and how corporations ARE NOT PEOPLE! They might be run by people, but they're soulless money-generating entities devoid of morality. As the film starts, stolid, stoic attorney Robert Bilott has just made partner at Taft, a law firm that specializes in defending chemical companies. The firm would love to land DuPont as a client, but instead, a couple of farmers show up from Bilott's hometown claiming something connected to a DuPont landfill is killing their cows. Long story short, Bilott takes their case and is soon suing DuPont, much to the chagrin of his boss, Tom Terp (Tim Robbins), who reluctantly agrees to allow him to work the case but to be "surgical"—in and out as quickly as possible. Instead, Bilott has embarked on a case that will drag out for decades and put his job, family, and health on the line. Unlike, say, a John Grisham potboiler, what Dark Waters depicts is the tedious grind of law practice, the painstaking work of scouring files, looking for the needle in the haystack that will prick the corporate balloon and hold it accountable for its wanton greed. If you're expecting courtroom theatrics, there's very little of that. Instead, this is the story of an unlikely hero whose tenacity, steadfastness, and deeply held morals made him into DuPont's worst nightmare—a man who couldn't be bought, scared off, or worn out.

Anna This one wasn't conjured in a writer's mind—the story's true telling speaks to the tedious and seemingly insurmountable task it is to take on a company as ubiquitous as DuPont. Its "better things for better living ... through chemistry" motto is a wickedly sharp double-edged sword. The West Virginian towns and their downtrodden residents are reliant on DuPont's jobs, even if it means it may kill them. Cancers, birth defects, rotten teeth—this community has it all, and the source seems to be coming straight from the tap. Ruffalo plays Bilott as a steadfast underdog, unwilling to be bested by the odds against him. He's a family man whose "Lady Lawyer" wife, Sarah (Anne Hathaway), gave up her practice to be home with their kids, but who is nothing less than an advocate and fierce fighter in her husband's corner. Still, the case takes a toll—it lasts years and years and means pay cut after pay cut. After all, it isn't like these rural farmers have any big city lawyer money to throw around. Once DuPont's Phil Donnelly (Victor Garber) realizes that Bilott will not be appeased easily, the brick wall is swiftly thrown up. Bilott is delivered a roomful of "discovery" documents. Little do those DuPont lawyers and executives know the lengths Bilott's tenaciousness extends to. This guy won't give up without a fight, and fight to the end he does. Both infuriating and satisfactory, this film is quiet and fascinating. It left me ready for a fight with the big dogs.

Glen It's pretty infuriating that big corporations get away with this stuff. At one point the EPA fines DuPont. I don't remember the exact amount, but it was millions of dollars ... which added up to three days' worth of DuPont's profit from their poisonous Teflon coating. Multi-million-dollar fines mean nothing to multi-billion-dollar companies. It's pocket change. How can we expect corporations to protect the public trust if it's cheaper to poison us and pay a token fine for it? Ruffalo and Hathaway are terrific together. They have a natural chemistry and embrace their characters wholeheartedly. Sarah is a devout Catholic who wants her sons to be just as devout. She's both subservient toward and committed to her husband, but when she sees him falling into what seems like an obsessive conspiracy theory, she's forced to assert herself. Ruffalo plays Robert like a nondescript frump, a kind of hangdog everyman. He only seems to come alive when he's holding DuPont's executives accountable. I loved it when these corporate titans were forced to confront the results of their bottom-line decision making—the kids with birth defects, the line workers with cancer, the dead. I also have to give kudos to Bill Camp, who stars as farmer Wilbur Tennant. Camp is one of those character actors who can disappear into a role. Joker, 12 Years a Slave, Birdman or (The Unexpected Virtue of Ignorance), The Killing of a Sacred Dear—he's been in a ton of amazing movies, but you don't remember him because he becomes his character. Here he's hidden behind bushy eyebrows and a gruff rust-belt voice. This is a gripping film and a sad indictment of the government institutions that are suppose to protect us but too often don't.

Anna Camp is a total asset to the film. His gruff, no-nonsense farmer is who gets the snowball rolling toward big, bad DuPont. However, most of the West Virginians who have borne the brunt of DuPont's wicked lies are not necessarily eager to recognize the company as villains. DuPont's a job provider, the bread and butter of the community—their logo is on everything from baseball fields to recycling cans. The film is effective enough to make you want to throw away all the nonstick cookware in your pantry and only drink triple-filtered water. This poison is in everything from your pans to your carpets—unborn babies aren't even safe from the effects. As the framework of what ultimately is a huge coverup comes to light, DuPont's culpability is poignantly clear. Bilott's a frump, but a clever one. He'll plod along through every sheet of paper DuPont can throw at him, his natural curiosity and professional prowess leading him to pick at every loose thread and question the most mundane memos. Drawn-out courtroom antics leave class-action plaintiffs feeling left high and dry, but Bilott will not be scared away from fighting the good fight. If you don't mind getting riled up by an infuriatingly true story, this film is a total gem. Just be prepared to throw out all your Teflon goods as soon as you get home from the theater. Δ