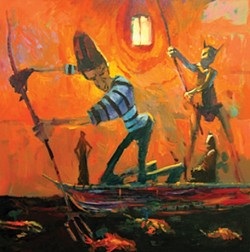 # A toy Godzilla looms out of a canvas, his body squat, his aspect ominous. A metal spring attached to his back almost belies the words etched into the canvas behind him: MONSTER. Mike Tracy has painted this figure dozens of times: the wind-up toy's left profile at various angles, facing the viewer, the right profile. Almost always, the toy possesses a spark of life, a factor that compelled Tracy to begin painting wind-up toys many years ago.

I think a friend gave me my very first wind-up toy, maybe 25 years ago. I thought that while they were great objects of whimsy they're toys, but they're stand-ins for animate objects, he explained. They're mechanical, but they're very poor simulations. They're clumsy and awkward and horrible. When you stop and really focus on them, they kind of take on a Frankenstein dimension to them.

Tracy's wind-up toys are among the 35 images and five sketchbooks that will parade their way into the San Luis Obispo Art Center in a lavish display titled Tales, Toys, and 'Toons, on display from April 11 to May 25. Large and small paintings, etchings, and a rotating display of Tracy's sketchbooks all selected by Art Center curator Gordon Fuglie will fill the Gray Wing with a colorful and menacing cast of characters, everyone from Mickey Mouse to faceless, spindly-legged beings. Don't let the show's title fool you Tracy's toys and 'toons wouldn't be misplaced among the battle-ready creations featured in the 1992 film Toys.

The Los Angeles-based artist began his career after acquiring a bachelor's degree in fine art in 1975 and a master's in painting in 1976 from CSU Los Angeles. His plan was to become a teacher and artist, but the passage of Proposition 13 effectively eliminated any potential college-level teaching jobs. After several years performing what he refers to as real jobs, Tracy returned to his painting, maintaining a reasonably successful career as a studio artist during the '80s and early '90s.

# In 1994, Tracy entered the animation industry, working as a background designer for animated films on behalf of the likes of Disney, Warner Brothers, and Sony. As reluctant as he was to allow this work to influence his separate career as an artist, Tracy admits that working with the people who gave life to a host of make-believe characters and figures including walking, talking, plotting children's toys may have influenced his transition from painting landscapes and still lifes to toys.

I ran into a place about 10 years ago where I simply could no longer paint landscapes, he explained. It's not that I didn't want to paint them, I just couldn't paint them anymore, and I realized that one of the things that was missing was a sense of a focal point or an emphasis.

He spent years seeking out a subject that suited his natural artistic bent, and what he eventually lit upon was something he had been avoiding for a long time for fear it wasn't a serious direction for an artist to take. And as soon as he ceased to repress his inclination toward the dark and playful, the images poured onto the canvas.

These images now exist completely independent of his work in 2000, he segued into his original career of choice, and in the past eight years has taught art classes at the Art Institute of California in Orange County, Woodbury University in Burbank, and CSU Channel Islands. While many art instructors complain that their work in the classroom saps creative energy from their own artistic endeavors, Tracy insists that the opposite is actually the case. By limiting his days in the classroom to two to three per week and maintaining a hands-on approach to student learning, Tracy has come to view his commitment as an educator as aesthetic body building.

Tracy starts his day at 4 a.m. with several hours of drawing. The beauty of the early hour is that it releases the fluff and nonsense

# of the previous night's dreams. Any topic or subject is fair game musings on the connection between shame, honor, and courage may produce images of Lavinia from Titus. Tracy wouldn't necessarily characterize the resulting images as cerebral, though he has invested thought and contemplation into their development.

I'm constantly thinking about this collective set of realities that we so easily switch back and forth between dream state, Tracy explained. And sometimes just driving down the freeway can be an exercise in swimming in a collective other reality.

The painter began the expensive and time-consuming process of etching in 2007, while sharing a studio space with an etcher and printmaker. During that year, he produced about 20 editions of his wind-up toy images. What he ultimately decided, however, was that he was at a stage in his life where his art should be fun, and printmaking didn't meet that qualification. In all likelihood, the etchings at the exhibit will be among his last, as will any paintings of wind-up toys. Tracy believes that, for him, the alternately whimsical and eerie toys have shuffled their last.

The toy master will, however, continue his exploration of light and dark what he calls the messier stuff. That includes mortality and ugliness. How that will translate to viewers in San Luis Obispo remains to be seen. And Tracy isn't indifferent to the responses his images generate.

We all have our light and dark sides, he concluded. I have these two conflicting requirements of myself. One is that I explore that part of my existence, but also the other part is that I make things that look good over the sofa, you know? I don't necessarily want to scare the hell out people just for the sake of scaring the hell out of them.

Tales, Toys, and 'Toons printings, paintings and pen-and-inks by Mike Tracy will be on display at the SLO Art Center's Gray Wing from April 11 to May 25. On May 2, from 6 to 8 p.m., there will be an artist reception in conjunction with Art After Dark. The Art Center is open from 11 a.m. to 5 p.m. every day except Tuesday. For more information, visit www.miketracy.net or www.sloartcenter.org.