At a meeting on March 3, 1992, the San Luis Obispo City Council discussed an ordinance that would have prohibited discrimination on the basis of sexual orientation in employment, housing, and businesses throughout the city. Of the roughly 130 county residents who shared their thoughts at that meeting, about 50 opposed the proposal.

The heated conversation ended with council members voting 3-2 to hold off on any formal action, sparking a long and often explosive debate over gay rights and discrimination in SLO County.

That was around the same time that SLO County resident Dave Congalton launched his talk radio show, Hometown Radio, which aired for the first time in January 1992 and is still running to this day.

Thanks to SLO's proposed ordinance, Congalton covered gay rights issues on his show almost immediately. He remembers thinking that much of the opposition to the gay community in the '90s was based on stereotypes and that many of the arguments against nondiscrimination were lacking facts. He remembers feeling that he had to do something to help better educate his audience and the community as a whole.

Congalton's brother-in-law is gay, and Congalton said knowing someone who had lived through harassment and discrimination over his sexual orientation helped shaped his views.

"That really opens up your mind," Congalton said.

Congalton thought it might help to put a face on the issue locally. He brought members of a local chapter of a national advocacy organization, Parents, Families, and Friends of Lesbians and Gays (PFLAG), onto his show regularly. There, they discussed various gay rights issues and fielded questions from listeners.

The segment tapered off over the years as the general public became increasingly accepting of the gay community. But recent conversations across the U.S. regarding transgender people—debates over whether trans women and girls should be allowed to play sports, what public bathrooms trans people should use, and whether teens should be able to access hormone treatments—remind Congalton of the early battles over gay rights.

He gets a lot of gender-related questions on his show, he said, and he hears a lot of stereotypes and misinformation. So Congalton is bringing back the LGBTQ-focused segment, this time with two representatives of the SLO-based Gala Pride and Diversity Center.

"This is really important that we have this conversation," Congalton said. "It's kind of, for me, like going back to my roots." 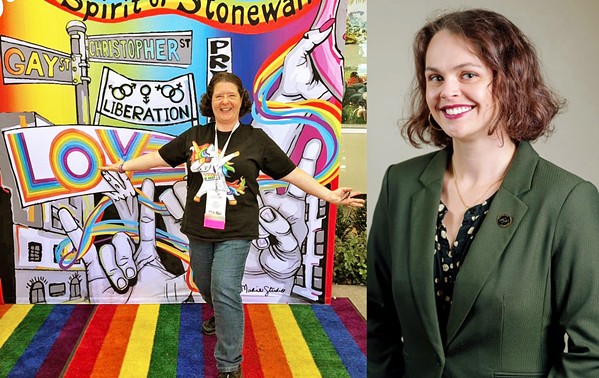 Congalton invited Michelle Call, Gala's executive director, and Serrina Ruggles, Gala's center coordinator, onto Hometown Radio on March 5, where they discussed the Equal Rights Amendment, transgender rights, and fielded live questions from listeners. They hope to do similar segments once a month for the foreseeable future.

"It is clear from previous conversations and broadcasts that many of you have different opinions when it comes to transgender issues," Congalton said to his listeners on March 5. "But I also submit that, with respect, I think a lot of you need to be a little bit more educated. And before you start yelling at the radio, I include myself in that list. I think that I need to understand and educate myself more. And to the extent that I can use that goal and use this show to promote that goal, I'm on board."

Although Congalton is a left-leaning independent, a good chunk of Hometown Radio listeners are conservative. That gave Ruggles, who identifies as nonbinary and bisexual, some pause. They (Ruggles uses both they/them and she/her pronouns) weren't completely confident that all the live phone calls would be respectful. But Ruggles was pleasantly surprised. Most of the callers just wanted genuine answers to their genuine questions, and Ruggles was happy to oblige.

Hearing directly from a person with those lived experiences on the radio changes that to some extent, they said. And so far, Ruggles said, the local reaction has been overwhelmingly positive.

Call agreed and said that while some questions are tough to answer, that's all an expected part of the education and discussion process.

"In fact, we really want people to be able to ask their questions and that's part of why we're doing it," Call said. "And similar to Serrina, especially after the last episode, I got quite a lot of feedback from folks who were saying that there were things they were understanding for the first time."

That's the kind of response Congalton is hoping for, although he said he's sure a number of his most conservative listeners just change the channel the second they hear anything about LGBTQ-plus rights.

"I have no false illusions about, 'Oh, I'm going to convert San Luis Obispo,'" Congalton said. "But they deserve to heard."

He's encouraged, however, by where the county's at with gay rights. When he first started hosting Hometown Radio, a significant percentage of locals didn't even want gay people to have basic protections from discrimination. Now gay marriage is legal and sexual orientation, Congalton said, is generally "no big deal." He hopes to see the same happen for the transgender community. The first step, he said, is talking it out.

"I have an open microphone policy," Congalton said. "People come on and they talk, and I let the audience decide." Δ