Dave Hughes skydiving business caters to the stars, and anyone else

If your loved one craves the gift of free fall, Skydive Santa Barbara offers one of the highest jumps around.

Over in Lompoc, the skydiving company serves the entire region, hosting 7,000 to 8,000 divers a year. Many would-be jumpers come all the way from Los Angeles to step out the airplane door.

Dave Hughes, owner of the company, said his skydive operation is renowned, partly, because of its plane. Called a Supervan 900 Caravan, the single-engine Cessna cost Hughes $1.6 million. But it was worth it, he said, because it allows him to get divers up to an altitude of 18,000 feet—so high that they're hooked up to oxygen. That's his priciest jump at $269. It's about a minute and a half of free fall with full view of the coast and the splashing waves of the Pacific. The most popular jump, he said, is the 13,000-foot option, which is one minute of free fall for $169. Eight-thousand feet will cost $139.

Hughes' plane was even featured in the film San Andreas, starring Dwayne "The Rock" Johnson. Hughes himself was in an American Express commercial, jumping out of an airplane. 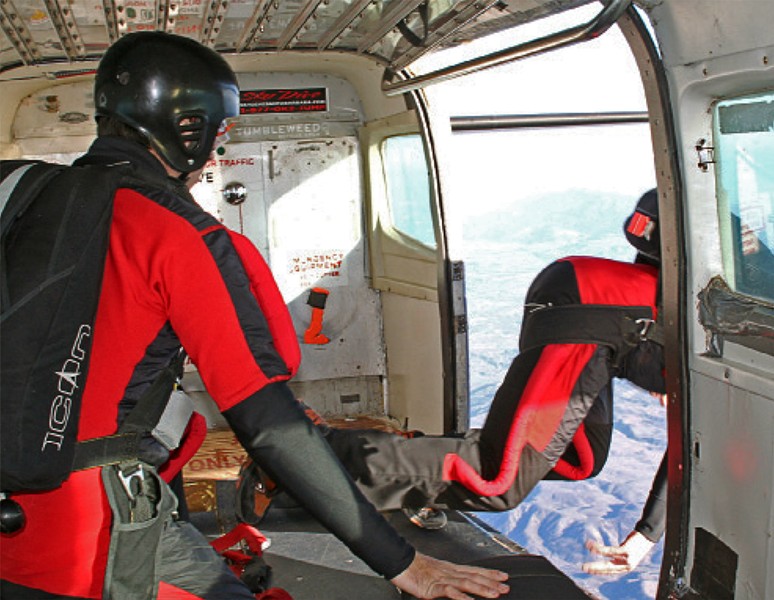 "The guy jumps out first and gets on his knee as the girl is coming down," he said. "Usually the girls are crying before they ever reach the ground."

They require completion of two tandem jumps in a 30-day period, where divers will learn how to pass their assisted free-fall program. That comes after the initial jumps, and it includes a number of jumps—about seven—and four to six hours of ground training. The ground training and first dive run cost $364.