David Attenborough: A Life on Our Planet lays out humanity's devastating impact on Earth and suggests a way to fix it

DAVID ATTENBOROUGH: A LIFE ON OUR PLANET

Calling it his "witness statement," natural historian David Attenborough lays out his case against humanity's impact on the natural world, demonstrating through three evolving statistics—world population, parts per million (ppm) of carbon dioxide in the atmosphere, and percent of worldwide wilderness—the increasing damage humans have done. In 1937, when Attenborough was a boy, the stats were 2.3 billion people, 280 ppm, and 66 percent wilderness left. Today, just 83 years later, we're at 7.8 billion people, 415 ppm, and just 35 percent wilderness. He makes the case that the Holocene period is being eclipsed by the Anthropocene, a sixth mass extinction on Earth and the first to be caused by a species—humans. (83 min.) 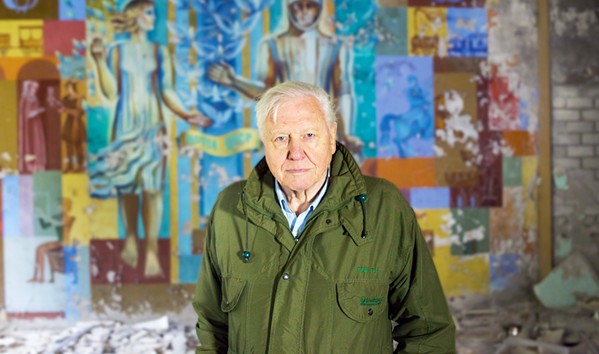 Glen In case you're not depressed enough, tune in to Attenborough's new Netflix documentary A Life on Our Planet, which opens with the famed British broadcaster walking through the ruins of Pripyat, the Ukrainian town that was abandoned after the Chernobyl meltdown—one of the many "mistakes" humans have made during their stewardship of Earth. As he looks through the deserted town, he narrates key moments of his life and work with the BBC exploring untamed places, from Africa's Serengeti to the Arctic, from the rainforest to Antarctica. Over his long career, he explains that he's seen firsthand the effects we've had on the planet we call home—the loss of biodiversity, the dying ocean coral reefs, the greedy harvesting of natural resources. It's a remarkable condemnation of human activity, a stunning rebuke of our behavior. But he notes something important—now devoid of human presence, Pripyat is returning to the wild, with flora and fauna flourishing. Despite what we've done, Attenborough sees a path out of our mess by re-wilding the world.

Anna A path perhaps, but an increasingly narrower one to be sure. At 94 years old, Attenborough has certainly seen a lot of change over his lifetime, but he recognizes that even in his early days, humanity was already on a path to destruction. While our usual association with his work and voice is centered on the natural beauty of land and sea, this scathing look at our disregard for the destruction and ruin we're responsible for weighs heavy. Attenborough supposes what will happen in 10, 20, 50 years down the road if we stubbornly refuse to take our stewardship of the Earth seriously. Eating a plant-based diet, turning toward renewable energy, and ending our exploitation of the natural world to gain unsustainable resources are all key to healing what we have blatantly destroyed. I don't have much faith that most people are interested in giving up their comfort or habits to heal the world, but luckily for our planet, we will destroy ourselves long before we destroy nature's ability to overcome. It's a grim truth, but one we would do much better to learn now rather than later.

Glen I agree. I think he's more hopeful than I am at the prospect of humankind righting its wrongs. The bottom line is there are just too many of us, and the poorer and less educated are most likely to produce the most children, continuing the cycle. Raising living standards and education access for all is the key, and Attenborough does point to a handful of examples of regions making the right choices, such as Costa Rica's reversal of its deforestation, Palau's rebuilding of its fisheries, and the Netherlands' innovative land use and agricultural practices. Mixing gorgeous shots of nature with horrifying examples of human destruction, it depicts a civilization at a crossroads. Will we continue down this selfish path, turning our whole planet into Pripyat, or will we have the political will and wisdom to make the sacrifices and hard choices to save ourselves and our home? Attenborough is hoping for the latter rather than the former.

Anna It's a hard look at a difficult subject, and not one that's easy to confront. The beauty of nature contrasted with the ugly truth of destruction is an effective method for getting his point across, and Attenborough is adept at presenting both truths. He's a treasure as a filmmaker and advocate for nature, and the fact that he's still at it at 94 years old is a gift. Is this film a big bummer? For sure. Does it still offer hope? Yep. I have no doubt that Attenborough has to keep hope alive to continue his work. Perhaps it will serve to educate and inspire, surely what it is meant to do as opposed to depress and dishearten. I encourage all to watch, just know A Life on Our Planet may not leave you feeling a whole lot of faith in things actually turning around. It's an important look at the harsh reality we live with today. Δ