Come to the opening!

Artist David Settino Scott displays sculptures
from A Pure Working, his series that remembers
those who have self-immolated as a form of protest,
through March at the Steynberg Gallery. An opening
reception will be held on Friday, March 2, from 6 to
9 p.m., with the artist in attendance.

In 1963, photojournalist Malcolm Browne won the World Press Photo of the Year for an image of Vietnamese Mahayana Buddhist monk Thich Quang Duc, who set himself on fire on a busy Saigon street. The image shocked the world and burned itself into the psyche of San Luis Obispo painter and sculptor David Settino Scott.

Decades later, Scott—a former Navy sailor, flight instructor, and Hollywood special effects specialist who worked on Star Wars (1977) and Caddyshack (1980) among many other films—began a project that's become an obsession: A Pure Working, a tribute to Duc and others who sacrificed themselves to draw attention to injustice. 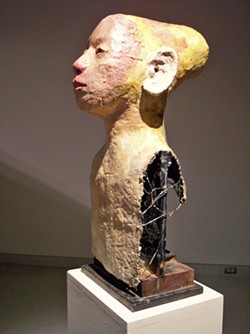 This month, several of Scott's sculptures from the project will be on display at the Steynberg Gallery. How did it all begin?

"The first sculpture got started when I dropped some acid in the studio one day. I don't care if you write that! Fuck it! I don't care anymore! I was working on a piece of sculpture inspired by Egyptian archetypes and suddenly I saw this monk," Scott recalled. "The sculpture started looking Asian and I felt the presence of a monk, the first one who burned himself in 1963—Thich Quang Duc—and I guess the acid brought it all to a boil and I felt his presence and I wanted to question him. 'How could you do that? How could you set yourself on fire?' To answer the question, I realized I would have to make more of these pieces, and I thought I'd eventually make maybe two or three more, but I ended up making 14."

"That these people are filled with so much love for humanity and they feel so much compassion for the suffering of people that it overwhelms any feelings of self-preservation," Scott responded. "Think of it like this: If someone saw a child in front of a bus, and they jumped in to save that child, sacrificing themselves, that's an instantaneous human reaction, but this is beyond that because it isn't instantaneous. It's a well-considered and thought-out action."

It's also a horrifying prospect, and Scott's feelings about self-immolation are admittedly complicated. On one hand he admires people like Duc.

"Yes, I think the kind of love they have is huge and magnanimous and unattainable, actually, for most of us. I could never do that."

On the other hand, he's concerned that celebrating their sacrifice can be misinterpreted.

"I want to say that, first of all, I recognize their sacrifice and I don't want these people to be ignored or forgotten, but I also don't want people to think that they should do that to themselves because I don't want to inspire people to do that. It's too over-the-top self-destructive and it accomplishes nothing, so I'm totally opposed to it. I want to stress that because some people are crazy and may run with it; maybe they're already suicidal and they'll do it because they think it will make their suicide seem beautiful, but I don't want anyone to get that kind of idea." 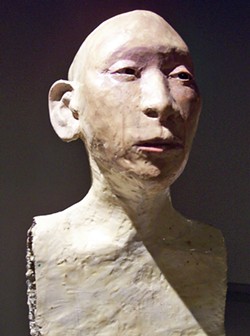 Of course, Scott doesn't really believe it accomplishes "nothing" and admits that when Duc set himself on fire in Saigon to protest persecution of Buddhists by the South Vietnamese Ngo Dinh Diem regime, it raised awareness around the world.

"Yes, I think it does accomplish something. You're right, but I'm just opposed to anyone doing it."

Five months after Duc's act, a U.S.-backed coup toppled Diem, who was assassinated. America was suddenly entrenched in the Vietnam War. It's this sort of history Scott hopes to highlight in his proposed The Peace Project, which he's actively fundraising for. He dreams of finding a permanent location and building a museum for A Pure Working, which includes the 14 monk sculptures as well as a large two-sided 9-by-12-foot hinged and free-standing painted screen.

"I envision a space, a sanctuary that's devoted to the recognition of our intense desire for peace, a place for meditation and educational lectures and practices that would promote the message of compassion, empathy, and gratitude," Scott writes on his website.

Green building and sustainable architect Ken Haggard's architectural model and drawings for the proposed space will also be on display in the Steynberg Gallery.

"What we need is a location, more than money, and I really want the location to be an institute of higher learning," Scott said. "I've had friends say, 'Go where the money is. Come to Montecito and we'll help you build it here,' but no, I owe something to San Luis Obispo and this is where it should be located." 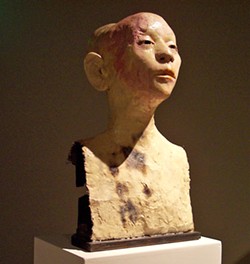 Scott hopes Cal Poly or Cuesta College will dedicate some land to the project, and Scott plans to raise the money to build the structure and create an endowment for continued maintenance.

"People need to revisit the past instead of forgetting about it, and young people today are much more aware. ... They deserve to know their history and have a place of quietude where they can meditate on it," Scott said. "Nobody goes to church anymore—it's passé—but people need guidance from philosophy, psychology, poetry, and the arts. As Santayana said, 'Those who cannot remember the past are condemned to repeat it.' This is really a plea for land, a place to build this sanctuary. We need a promise from Cal Poly or Cuesta that they would donate some land. That's where it should go rather than a private place."

It's worth noting that this form of ritual suicide continues. On June 23, 2014, Charles R. Moore set himself alight in a strip mall parking lot to protest social injustice. Scott dreams of the day these sacrifices are unnecessary. Δ