The owner of Cheap Thrills record store in SLO has sued Best Buy for $4 million, citing unfair business practices since the retail giant moved into town in 2002. 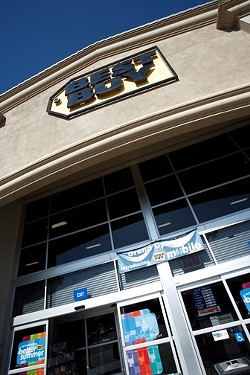 The suit was filed in August last year in SLO County, but has since moved to federal court at Best Buy’s request, where it is expected to be heard later this summer in Los Angeles.

The gist of the claim is that Best Buy has made a habit of selling popular CDs and DVDs at below cost. The complaint goes on to say that Best Buy routinely advertises these prices during release dates, which is typically when the highest volume of CDs and DVDs is sold.

Cheap Thrills owner Richard Ferris is seeking $4 million in compensation because of the alleged below-cost sales, commonly called “loss leader sales.” It’s a fairly common business strategy that retailers use to attract consumers to their store with a bargain, but sell them more expensive merchandise. Basically, according to the suit, it’s come for the cheap CDs, leave with a new CD player.

A call to Best Buy’s attorney was not returned by press time.

Cheap Thrills, located at 563 Higuera Street, has been in business in SLO since 1971, selling primarily music and movies. Best Buy, located at 221 Madonna Road in SLO, sells popular music and movies, as well as computers, cameras, TVs and a host of other electronics.