Dawes has always made great music, but on their fifth album We’re All Gonna Die, they’ve become masters of melody, sultans of story, and philosopher kings. Look no further than the album’s title track:

“Hey kid at the show tonight/ The face beyond the barricade/ How ya dance and ya sing to every single line/ Like it was you up on that stage./ I need to know your secret,/ I’m asking you for help./ How do I fall in love with anything/ Like you seem to do so well?/ I gotta get back to when it came out/ The way it was supposed to sound/ Before money was ever changing hands/ And my feet were on the ground./ When I could feel the wind’s direction,/ When I knew what songs to sing./ And he said, ‘Try not to get upset./ Let it all go by./ Because how can it be that bad,/ If we’re all gonna die?’” 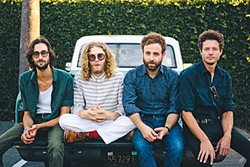 Cynicism, commercialism, existentialism, nihilism—that’s a whole lot of isms to cover in a soulful, falsetto-sung, ballad with a hook that’ll dig into your skin and refuse to leave. It’s just one of 10 tracks on the new album that range from soul searing (“Roll Tide”) to butt shaking (“When the Tequila Runs Out”) to empowering (“Quitter”).

Penned by lead singer and guitarist Taylor Goldsmith, the songs are nothing short of amazing, especially on tracks like “For No Good Reason,” which explores the often-unexplainable world of human emotion.

“His wife asked, ‘How were things at work today?’/ as Bill walked through the door/ and put his coat on the chair and his keys on the table/ and his eyes down on the floor,/ and he tightened his jaws and he thought of the cause/ and effects weren’t clear anymore,/ figuring out how to say what’s wrong// He said, ‘I know that I’ll be leaving you, that’s all I really know,/ but I wish I could tell what exactly compels/ me to turn my steps and go,/ because there’s so much love that you’ve given me,/ and so much love that I owe,/ it’s with myself that I can’t seem to get along.’” 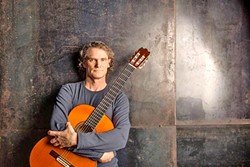 There are devastating moments within these songs, which you can hear live this Friday, Jan. 13, when Dawes plays a Good Medicine Presents and Numbskull Productions show at the Fremont Theater (8 p.m.; all ages; $22.50 presale at ticketfly.com or Boo Boo Records).

New Times spoke to Goldsmith via phone, asking first about the evolution of their sound.

“Maybe ‘evolution’ is a good word to describe it because it does feel like the natural next step, which we’ve always done from album to album. We want to inspire ourselves as musicians, and as a songwriter back in 2009 recording that first record, all we needed were two acoustic guitars and two guys to scratch that itch, but later on your experiences become more nuanced and more developed. I want to feel something I haven’t felt. I really do believe that’s what every artist has to do, to constantly grow and develop. Of course, first and foremost is the audience. When a songwriter tries to re-create what they’ve already done, the audience can smell that from a long ways away. So how do we keep ourselves inspired? By creating something we haven’t heard before.”

Goldsmith’s lyrics seem to have become more complicated, nuanced, and deep. Does he agree, and if so, what’s changed with him?

“Um, I love that idea and I hope that’s true, but I wouldn’t have thought that of myself. For me, I guess what’s changed is that I’m no longer that guy in his 20s who’s had his heart broken, who ignorantly doesn’t consider other people in the decisions I make, and who’s no longer exploiting my own mistakes. As I look back on some of the songs, I think, ‘Wow, you’re really sharing a lot,’ more so than I would be comfortable now.”

Goldsmith realized that it’s dangerous for a songwriter to depend solely on biographical material, which can sabotage your life, and on this new album, he consciously worked on writing from a constructed character’s point of view, making the songs like vignettes offering glimpses into other lives.

"I wanted to go beyond my own experiences and be in other people’s heads, to think about experiences I haven’t had and how to roll with the punches as that character, not as me. You think of albums like Dylan’s Blood on the Tracks or Warren Zevon’s self-titled album, and those songs are like short stories, like worlds you’re invited into.”

Dawes is blowing up, with lots of television appearances and a 50-date tour, and the actress and singer Mandy Moore is Goldsmith’s girlfriend. He may officially be a rock star now, but if he is, Goldsmith hasn’t quite got the hang of it. He’s far too humble. 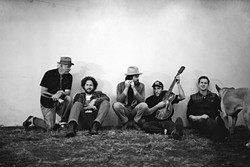 “‘Rock star’ is such a nebulous term. I feel like every artist we like, whether it’s a rapper or Bruce Springsteen, we like because that artist is true to who they are and honest with themselves. Bruce is the boss, and to be honest, I feel like the Woody Allen of frontmen. I never feel like this guy with bravado or attitude strutting across the stage. Being a rock star has always been my dream—it’s why I picked up the guitar—but I’ve never quite felt like one.”

And now you’re hitting the road for 50 shows. Are you guys crazy?

“I remember watching an interview with Shaquille O’Neal and him being asked whether he was the best when he was playing basketball, and he started talking about this player or that player having better footwork or a better outside shot. As dominant and good as he was, he could recognize his weaknesses. In Dawes, it was never about being the best guitar player or the best singer or the best songwriter; the only chance we ever felt we had was if we out-hustled everyone else. If we can keep playing shows, keep the fans interested, we’ll do it.” 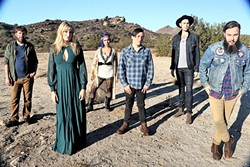 Other Numbskull and Good Medicine shows this week include reggae/EDM duo Unified Highway, featuring Eric Rachmany of Rebelution and Amp Live of Zion I, on Saturday, Jan. 14, at the SLO Guild Hall (7 p.m.; all ages; $15 at ticketfly.com). Check out their cover of R.E.M.’s “Losing My Religion” on YouTube.

“Over the years, I’ve taken my music and tried to cross-pollinate it with music from different parts of the world,” Cook explained in press materials. “For the [2003} album Nomad, I went to Cairo and recorded with musicians there. On my [2009] record The Rumba Foundation, I went to Colombia, and worked with musicians from Cuba as well. On [1998’s] Vertigo, I went down to Lafayette, La., and recorded with Buckwheat Zydeco. For me, the question has always been: Where did you go? Where did you take your guitar?” 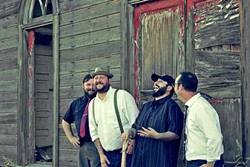 LA’s indie-Americana-rock act The Sound of Ghosts plays Last Stage West this Saturday, Jan. 14 (6 p.m.; all ages; free), to promote their debut album Come Home. What began as a collaboration between husband and wife James Orbison (bass, vocals) and Anna Orbison (vocals, ukulele) and Ernesto Rivas (guitar) has grown to add Jon Sarna on drums, Christian Robinson on trumpet, and Phoebe Silva on fiddle and mandolin.

Saltwater hits Frog and Peach this Saturday, Jan. 14 (10 p.m.; 21-and-older; free). Hailing from the Central Valley, these guys play everything from bluegrass to rockabilly, and from jamming to shoegazing. Gritty vocalist Travis Brooks plays cigar box guitars of his own construction.

San Diego-based singer-songwriter Astra Kelly plays the Frog and Peach on Sunday, Jan. 15 (10 p.m.; 21-and-older; free). Her melodic folk melodies and crystal clear vocals are firmly in the tradition of performers like Joni Mitchell or Jewel.

The 17-piece San Luis Obispo Symphony Chamber Orchestra under the baton of Chris Woodruff will present The Magic of Mozart, which will feature a handful of the prodigy’s masterpieces at the Mission San Luis Obispo de Tolosa on Sunday, Jan. 15 (3 p.m.; all ages; $35 general or $25 for seniors available at slosymphony.org). Los Angeles Master Chorale Soprano Anna Schubert is a featured soloist.