Dead in the water

Officials say illegally moored boats in Morro Bay are polluting the water and creating a hazard; next month they'll start removing them

Windy Cove; also known as the no-man's-land of Morro Bay.

From the Rock to the sandy, shallow inlets along Los Osos, the bay is divided up into an almost-checkerboard of law enforcement jurisdictions. But inside those lines is an anomaly: Windy Cove.

Over the past three decades, dozens of boats have moored in this backwater hideaway. And while it's never been legal to do so, the agencies that fiercely guard the rest of the bay have turned a semi-blind eye.

But now the situation has gone too far, say law enforcement and environmental officials. Citing concerns about raw sewage, environmental and navigation hazards, and even crime, wardens with the state's Department of Fish and Game will begin the process of removing the boats next month.

The cove is part of a tract of the bay that's owned by the state's Land Commission and has been leased out by the California Department of Fish and Game for more than 30 years. Patrol Lt. Dean Hileman, who's spearheading the effort to remove boats, said that over the years his department hasn't enforced the no-mooring laws in the area for several reasons: namely money and not enough wardens.

Because of that, the number of boats in Windy Cove today has grown to 35. Some are derelict: neglected, rotten, possibly abandoned. A few others are lived in. Others still are in shipshape condition and simply bob around on their moorings.

Individual boat owners have constructed many of the moorings. Hileman said that others have been put in by those with a more entrepreneurial mind: There are two residents, he said, who rent out their legal moorings up in Morro Bay while living at their own free mooring in Windy Cove. And then there are the people who, Hileman said, have actually put illegal moorings into the cove and then sold them to other boaters.

"I compare it to this: Imagine me taking a cement truck into Morro Bay State Park, pouring a cement pad, and then charging people to stay there. This is what it amounts to. This is not their property; they don't have any rights," he said. 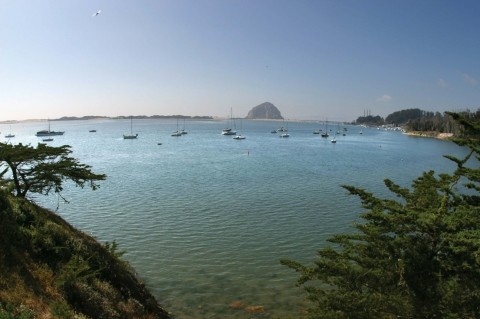 #But it's not an issue of property rights that has state and local agencies concerned about the boats. The officials who oversee Morro Bay have three main worries about Windy Cove: sewage, sinking boats, and crime.

To explain the crime issue, Hileman cited complaints of criminal activity his department has received, and then rhetorically asked, who's responsible for these boats? The Morro Bay Harbor Patrol shouldn't respond because it's outside of their legal jurisdiction, he said, and the Sheriff's Department doesn't keep a boat in the harbor. Which leaves a Fish and Game warden to act like a police officer.

Hileman used a story as an example: A woman who had been domestically abused on a boat, he said, jumped into a dinghy, rowed to the beach, and ran to the State Park where she called 911. Hileman said Morro Bay police responded, but said, hey, this is not in city limits. And the sheriff said it's in Fish and Game's area, they have to handle it. But it's in a county area, Hileman said.

"The question comes up, who is going to deal with burglary, rape, theft, or domestic violence? There's actually been an investigation of child abuse on these boats," he continued. "Again, it goes back to who is going to be responsible for these boats? It's become kind of a no-man's-land."

Endersby couldn't estimate many people are living on their boats in Windy Cove - other officials put the number at about 10 - but described the place as a "last refuge" for boat owners. Endersby, who's been with the Harbor Patrol for eight years, said at least half of the boats have been there longer than him. Some people just like no rent, he said, some boats are abandoned, and some people live there because they have no other place to go.

"Some of [the boats] are maintained; some of them, it's a miracle they're still there. I don't know what keeps them afloat," he said.

Keeping the boats afloat is actually a major environmental concern. Unlike a dock, which boats tie directly to, moorings allow boats to tie up in the middle of the bay in permanent locations. The moorings themselves are essentially permanent anchors: a heavy weight on the sea floor, a chain leading to surface, and float that marks the end of the chain.

But in Windy Cove, Hileman said the moorings are not inspected or held to any standard. Sometimes, he said, they're simply a chunk of concrete or two anchors. And that, combined with a number of obviously horribly maintained boats, could be a recipe for disaster. Both the Harbor Patrol and Fish and Game described boats that have broken free and either overturned or sunk in the last several years - none of which spilled any toxic chemicals.

On an aerial photo of the bay, Hileman pointed at one boat he's especially worried about. He said the boat, called Voyager, needs to have leaking seawater pumped out once a week: "If that boat goes down, we have a very, very big concern about fuel going in the water. We will have a fuel spill."

And it's not just the fuel that's worrisome. Dan Berman, with the Morro Bay National Estuary Program, said batteries - full of heavy metals and toxins - along with hydraulic fluids and motor oils, are also a fear.

"There's a wide variety of hazardous materials on boats that you don't want to end up in the water," he said.

Berman said the risk of sinking is as serious an issue as the other major concern about the boats: sewage pollution.

Over the last two decades, health and environmental agencies have identified several major sources of bacterial pollution in Morro Bay. Los Osos' lack of a sewer is one; spills from the California Men's Colony's aging sewer system is another.

Another is boats in the harbor dumping their raw sewage into the bay.

Every official New Times talked to - whether it was at the Central Coast Regional Water Quality Control Board or the Morro Bay National Estuary Program - said it was impossible to quantify the exact amount of pollution coming from the boats in Windy Cove.

But that doesn't mean they don't think it's a contributor. Berman explained it like this: The boats don't have access to facilities other boats in the harbor do, like sewage pump-outs. And so his agency assumes the waste is going into the water.

#Two other groups voicing concerns about bacteria are the companies who farm oysters in parcels near the cove. Warden Hileman said the state health department has already stopped oyster harvests once because high
E. coli counts in the water. Now, he and Berman said, those companies are concerned about the boats again. This time because the health department will close the oyster beds if the illegally moored boats get too close.

Berman admitted there are other, bigger sources of bacteria in the bay, but he said it's a matter of fixing feasible sources.

"If I could help Los Osos build a sewer, that would be higher on my list. But this is something timely and it's practical and it's something Fish and Game can do right now," he said.

"It's pollution prevented instead of pollution reduction."

To get rid of the boats, Hileman will start in September. First, he and his wardens will stick tags on each of the moorings, alerting the owner that they're in violation of the law. Next, Fish and Game will send a letter to each boat owner, letting them know they have 90 days to leave.

In the letter, the department will even allow for a larger grace period, Hileman said. If an owner writes to the department's regional manger and explains why they need more time, Hileman said, Fish and Game will try to work with them.

"Because we understand that there isn't many places to go. There's some moorings down in Port San Luis, for a pretty reasonable rate. But if you look at Southern California, it's like gold to get a mooring or a slip," Hileman said.

"I'm afraid the Central Coast is [becoming] like that. And unfortunately, moving these boats, the down side is that we're going to create additional pressure on these moorings."

As for the owners that "blow us off," as Hileman put it, and don't respond to the letter and ignore the 90-day limit, Fish and Game will file a misdemeanor criminal complaint with the county's district attorney's office. The boats that are abandoned will be seized with the help of the Harbor Patrol, taken to a launch ramp, dismantled, and shipped to a landfill.

Fish and Game estimates the costs for removal can be divided into two groups: about $125 to remove each mooring; between $2,000 to $5,000 to remove each boat - with the money coming from water quality fines paid by the California Men's Colony.

How hard will it be? Aside from one or two examples, neither Endersby with the Harbor Patrol or Hileman expected too many problems.

"How hard they'd dig in their heels, I don't know. They all know they're illegal," Endersby said.

Hileman said he's hoping to have the vast majority of the boats gone by the end of this year, but laughs as he admits that he might be looking at it too optimistically.

"Some people have told me, 'Oh, you've got a bad road ahead of you.' But I can't think who would be opposed to this. Other than people who'd want a free ride. Which I understand. If I could do it, I'd do it too," he said, laughing. "But from an environmental standpoint, I don't think anyone can argue. This is something that needs to be addressed for the quality of the bay.

"We are the trustees of that property for the state," he continued. "[Removing boats] may sound arbitrary or may sound strong, but it isn't when you consider what we're protecting."