Co-writers Michael Corbin Ray and Therese Vannier will sign copies of their new historical fiction book Dead Reckoning, which chronicles the infamous 1923 Honda Point naval disaster, on Saturday, Sept. 12, in Coalesce Bookstore in Morro Bay from 1 to 3 p.m. If you happen to find yourself in Lompoc on Saturday, Sept. 5, they’ll also be signing books at the Lompoc Veterans Memorial Building outside, in front of the propeller and shaft of the USS Delphy, one of the ships that ran aground during the disaster. While there, the Vets Hall will have the doors open to view a painting of the disaster made by Fulton Leroy Washington, a former Lompoc Prison inmate wrongfully convicted of a drug crime and eventually pardoned by President Obama, who will also attend the 10 a.m. to noon signing. The Lompoc Vets Hall is located at 100 E. Locust Ave.

"Haines turned back to look. Through the fog he could not see the sailors. He could barely see the damaged stern rising up from the water, stilled propellers exposed—and something floating beneath them. A body?

"'Jack?' Haines said. His voice no more than a whisper. He knew the answer. He knew there would be no reply. He knew what he had to do. There was no need to think twice, not even an urge to do so.

"It was too far to paddle back quickly in the ungainly raft, and so he kicked off his shoes and dove beneath the waves and swam." 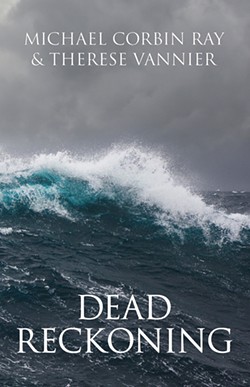 "On Sept. 8, 1923, seven ships of the U.S. Navy's Destroyer Squadron 11, led by Commodore Edward H. Watson on board the flagship USS Delphy, bore full speed into a treacherous section of California coastline informally known as Honda Point," press materials explained. "Traveling south in single file 'follow the leader' formation, the ships were attempting a turn into the Santa Barbara Channel at night in heavy fog. They missed by several miles. One after another, in a span of just minutes, the destroyers jammed themselves to the rugged rocks that would be their fate. It was among the worst peacetime disasters in Navy history."

Twenty-three young men lost their lives that night, and in Cal Poly grad Michael Corbin Ray's new book, co-written with his longtime writing partner, Therese Vannier, they explore the terrible event using a mix of the real people involved as well as fictionalized characters. Written with a cinematic flare, Dead Reckoning makes history come to life, transporting readers to Prohibition-era California and breathing life into historical figures long dead but resurrected through a lucid and period-correct reimagining of their thoughts and actions.

It feels like you're reading a gripping novel, but Ray and Vannier pored through all the accounts they could find of the accident to give it historical accuracy. They even studied the customs and slang of the time to make the dialogue as realistic as possible. It's a propulsive read that's over all too quickly, and afterward, you'll feel like you lived through the disaster yourself and got to know the people involved.

Though currently living in the Santa Ynez Valley, both the authors have SLO County ties. Ray attended Cal Poly and was just his senior project away from an English degree when he abruptly switched to ecology and systematic biology. He met Vannier, who had studied marine biology at UCSB and Cal State Long Beach, when they both worked at the SLO Tribune in 1997.

They had a small design and marketing business in San Luis Obispo for a while, but in the early 2000s, they headed to LA with dreams of getting a screenplay produced.

"We wrote our first screenplay together way back when we were still living in Morro Bay," Ray recalled. "It was inspired by a bad dream. We should have taken that as a warning. It remains unproduced."

They kept writing, eventually turning to books. Dead Reckoning is their second published book after The Long Way, their 2013 historical fantasy about the 19th century Chinese opium wars.

"Mike and I have been besties since we met at The Tribune," Vannier explained. "We hiked across Spain together, circumnavigated Mont Blanc a couple of years ago."

The two friends share a house with another roommate in a "commune" like environment, where Vannier says she uses her "amateur banjo-plucking skills to serenade four big brown dogs through these long pandemic days."

Perhaps one of the reasons Dead Reckoning has such a cinematic feel is the pair's interest in screenplay writing, and also because Vannier is a lifelong learner.

They clearly share a love of storytelling, but they come at it from different perspectives. Vannier says she "was raised on a diet of schlocky horror and martial arts movies from the '70s, while Michael served time as an English major and occasionally aspires to commit literature."

She says their writing process often "devolves into an argument over how much blood is too much blood."

Despite their better judgement and fully aware of the long odds of seeing it produced, Ray and Vannier are again working on screenplay.

"Anybody have a few spare tens of millions of dollars lying around [to produce it]?" Vannier quipped.

In the meantime, they say they'll continue to write books.

"We have a big backlog of stories to tell in this newfangled format," Vannier said. Δ