Sometimes all you need are throaty vocals, ripping guitars, crashing cymbals, and two minutes to deliver ’em. That’s what rock used to be all about before over production, Auto-Tune, and matching outfits snipped rock’s stones clean off. But the Dead Volts bring the big-hanging hairies back into fashion with We Are Already Dead, a 10-song barnburner filled with pedal-to-the-metal rockers like “Ain’t Dead Yet” and “Not Fair” as well as a few slow burning ballads like “Alaska” and “Late Again.”

Think of these guys as “Dr. Cracker and Mr. Clash,” because they can do the Cracker/Uncle Tupelo thing as easily as the Clash/Hank III thing. More amazing still, this is their first record even though they’ve been tearing up the club and bar scene in the county for years.

“We’re celebrating our debut release with a Friday, Dec. 5, show at SLO Brew (while we still can!) with a grip of other local bands,” said Patrick Hayes of the Dead Volts (7 p.m.; 21-and-older; $10). “American Dirt, Hot Tina, and the Turkey Buzzards will all be joining us with full-length sets that night. Despite the fact that we’re ‘headlining’ the show, it is definitely a showcase night for local bands.”

The album will be digitally released for free via their website, deadvolts.com, but they’ll have CDs for sale at the show, and they plan to press some vinyl in the future.

“We attempted to record what became We Are Already Dead a few times,” Hayes admitted. “Line-up changes and dissatisfaction with early results caused us to scrap two earlier versions of the record. Once the almighty Keith Kurczewski (Bottle, The Booker Tease) joined up on lead guitar, we took another whack at it, which resulted in the final album.”

It’s a head boppin’, boot scootin’, foot stompin’ good time, bringing rock ’n’ roll back into the garage where it belongs! And Kurczewski is in great feedback form. Throw in some whiskey-soaked harmony vocals and some in-your-face lyrics, and viola! The Dead Volts’ new record, um, electrifies! (Sorry, that was shockingly bad, but I couldn’t resist.)

“Following our SLO Brew release show, we’ll be hitting the road to support the record,” Hayes added. “First up is a trip to the Pacific Northwest to do shows with I Can Lick Any Sonofabitch in the House and the Supersuckers.”

Let’s send ’em off in style!

One of the nice things about having The Young Dubliners frontman Keith Roberts live in our area is we can usually count on a Young Dubs show around Christmas. That’s when this relentlessly touring Celtic rock act slows down a bit, so this Thursday, Dec. 4, you can see The Young Dubliners with local rockers Truth About Seafood at SLO Brew (7:30 p.m.; all ages; $15 or $17 at the door). 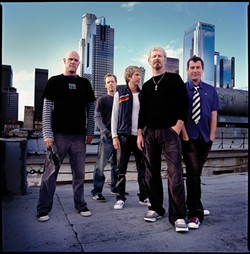 The band’s a favorite both in the States and across the pond. They’ve twice appeared on ABC’s Jimmy Kimmel Live!, had songs featured in TV shows such as Sons Of Anarchy and Human Target, and have opened for everyone, from Collective Soul to Jethro Tull to Johnny Lang and more.

If you haven’t had the pleasure, don’t think The Pogues. Yes, they have a Celtic bent, but they also have plenty of American rock influences as well. In fact, several of the band members have no Irish roots of any kind.

“That was always the idea,” Roberts said in press materials. “The sound was always intended to be a hybrid because we all come from different backgrounds. Even though two of us are from Ireland, a lot of the music we listened to growing up wasn’t Irish at all, but when we got here, we got homesick and developed a new appreciation for Irish music. In truth, the Celtic riffs can just as easily come from the American band members. Everyone writes now so you never know what you’ll end up with when you start on a new album.”

Their newest album from 2013, 9, is aptly their ninth. Though my favorite remains their eighth record, Saints and Sinners.

“Having a whole album of new songs really invigorates the live show for us and makes it exciting all over again,” Roberts said of 9. “It’s like a shot in the arm every time we go through this process.”

Also at SLO Brew this week, on Saturday, Dec. 6, comes the return of “How the Grouch Stole Xmas” with Grouch and Eligh (of Living Legends) (7 p.m.; all ages; $20 presale or $23 at the door). Hip-hop trio CunninLynguists and DJ Abilities will open the show. 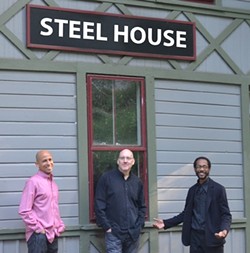 Simon hails from Venezuela and has played and recorded with The SF Jazz Collective and Bobby Hutcherson as well as leading his own combos. He’s also a 2010 Guggenheim Fellow—the big showoff!

Colley’s played with Herbie Hancock, Jim Hall, and Michael Brecker and collaborated on more than 200 recordings.

Blade, a long-time drummer with The Wayne Shorter Quartet, has also recorded with Joni Mitchell, Joshua Redman, and Bob Dylan. Clearly, these guys are no slouches!

This is one of only five West Coast appearances for the band, so don’t miss it! 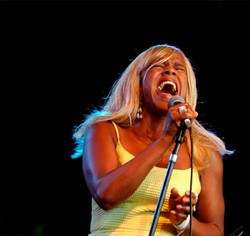 Fronted by Roach, a potent singer in the vein of Tina Turner, the band is a wonder to behold—sexy, energized, and nostalgic. With Roach’s husband Byl Carruthers on guitar, Bobby Pickett on bass, Harry Cohen on keyboards, and Don Swanson on drums, this is a tight unit delivering great interpretations of blues classics such as “Born Under a Bad Sign” and “Killin’ Floor” as well as originals.

They formed in 1995 and quickly became a premier band on the L.A. blues scene. “A trip to Buddy Guy’s Legends in Chicago launched an international career that includes tours of Europe, major U.S. blues festivals, and the Pacific Legendary Rhythm and Blues Cruise,” according to their bio. They also have four CDs: Black and White (1998), Blues and All the Rest (2001), Very Live (2005), and their most recent, American Music (2012),  which is available from their website (caferandb.com).

Morro Bay’s own energetic quintet, Back Bay Betty, will open the show.

Tis the season at Cal Poly

As fall quarter draws to a close, many of Cal Poly’s talented student ensembles prepare to showcase their skills one last time before the New Year begins.

The Cal Poly University Jazz Bands will present their annual Fall Jazz Concert at 8 p.m. Friday, Dec. 5, in the Spanos Theatre. Tickets are $12 for the public and $9 for senior citizens, students, and Jazz

The Cal Poly Choirs present “A Christmas Celebration” at 8 p.m. Saturday, Dec. 6, in Harman Hall of the Performing Arts Center’s Christopher Cohan Center. Tickets are $12 and $14 for the public and $9 and $12 for senior citizens and students.

Cal Poly’s a cappella group Take It SLO presents its annual Holiday Concert at 1 and 7 p.m. on Sunday, Dec. 7, in Room 218 in the Davidson Music Center (Building 45) on campus. Admission is $7 at the door for the public and $5 for students.

The Cal Poly Symphony, soprano Ciera Lamborn, and tenor Christopher Campbell will perform what is considered to be some of the greatest opera music ever written at its Fall Concert at 3 p.m. on Sunday, Dec. 7, in Harman Hall in the Performing Arts Center’s Christopher Cohan Center. Tickets are $12 and $14 for the public and $9 and $12 for senior citizens and students. Call 756-4849 for tickets to all Cal Poly shows.

The SLO Wind Orchestra wants to get you in the holiday spirit this Sunday, Dec. 7, at the Cuesta College Cultural and Performing Arts Center for Mozart’s “Ave Verum Corpus” and John Williams’ “Sound the Bells!” Plus, the audience will be invited to join in on a few sing-a-longs in this afternoon filled with peace, hope, and joy (3 p.m.; all ages; $20 adult or $10 for students; kids 8 and under are free).

Local hula group Hoapili Pomaika’i Aloha hosts a concert by traditional Hawaiian group Hu’ewa this Sunday, Dec. 7, at the SLO Grange Hall (7 p.m.; $22; all ages). The name, Hu’ewa, means, “to sing or create on our own path.” The members of the group include Kekoa Kane, Kahi Young, and Kupu Dalire-Na`auao. Get your Hawaiian Christmas on!