Elliot Randall & The Deadmen sound like they’ve been rolled in the dust of Abilene, bounced around the bed of a rusted Ford pickup, and dropped off at a lonesome crossroads to wait for the devil.

The San Francisco quartet is currently touring in support of Caffeine & Gasoline, its sophomore effort, which is filled with enough twang and vocal harmonies to keep country fans satisfied, and enough grit and outlaw spirit to attract alt-rock fans as well. Though the album was just released on Feb. 5, it’s already been reported as the top five most added at Americana radio in its debut week.

Not surprising when you consider Randall’s 2007 debut, Take the Fall, which was quickly added into rotation at XM Radio’s “X Country,” where it remained for 13 weeks and reached #16 on their charts.

“Caffeine & Gasoline was an easy album to make and at the same time the album I’ve always wanted to make,” said Randall. “Nearly everything on it was recorded live, straight to tape, with all the guys playing as a band. I hope this album proves that you can be a singer/songwriter and still get a groove going. I wanted this album to show that it’s okay to rock a little bit. And having a kick ass band helps too.”

Check out Elliot Randall & The Deadmen on Sunday, Feb. 21 at Frog and Peach.

Don’t forget that this Friday, Feb. 19, will be your last chance to catch Still Time before they embark on their four-month, national tour. Kapakahi and Central Currency will open (7:30 p.m.; all ages; $10 presale or $12 at the door). 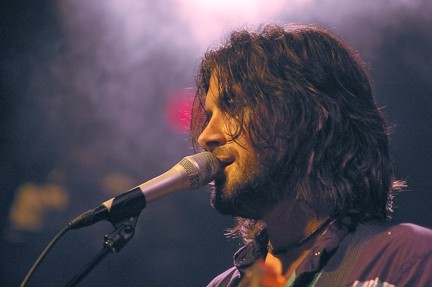 The always-popular Bob Schneider returns to the club on Saturday. Feb. 20 (7:30 p.m.; all ages; $14 presale or $16 at the door). As his bio says, “Bob Schneider is not new to this game. He has built his career as a working class musician and as a result has an institution of faithful followers all across the country with a mega-fan-base epicenter in Austin.” Dallas duo Smile Smile, which blends “hauntingly beautiful vocal lines with a modern folk sound,” will open the show.

Bouncing Souls is known for its high energy, but now you can see Souls member Greg Attonito in an acoustic garage blues setting when he plays Monday, Feb. 22 (8 p.m.; all ages; $8 presale or $10 at the door) with opening act Kevin Seconds. “Hey all! My name is Greg and I came into this world in 1970. I have been making music with a band called the Bouncing Souls for most of my life. For the past few years, I have been experimenting with recording.” Come hear the results!

Briertone, featuring Adam Pasion, plays this Tuesday, Feb. 23 (7 p.m.; all ages; $6 presale or $8 at the door). The Honey Trees open. “We wanted to let you know that the new album is finally complete and is now being pressed,” wrote Pasion on his myspace page. “As you know, the record has taken far longer than any of us ever expected. It’s been quite a battle along the way, as if all odds were against us. I thought that when it was finished I would have a sense of relief or accomplishment, but I still found myself uneasy when we got there. This record is not for my accomplishment, or our accomplishment; it’s for you. If this album could speak some love, and hope, and truth into your lives … then its purpose is being fulfilled.”
On Wednesday and Thursday, Feb. 24 and 25, The Expendables with opening act Iration brings reggae, punk, and metal to the Brew (6 p.m.; all ages; $20). The Santa Cruz-based Expendables grew up in the surf, skate, and party scene—the exact sensibilities they bring to their live shows. Go big or go home.

Mardi Gras was last Tuesday, but this weekend the good times continue to roll at the SLO Blues Society’s concert this Saturday, Feb. 20 at the SLO Vets Hall.

This time around hear the swamp boogie of Rosie Ledet & the Zydeco Playboys, with Lenny Blue and the Otter Guys opening the show (8 p.m.; 21-and-older; $20 at the door; $17 for Blues Society members).

If you like Clifton Chenier and Queen Ida, you’re gonna love Rosie Ledet (aka—the Zydeco Sweetheart), whose sultry voice and saucy accordion has won her fans far and wide. Since 1994, she’s recorded eight albums with over 90 original compositions and has performed at blues, zydeco, and heritage music festivals throughout the United States, Canada, and Europe.

A real Louisiana native, Ledet was born in a rural part of the state in 1971 and taught herself to play her husband’s accordion by playing along with the recordings of Boozoo Chavis and John Delafose. She sings and writes in both Creole French and English, and is famed for double entendres.

“I try to give [the songs] a woman’s voice—they seldom get one in this kind of music,” she said, calling zydeco “sped up blues.”

Solo acoustic artist Janet Robin plays The Porch in Santa Margarita next Thursday, Feb. 25 at 7:30 p.m. This is the woman Micelle Shocked called “One of the best guitarists in the world, male or female.”

She’s touring in support of her new album Everything Has Changed, for which she teamed up with producer John Carter Cash (son of Johnny and June) at Cash Cabin Studios outside of Nashville. Built by Johnny in 1979, this studio is where the country legend recorded much of his later work including his final recording, American V: A Hundred Highways, which was released posthumously and co-produced by Rick Rubin and John Carter.

“We have talked at great length about this project and he understands my desire and vision to record an album that is representative of my live performances,” said Robin of Carter Cash. “In John, I have finally found a producer who understands what I am striving to achieve in the studio.”

Inexplicably, this show is free! 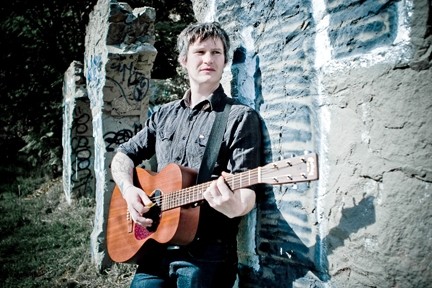 Devil Makes Three frontman Pete Bernhard has a new solo album out, Straight Line, and to promote it he’ll play a special in-store at Boo Boo Records this Friday, Feb. 19 at 5:30 p.m. Featuring the same jumping, old time music as Devil Makes Three but in a stripped down, rawer form, the new album highlights Bernhard’s irresistible melodies and clever lyrics. Since he’s spend most of 2009 on the road with his band, he’s in top form. You’re never going to get a closer, more intimate look at Bernhard than during this free in-store show.

You must have liked him the first time, because due to popular demand, San Francisco’s Mark Growden is returning to the Steynberg Gallery this Friday, Feb. 19 (7:30 p.m.; $10 at the door). Growden has composed original musical scores for a number of dance and theater companies including Joe Goode Performance Group, The Crucible’s Fire Oddyssey, and Alonzo King’s Lines Contemporary Ballet, with whom he won the Isadora Duncan Award for Best Original Score for a New Dance Piece. His dark, brooding, theatrical music has won him fans worldwide. Local otherworldly performer Timo Beckwith will open the show with an improvisational musical journey performed solo on hand percussion, recorder, shruti box, Ugandan Ennanga, and Gourd Ennanga—all while mixing in his unique trance vocals.

Argentinean vocalist Sofia Rei Koutsovitis performs at the Steynberg Gallery on Saturday, Feb. 20 at 7:30 p.m. Phil Lutz of the New York Times gushes, “…the passion and clarity with which she assayed a tricky mix of South American rhythms and jazz-inflected harmonies made clear why she has been embraced by New York City audiences from Carnegie Hall to the hippest downtown haunts.” Check her out.

The Cal Poly jazz ensembles will bring their “young, fresh” approach to one of America’s great art forms—jazz—at 8 p.m., Saturday, Feb. 20 in Harman Hall at the Performing Arts Center. See two big bands and two combos as they reinvigorate the genre. Tickets are $12 and $15 for the general public, $10 and $13 for seniors and Jazz Fed members, and $6 and $10 for students (756-2787).

Functus—a power trio made up of guitarist Jacob Odell, bassist Dylan Johnson, and Santa Barbara super drummer Steve Campbell—brings its funk message to Sweet Springs Saloon this Saturday, Feb 20 at 9:30 p.m. Booties will shake, hips will sway, and you’ll probably hook-up with a hottie, because Functus’ sound is the soundtrack to sex, people.

World music and experimental act Wahid plays Monday, Feb. 22 at 8 p.m. in the Steynberg Gallery. According to press materials, “The adventure of creating new musical expression is what brings these two artists together as Wahid. Wahid is Dimitris Mahlis on oud and other string instruments and Chris Wabich on tuned bass frame drums and percussion. Wahid strives for excellence balancing compositional depth with improvisational freedom.” The cost is $10 at the door.

There’s nothing like a little wine, jazz, and bossa nova to make your mid-week a bit more palatable, so plan on heading to The Lido at Dolphin Bay this Tuesday, Feb. 23 to see and hear Toty Viola and enjoy Grgich Hills wines. Toty is an Italian-born jazz artist and composer who recently located to the Central Coast area and completed a new recording, Jazzissimo! The tasting and music run from 5:30 to 6:30 p.m. 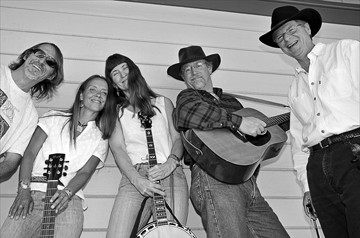 The Appellation Bluegrass Band is having a CD release party at the SLO Down Pub this Wednesday, Feb. 24 at 7 p.m. Expect some pickin’, some grinnin’, and some awesome bluegrass tunes. The show is free.

I hope you don’t plan to go to the Colbie Caillat concert next Thursday, Feb. 25 at the Clark Center, because that baby is sold out! Maybe it was because she just won a 2010 Grammy Award for “Best Pop Collaboration with Vocals” for “Lucky” with Jason Mraz. Next time get your tickets early!

Don’t fret, because instead you can catch Crosby Tyler when he plays the Steynberg Gallery on Thursday, Feb. 25 at 7:30 p.m. The singer-songwriter has toured with Peter Case and is featured on the album 10 Songs of America Today, which has resided in the top 25 of the Euro-Americana chart since its release.

An investigation as much as a celebration of Southern folk music and its African roots, the Carolina Chocolate Drops do some “traditional innovation” to the pre-War World II styles of Appalachian country music, Piedmont blues finger-picking, and historical-tainted minstrel songs. Originally huddling together under the music direction of Joe Thompson, an 86-year-old black fiddler from their native North Carolina, the trio has stepped into its own, marvelously blending and reinvigorating an assortment of blues, ballads, ragtime, and numerous lively jigs that demand to be foot-stomped. Opening with a fiddle and banjo working of Etta Baker’s “Peace Behind The Bridge,” they burn through an up tempo take of the traditional “Trouble In Your Mind,” followed with the kazoo-infused, vaudevillian rag “Your Baby Ain’t Sweet Like Mine.” And just to pull their string and jug band into the modern era, they refashion Blu Cantrell’s “Hit ‘Em Up Style” into a hillbilly barnburner, and end their major-label debut with a minstrel take on Tom Wait’s “Trampled Rose.”

Often tagged with the moniker the “godfather of rap,” Gil Scott-Heron rhymes mixed street poetry with an articulate tongue that picked apart the deterioration of the inner city (“Winter In America”), political awareness (“The Revolution Will Not Be Televised”), and worldwide injustices (“Johannesburg”). But the times turned on Mr. Scott-Heron. His life collapsed under the weight of drug dependency, followed by arrests and prison. His voice is weathered and huskier now, but they match his sentiments perfectly. Arcing from the humble opening dedication to his grandmotherly maternal figure to the candid self-exploration of the album-titled track, I’m New Here feels like a life under focus. The mood is often bleakly noir. “Running” is atmospheric with subtle, minimal, muffled beats, and he updates Robert Johnson’s “Me And The Devil” with menacing tones and sharp hip-hop drum snares. But tenderheartedness of “I’ll Take Care Of You,” with piano and string backdrop, recalls the soul jazz of his early days, and you realize that Gil Scott-Heron is still relevant, as a man putting his life words in your ear.