Death on the Nile is old-fashioned but fun

DEATH ON THE NILE

Kenneth Branagh (Belfast, Murder on the Orient Express) directs himself as novelist Agatha Christie's famed Belgian detective, Hercule Poirot. During a river vacation on the Nile, Poirot must investigate the murder of a young heiress. (127 min.) 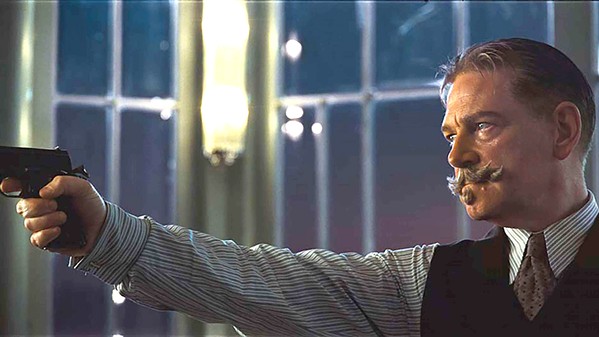 Glen Branagh is a slick director, and here he begins with Poirot's mustache origin story. It's 1914, and Poirot is on the front lines in an ugly trench warfare campaign. His commanding officer, who sports a massive mustache, reluctantly orders his men to charge a bridge, knowing mass casualties will result, but since the officer is simply carrying out orders from above, there's no choice. It's certain death for all until Poirot, a clean shaven Branagh made young through computer generation, comes up with a sneak attack plan. I won't spoil the fun, but suffice it to say, his genius shows itself early. Now, flash forward to 1937, where the massively mustachioed Poirot enters a jazz club and sees blues singer Salome Otterbourne (Sophie Okonedo) perform. He can't help but notice Jacqueline "Jackie" de Bellefort (Emma Mackey) dirty dancing with her fiancé, Sam Doyle (Armie Hammer). The two are clearly in love ... until Jackie's heiress friend Linnet Ridgeway (Gal Gadot) arrives and quickly becomes smitten by Sam, setting up a rift between her and her longtime friend, Jackie, and setting the stage for the murderous mystery afoot. It's a well-made film, shot on an English sound stage and on location in Morocco, so Egypt's monuments are but ones and zeros in a computer, but it's still fun to look at. My two complaints are that it's too easy to guess the killer, and the middle of the film drags a bit, but its many love themes are well timed for Valentine's Day.

Anna Don't be surprised if you guess the mystery murderer and the circumstances around the crime pretty early on. Usually, I'd say not having a little more twist to the tale is a letdown, but this movie is fun to look at, and I didn't mind knowing what was up even before Monsieur Poirot. The costuming is on point, the settings are stunning, and there's a cast of characters all devious and cunning in their own regards. The wedding party is a mashup of family, old friends, even an ex-boyfriend named Windlesham played by Russell Brand. Poirot's old friend Bouc (Tom Bateman) is there with his mother, Euphemia (Annette Bening), as well as Linnet's aunt, Marie Van Schuyler (Jennifer Saunders), and her nursemaid, Mrs. Bowers (Dawn French); Linnet's servant, Louise (Rose Leslie); Salome and Rosalie (Letitia Wright); and cousin Andrew (Ali Fazal). While the group may all seem like they have good intentions to celebrate the happy couple, Linnet soon reveals to Poirot that she doesn't trust any of them besides her new husband. Jackie is full-on stalking them, maybe even trying to kill them. While Linnet is rich enough to buy any material goods she wants, she cannot buy a sense of security. The film does trudge along a little bit in the middle, but it's all in hopes of creating suspense around the mystery that keeps unfolding. This one's fun to see on the big screen.

Glen The cast is exceptional, though Hammer's recent charges of sexual misconduct do hang over the film a bit. Okonedo is especially good as the wise and soulful blues singer who just might be enough to spark some life in the long-celibate Poirot. It's a very old-fashioned kind of film, and Branagh seems uninterested in trying to spice it up for a contemporary audience. If you like a classic, old-school murder mystery filled with exotic locales, a great soundtrack, and a terrific cast of characters, this will more than do. It's also got a hopeful, romantic ending that brings the flashback young-Poirot beginning full circle. Aside from my brief mid-film nap, I thoroughly enjoyed it.

Anna I definitely would have been much happier seeing someone else in Hammer's role, but it seems this movie was in the can long before the allegations came out. It was originally slated for release in December 2019, was pushed due to COVID-19 several times, and is just now getting to theaters. Needless to say, I don't see any upcoming work on his IMDB, so I don't think we'll be seeing him on screen again any time soon. Good riddance! Despite that unfortunate casting, this film really is a slick looking piece of work, and I found the whodunit adventure pretty entertaining. If you want something pleasing to look at, entertaining, and not too personal or emotional, Death on the Nile will totally satisfy. Δ