Debbie Arnold, Ellen Beraud square off in fight for SLO County Board of Supervisors' swing seat

While candidates still have three months to jump into the 2020 election races, a battle for San Luis Obispo County's 5th District supervisor is underway.

Debbie Arnold, a Pozo rancher and two-term incumbent, is defending her seat against challenger Ellen Beraud, a former Atascadero City Council member, who entered the race in March.

"I just saw where the county was going," Beraud told New Times, "and I was thinking to myself, we need better representation."

Arnold, on the other hand, said she's proud of her record and wants to continue her leadership on challenges facing the county, like the closure of Diablo Canyon Power Plant and managing groundwater.

"I enjoy being a supervisor, knowing that I can really make a difference," Arnold said. "I think things have been going really well the last few years, even with some pretty big challenges."

Arnold and Beraud are vying to represent the communities of Atascadero, Creston, Garden Farms, Santa Margarita, Cal Valley, and portions of Templeton, SLO, and Cal Poly.

District 5 is one of three in the county that are up for grabs next year—along with District 3 and District 1. Adam Hill (District 3) and John Peschong (District 1), who are running for re-election unchallenged as of press time.

Politically, District 5 is the most evenly split district between Democrats and Republicans in the county, which sets it up to be the race that determines the swing vote on the Board of Supervisors. The board is currently controlled by a conservative majority of Arnold, Peschong, and Lynn Compton (4th District), who was narrowly re-elected in 2018.

As of June 30, eight months before the primary, the candidates had received nearly $250,000 in total contributions, with Arnold leading the fundraising at about $140,000. Arnold has more support from industries like wineries and builders, while Beraud has received more individual donations.

Arnold and Beraud hold contrasting positions on many of the hot-button issues at the county. 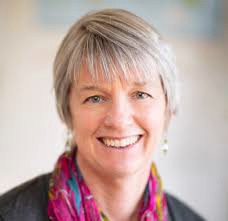 Beraud believes the county has overly restricted the incoming cannabis industry, while Arnold wants to tighten regulations on it. Beraud wants the county to explore joining Monterey Bay Community Power, a community choice energy (CCE), while Arnold is skeptical. Beraud opposed a controversial quarry project in Santa Margarita that the county ultimately denied, while Arnold voted for it.

On cannabis, Beraud said that with Diablo Canyon closing, the county can't afford to turn new economic opportunities away.

"We have to think about what's the best for our economy in terms of being diverse," Beraud said. "I don't think the cannabis rollout has been very smooth in this county."

Arnold said her goal with cannabis policy was to allow existing growers a chance to continue post-legalization. But as that rolled out, opposition emerged in rural communities. Now, Arnold is in favor of buffering cannabis farther away from neighbors.

"My job is to work to make sure the uses are compatible and to try to reduce conflict," she said.

Despite most jurisdictions in SLO County voting to join Monterey Bay Community Power in the next two years, Arnold remains wary of this "big expansion of government," as she called it. Arnold said she's not flat-out against CCE, which buys and sells electricity while leaving distribution to PG&E, but she wants to spend more time thinking about it for the county.

"We're taking a big step that I don't believe there's any going back from," she said.

Beraud supports participating in CCE as a means to pursue clean energy and save ratepayers money.

Discussing controversial "yes" votes on projects like the Santa Margarita quarry in 2015 and the Phillips 66 Rail Spur Extension in 2017, Arnold said she believed both were in the best interest of the economy, and would have been compatible with the communities.

On the quarry project—which has since been revived and whose application is currently on hold at the county—Arnold said, "I personally do not think the impact on the neighbors would have been that great, and I say that including myself. I come into work on Highway 58, and often drop my grandchildren at the Santa Margarita school. There are already trucks in and out of the town. ... I really believe that it was a compatible use."

Beyond the specific issues they'll tackle as supervisors, Arnold and Beraud spoke to their leadership styles and political philosophies. Arnold's overarching lens is one about "smaller, more efficient government," she said.

"I absolutely believe government plays a role in our life and an important one. On the other hand, too much government can impede opportunities for people," Arnold said.

Beraud, who served on the Atascadero City Council from 2006 to 2010, said she emphasizes listening and inclusivity in her representation. She argued that Arnold's record shows a lack of forward thinking and preparedness, and reputation of not listening. She feels the ideological division on the Board of Supervisors has created a level of polarization that has discouraged citizen participation.

"There's not a lot of discussion. It's just like they count the votes before they even get there, it seems like," Beraud said. "I want people to be involved in their government." Δ