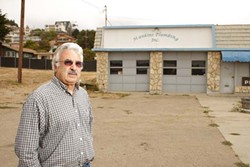 Developer Franco DeCicco has his sights set on a vacant gas station lot in Cayucos, but he’s straddling two lawsuits: one brought against his proposed motel/condo project and one he’s brought against the California Coastal Commission. Whether he wins or loses the lawsuit he initiated, DeCicco could be looking at bad news.

DeCicco proposed a mixed-use project in Cayucos last year to build four residential units and an 18-unit motel. SLO County supervisors approved his project on appeal on Oct. 28, but with a split 3-2 vote. A number of Cayucos residents, falling together as Concerned Citizens of Cayucos, fought the project because they said it was too big and out of character with the small community.

The group sued the county over the DeCicco project in November 2008. In their lawsuit, the concerned citizens argued that the project should have been subjected to a broader environmental review—specifically an environmental impact report—but that lawsuit is now on hold because
of DeCicco’s lawsuit against the Coastal Commission.

As for DeCicco’s suit: When county officials approved the project, they did so on the grounds that it complied with the local coastal plan. To get technical: Jurisdiction over development in coastal zones is divided between local governments and the Coastal Commission. Local governments spell out specific uses allowed under local coastal plans, and those uses, when approved by a county, can’t be appealed to the Coastal Commission.

DeCicco received such approval, but the Coastal Commission argued the project was a subdivision and, as such, not a specified use in the local coastal plan.

In other words, anyone should be allowed to appeal the project to the Coastal Commission. The commission ruled it had appeal jurisdiction in August. DeCicco filed his suit on Oct. 9. The concerned citizens filed an appeal on Oct. 12.

The Pacific Legal Foundation, a property rights group based in Sacramento, is representing DeCicco in his suit against the commission. According to attorney Paul Beard, the Coastal Commission cherry-picked environmental laws to assert jurisdiction
over the project.

“The commission has come up with a very clever argument that could have ramifications up and down the coast,” Beard said.

Those impacts could include a precedent allowing the Coastal Commission to assert more appeal authority over local governments, he explained.

If DeCicco wins his case and the commission can’t hear the concerned citizens’ appeal, the decision would jumpstart the Concerned Citizens of Cayucos lawsuit, which is currently on hold.

“What it all boils down to is that it’s out of scale with our neighborhood—it’s incompatible,” said concerned citizen Bruce Paine. “And I can’t emphasize enough that we’re not against the development of that property.”

But if DeCicco loses his case, the concerned citizens’ appeal would keep rolling forward.

“So to me, it indicates that DeCicco is obviously worried that this project won’t stand scrutiny by the Coastal Commission,” said attorney John Belsher, who’s representing the group, “and I view it as somewhat of a desperate attack.”