The Environmental Protection Agency (EPA) will make a final decision this fall on a 3-year-old request to exempt an Arroyo Grande aquifer from drinking water protections, agency officials told locals at a recent town hall meeting in the SLO Vets’ Hall. 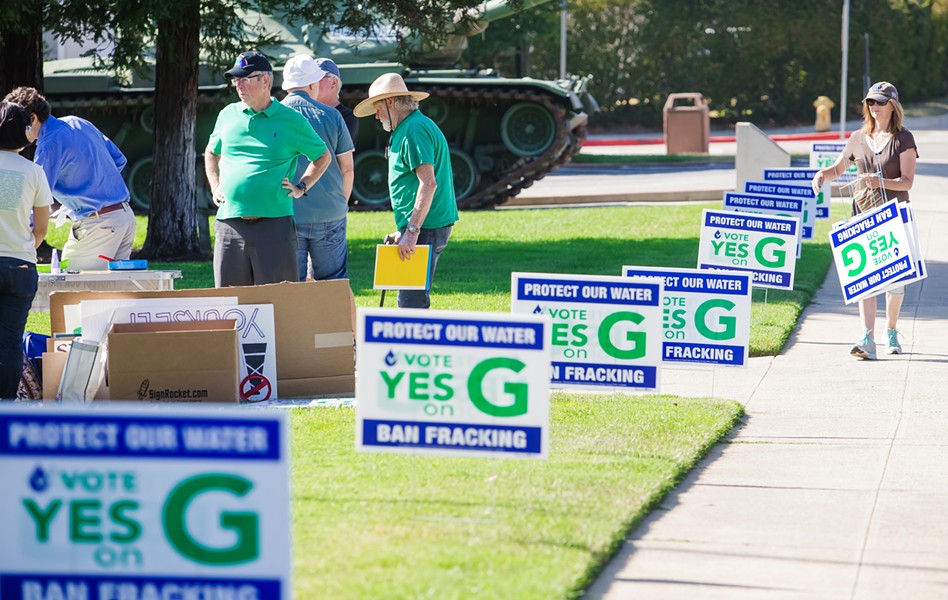 SLO County residents, environmental activists, and oil industry members packed the Vets’ Hall on Aug. 23 to hear an update from the EPA—arranged by U.S. Rep. Salud Carbajal (D-Santa Barbara)—on the status of Sentinel Peak Resources’ application to expand the area in which it injects oil wastewater. Approval would clear the regulatory path for the firm to move forward on a planned expansion of the Price Canyon Oilfield in Arroyo Grande.

But the EPA isn’t the only obstacle standing in Sentinel Peak’s way. County residents will also vote on Measure G in November, which, if passed, would place a moratorium on new oil drilling and fracking. Supporters of Measure G (and opponents of the aquifer exemption) held a rally outside the hall before the meeting, holding signs that read, “Yes on G,” “Protect People Not Polluters,” and “Water = Life.”

“That’s our future source of drinking water and we must protect it,” one speaker at the rally said.

Countering those attendees stood people in support of the oilfield and the aquifer exemption, wearing shirts that said “I love SLO jobs.”

At the town hall, EPA officials explained the timeline of the aquifer exemption application, which was originally filed by the oilfield’s previous operator in 2015, later approved by the state, and currently under review by the EPA. Officials emphasized the criteria for their decision—whether the aquifer is a current, or a possible future, source of drinking water. The agency will not consider outside environmental factors like seismic activity or climate change in their decision, officials said.

Advocates from both local camps then got a chance to ask the EPA reps questions. The responses were by and large terse and by the book—which is about what Natalie Risner, a resident within 2,000 feet of the oilfield, expected.

“I didn’t expect to get any answers, really,” Risner told New Times. “I appreciated our congressman asking them to come. We’re concerned, we’re people, and we’re living there. Don’t just write us off. I feel like we’re owed that.” ∆