Tom Wright has old ears. And yet his hearing is crystal clear. In the crowded, noisy coffee bar where his work hangs, the artist seems to have no problem understanding me. His good hearing, he says, is almost uncanny. The guy can hear two teenagers closing a drug deal around the corner, a horn solo in a piece of music several houses away. 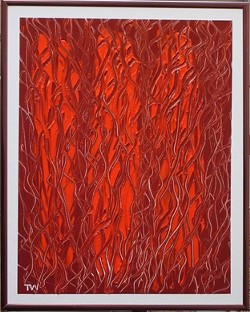 “I should have been a conductor,” he reflects, jokingly.

Wright has old eyes, too, though these have a more complicated history. For decades, he says, he saw in shades of brown and yellow and beige, until 15 years ago, when he underwent surgery to remove cataracts. At home after the operation, he made a startling discovery.

“I realized that for years I had been seeing the world in sepia,” he says. Reliving the moment, his expression is rapturous. “It takes a while to get your focus back, and I had a huge collection of old LPs, albums lined up by different colors, and suddenly I’m seeing the ends of the spectrum, almost shimmering there. And it comes into focus … I’m seeing things like a once-blind man.”

Once this sudden shock of color had sunk in, Wright took up painting, eager to explore the two qualities he’d sorely missed: color and texture. But when traditional brushes weren’t cutting it in the latter department, Wright found an implement that, quite literally, would: a small, triangular-shaped Italian painting knife.

For several years, the artist created Impressionistic sea-, land-, and snow-scapes, relishing the rugged, tactile qualities his knife produced. Though his paintings have a fresh, spontaneous feel, Wright’s process, he insists, is in fact quite structured. The colors that so boldly dance across the canvas—Winsor and Newton oils, exclusively—are first carefully selected and lined up in order of when they’ll be employed. The steps in creating a painting are documented, so that the final work, if the artist so desires, can be replicated.

A few years ago, Wright says, he began moving away from representation when, eyeing a finished landscape painting, he found himself more interested in the tangled blur of foliage on a hillside than in the scene as a whole. Indeed, more recent works like Saffron, with its tiny waves of red, purple, and yellow, and Early Spring Greenery, a busy crisscross of green blades, look like what you’d see if you stared with a soft gaze at one particular piece of earth.

These, days, Wright describes his work as being “on the cusp of going abstract.” I liken several of the pieces in his current show to the work of Pollock, though the artist cites Monet and Van Gogh as more prominent influences.

However, Wright charmingly concedes, “You never know what influences you pick up. It’s like lint, you know?”

The influence of Canadian abstract painter Jean-Paul Riopelle is referenced in Homage to Riopelle, a painting filled with intertwining reds, yellows, and blues—the same three colors as in Riopelle’s Knight Watch, a piece Wright has long admired.

Monarch Butterfly Infestation, the one that first called to mind Pollock’s action paintings, was inspired by the living quality of a eucalyptus tree covered with hundreds of fluttering wings.

Other works—perhaps because I know they were created with a knife, and thus envision their strokes as scars—seem to have a certain visceral, gutlike thing about them, as if they were carved from living flesh. Blood Thicket, as its title suggests, evokes a forest of red veins. Its wavy lines suggest movement, and I almost expect to see the piece pulsating rhythmically, like a freshly eviscerated heart. (Wright, it turns out, was actually thinking of undergrowth about to be consumed by flames.)

In a similar vein is Conflagration. The artist had in mind the World War II bombing of Dresden, imagining how the burning city would have looked from above—a spectacularly horrifying vision of reds and oranges, interspersed by a charred purply black.

One advantage to painting with knives, it appears, is that in a painting with many layers, an artist can bring underlying colors to the surface, or cut through one layer to reveal another.

I notice how, in each painting, no matter how spontaneous—even messy—it appears, Wright leaves a pristine, unspoiled border of canvas around the edges, so that the painting seems to take up slightly less space than the surface on which it was painted. He does this, he says, to emphasize art’s illusory nature, its dependence, perhaps, upon the viewer’s ability to be deceived, to see a complete work of art in the unique assembly of many pieces of non-art.

Wright was an English professor at CSU Northridge for nearly 30 years, and moved to Cayucos with his wife, a fellow artist and former professor, upon retirement. He didn’t take up painting until the late ’90s, though art and artists had long been a part of his life. Listening to Wright describe his upbringing, I begin to get to idea that, growing up in New York in the ’40s, many of the great artists of the 20th century must have felt very nearly within one’s reach. Wright’s high school art teacher had been a student of the abstract expressionist painter Wasily Kandinsky. At 16, one of his assignments as feature editor for the school paper was to interview Ingrid Bergman—who, Wright recalls, appeared fresh from the theater, still in costume as Joan of Arc.

“She’d taken off her armor,” he says, “but she still had on her chainemaille and her hair. We were there with our little notebooks and our little canned questions, and of course she came in and she put us completely at ease. We were flattered to death, you know. … She knew all the time how to create this illusion. I didn’t realize until many years later how we had been had!”

I might also mention that Wright has a pronounced penchant for conversational wandering. It’s not that he gets off-topic, it’s that he seems to view everything as more or less equally on-topic. But not all who wander are lost, and Wright, as he goes on, reveals a uniquely professorial talent for taking an unrelated anecdote and transforming it into the final puzzle piece of the entire conversation.

“Being an actor depends almost 75 percent on the whole appetite of human beings to be entertained, to be moved,” he continues. “They want to be taken for a ride. They want to get out of their humdrum lives, you see. And so the whole thing about art is a fiction.”