Paso Robles is known for big wine, especially fruit-forward, voluptuous cabs and zins—the kind that come with both a high alcohol and sugar content and the promise of purple teeth.

The region’s darling wine industry is also now lauded for being a serious economic engine, the prime driver for transforming a place once known as a small cow town into a hot destination that touts some of the area’s best restaurants and all other things hospitality.

Since the industry took root in the mid 1970s, Paso has almost quadrupled in size, and projections estimate another 12,000 residents will settle in by 2045. Tiny Templeton has grown as well, and down south, Edna Valley has filled in with vineyards. To state the obvious, wine is big in SLO County.

“I think most people understand intuitively that the various pieces of the wine industry are an important part of the local economy,” said Jason Haas, chair of the Paso Robles Wine Country Alliance’s (PRWCA) board of directors, and partner and general manager of their family-owned Tablas Creek Vineyard.

But just how much does it contribute? 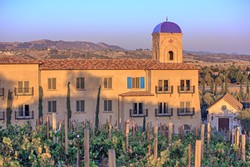 The wine industry’s economic impact was recently measured in a study commissioned by the PRWCA. The financial and employment impacts are laid out in an exhaustive, technical report by UC Davis professors William Matthews, a project scientist at the UC Agricultural Issues Center, and Josué Medellín-Azuara, a project scientist at the UC Davis Center for Watershed Sciences. Jennifer Porter, PRWCA executive director, said they decided to use the Davis researchers in order to get thorough, honest, and unbiased data.

The study measured impacts of the industry both countywide and specific to the Paso Robles American Viticultural Area (AVA), which encompasses most of North County. While the Wine Country Alliance is Paso-specific, they wanted to include the entire county in order to get a more complete picture of the industry’s impacts and to see what role the Paso Robles AVA plays in that picture. The study found that 87 percent of those impacts came from Paso, which Haas said is reflective of the amount of vineyard acreage there.

According to Matthews, the industry’s potent economic impacts come from ripple effects into several sectors of the local economy. Those are created by wine’s value-added character, in which wine grapes are turned into wine and then sold and marketed, creating additional value every step of the way.

To get data for the study, Matthews and the PRWCA asked growers and wineries to fill out an exhaustive survey about their operations. They calibrated an economic model used for similar studies and checked the data to eliminate any duplicated numbers—such as making sure that seasonal or migrant workers, who often work at several vineyards, weren’t counted more than twice when assessing the number of jobs created by the industry.

The report measured direct impacts—money spent on grapes and wine and the jobs they create—as well as indirect impacts—revenue and jobs associated with buying products to make wine (barrels, corks, bottles, and their transportation), and tourism.

The report estimated that 67 percent of all winery visits came from people who live outside the county and that 28 percent of all hotel stays in SLO County are created by the industry.

Haas said that number in particular was a surprising indicator of how deep the impacts went countywide.

“It’s a big piece up in Paso, but I wasn’t sure of the extent that it moved the needle across the whole county,” he said.

Matthews said that coming up with these numbers was a challenging feat, in part because there aren’t a lot of industries that can be compared to wine’s unique nature.

“This is one of the really hard parts of trying to estimate the economic impact from the wine industry,” he said. “Unlike any other agricultural commodities, there’s really nothing like wine in its attraction from tourists. You don’t get a bunch of people trying to go out and visit almond orchards.”

The report found that the industry created 13,627 total jobs in 2015, 11.5 percent of all jobs in the county. The industry directly generated 6,352 of those jobs, while the remainder were generated by other industries that support vineyards, winemaking, and wine-related tourism. The report counted each job equally, whether they were part-time, seasonal, full-time, or an owner. 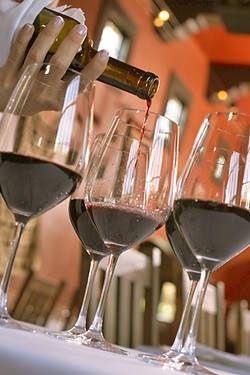 The report also determined that the industry makes up 6.5 percent of the county’s total gross regional product.

On the back end, the industry brings significant benefits to state and county coffers, with an estimated $44.8 million in property taxes from vineyards and wineries in 2015, 28 percent of all property tax collected. Ten percent of all sales tax generated in the county was from wine sales, and the industry was responsible for an estimated $19.9 million in personal income tax paid to the state in 2015.

All statistics in the study showed a steady increase from 2014. That, Porter noted, also takes into account the not-so-great harvest of 2015, primarily brought by late-spring frosts that swept through the region and killed buds that would have otherwise ended up as grape clusters.

The industry’s growth and economic benefits don’t come absent of controversy, however. Within the Paso Robles AVA, there are two very contentious issues currently being hashed out by the county. Well levels above the sprawling Paso Robles Groundwater Basin—where vineyard dominated agriculture uses 67 percent of the groundwater—have seen sharp declines in recent years, with some of that attributed to the increasing acreage of irrigated wine grapes. Over on the west side, the Adelaida area has become a hub for special events largely hosted at wineries, and neighbors are furious over their impacts, especially those pertaining to traffic and noise.

Haas recognizes that these impacts are a difficult issue, but he’s also hopeful that the community-based spirit in the area will help those problems be alleviated.

“Any time you see growth in any industry, there has to be a dialogue between the industry that’s growing and the community that they’re a part of,” he said. “I think that overall, the local community has been incredibly supportive of the wine industry, and I think that the wine industry has really brought some wonderful improvements to the quality of life in the area, particularly in the North County. And I have full confidence that we’ll work these growing pains out.”