Created by writer Mark Bomback (Live Free or Die Hard, The Wolverine, The Art of Racing in the Rain) based on William Landay's 2012 novel of the same name, the story revolves around Assistant District Attorney Andy Barber (Chris Evans); his wife, Laurie (Michelle Dockery); and their 14-year-old son, Jacob (Jaeden Martell), who is accused of murdering a classmate. Their world now torn upside down, Andy and Laurie believe their son is innocent, but as evidence mounts and the plot thickens, the parents fight their own battle between loyalty to their son and justice for the victim. (eight episodes totaling 402 min.) 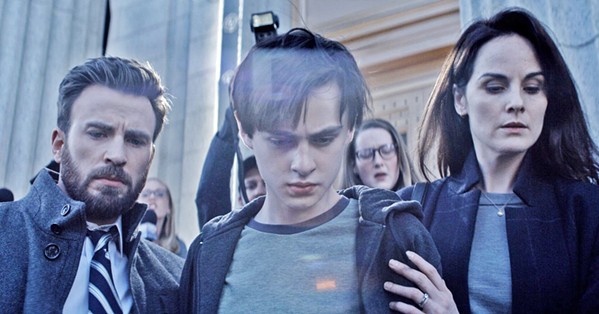 Glen This delicious, multilayered mystery is cleverly designed to keep viewers pinballing between "did he or didn't he do it?" We see the Barbers' happy home life and normal parent/child relationship—a loving marriage and seemingly healthy nuclear family. When Andy, a highly respected attorney and pillar of his suburban community, is assigned to teenager Ben Rifkin's murder, he seems like the perfect man for the job—thorough, tenacious in the courtroom, and fair-minded. As the case proceeds, a possible suspect emerges—convicted pedophile Leonard Patz (Daniel Henshall)—who regularly walks through the park where Rifkin's stabbed body was discovered. Seems like an easy case, but soon thanks to comments on an online message board, the DA shifts its attention from Patz to Jacob, and due to the obvious conflict of interest, Andy is replaced by his ambitious colleague, Neal Loguidice (Pablo Schreiber). This sets up the court case to follow.

Anna It's no secret that I love a courtroom drama, and Defending Jacob manages to keep both satisfaction and mystery at the forefront. Let's face it—teenagers aren't usually the best decision-makers, and when Jacob is put under scrutiny, he waffles under pressure. He's not supposed to be on social media, except secretly he is still, and he's holed up in his house with only his parents for company. His friends for the most part have turned on him, and the rumors and accusations won't stop flying. Evans does a fantastic job playing the young boy's father and advocate, while Dockery is amazing as the ever more doubtful and ever more on edge mother whose own life and position get pulled away from her in all the drama. There's no clean ending here, and that's what this series does best—it will make you argue over and over about it in your own head. What wouldn't you do for your child? What are you willing to force yourself into believing for their sake? What really happened here? It's all a jumble and a mystery, and it kept me on my toes the entire time.

Glen It's a very effective character-driven story, and the principal actors are terrific. It gets an amazing boost by the appearance of J.K. Simmons as "Bloody" Billy Barber, Andy's estranged father serving time for murder. Did the senior Barber pass on the "murder gene" to his grandson? Also added to the mix is Cherry Jones as Jacob's defense attorney, Joanna Klein, who usually battles Andy in court—but this case now finds the former opponents both working on Jacob's behalf. Twists and turns await! Who's the mysterious Father O'Leary (William Xifaras), who seems to be watching the Barber residence from his old hulking Lincoln sedan? In another neat twist, we see flash-forwards to a grand jury proceeding in which Loguidice aggressively questions Andy. We're in the dark about what it's concerning, but clearly something else has happened that isn't revealed until the very end. Mystery fans, this is worth the 400 minutes, and if you know the novel, don't expect the ending to be the same. It's not.

Anna Perhaps it's the ambiguity that makes it even more convincing; after all, many cases that make it to a jury trial are not black-and-white and easily sussed out. Jacob himself is a quiet, seemingly normal kid. But then again, the murder victim was his bully, and there are many signs that point to his guilt. His one friend, Pam (Betty Gabriel), who sticks by him and actually spends time with him while he awaits trial, is a brief light in a long dark tunnel. Even Andy gets caught looking not so innocent when he finds and decides to destroy some evidence before it can be found. I won't go into spoilers here, but the twists that finished off the series left me with mouth agape and also furious that I still didn't know what the answer was. It's a crime-drama lover's dream and nightmare. I'm still thinking about this one. Δ