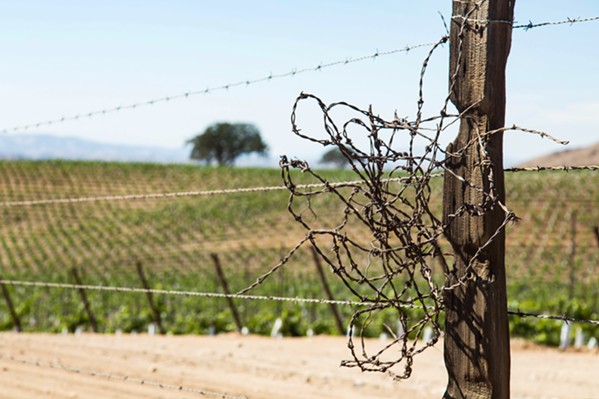 A Santa Clara County jury served four Paso Robles-area government agencies a victory in court on Sept. 24, concluding in a unanimous ruling that those public water purveyors had established a right to pump from the Paso Robles Groundwater Basin—even in adverse conditions, like a drought.

After a month-long trial stemming from a 2013 lawsuit filed by private landowners, the jury ruled that the agencies—San Luis Obispo County, the city of Paso Robles, Templeton Community Services District (CSD), and San Miguel CSD—successfully proved that they'd established overriding rights to basin water between 1981 and 1990, when the aquifer was in a state of overdraft.

Hundreds of property owners surrounding the communities of San Miguel, Paso Robles, Shandon, Templeton, Atascadero, and Santa Margarita filed the "quiet title" claim during the last California drought, claiming a right to the groundwater under their properties.

At question in the case was whose groundwater rights take precedence—the overlier or purveyor—when the shared water source is in overdraft, roughly defined as when overall pumping exceeds the aquifer's safe annual yield.

"It means we have a co-equal right to pump in the basin that the people overlying have the right to do," said Dick McKinley, Paso Robles public works director, of the ruling.

Collectively, the prevailing governments serve water to tens of thousands of residents in North County.

Now to what extent those agencies can legally pump water during overdraft conditions remains to be seen. That will be decided in the next phase of the case.

In trying to prove the prescriptive rights, the agencies failed to sway the jury that basin overdraft conditions existed after 1990—meaning, any future rulings will be based on pumping between 1981 and 1990. This wrinkle is where the coalition of plaintiffs are hanging their hats in victory.

"The recent claim by the governmental entities that the jury sided with [them] distorts the truth and the impact of the jury's decision," lead plaintiff and Paso Robles vintner Cindy Steinbeck said in a statement. "The amounts pumped and used by the defendants back in the 1980s were minimal."

Steinbeck predicts that the case's end result for the landowners will be a "nominal, extremely small percentage of claimed prescriptive rights" against their properties and right to pump groundwater.

On this point, Paso Robles' McKinley isn't worried, either. He anticipates that the "lowest end number" in terms of the city's allowed pumping will be "not much less than what we plan to pump in the long run" for its build-out to a population of 44,000.

While the ruling may have the biggest effect on Paso Robles in terms of future plans, it is perhaps most consequential for the communities of Shandon, Santa Margarita, and San Miguel—small towns that are totally dependent on water from the Paso Robles basin. The city of Paso, in comparison, has two additional water sources: the Salinas River and Lake Nacimiento.

"If the case were to have gone the other way, those people would die," McKinley said. "They would die so people could grow grapes."

The remaining party in the litigation that wasn't affected by the most recent verdict is the Atascadero Mutual Water Company (AMWC). Instead of asserting prescriptive rights to the basin groundwater, the AMWC is arguing that it is a basin overlier, like the individual landowners that filed the suit. AMWC's origins date back to 1913.

"We're a private company, not a public entity," said John Neil, the company's general manager. "Our service area used to be a 24,000-acre cattle ranch. E.G. Lewis bought that and formed the water company. ... We hold in trust the water rights of that original ranch. Those rights are no different than the plaintiffs' water rights."

Neil said AMWC is awaiting its turn to defend itself in a separate trial in Santa Clara on Nov. 16. The stakes are high for Atascadero residents, he said.

"Half of our water supply comes from the Paso [basin]," Neil said. "It's a big deal for us."

To date, the five defendant agencies have spent a collective $5.7 million on attorney, hydrologist, and travel fees related to the quiet title case, according to data requested by New Times.

And the costs, paid for by taxpayers and ratepayers, will continue to climb as the case drags out. Officials say some of those costs will be recouped by the plaintiffs.

"It's really unfortunate," Neil said. "We could've applied that money to do projects that maybe could've reversed the issue we're seeing."

Between the high costs and stakes, tensions among the opposing parties run high. The government agencies blame the landowners for starting what they view as an unnecessary, costly, and adversarial fight. The landowners blame the purveyors for managing the aquifer irresponsibly, and then pummeling them with new regulations, like the county's groundwater offset ordinance, passed during the last drought that restricted new agricultural plantings.

Whoever's at fault, the financial impact is indisputable. The San Miguel CSD recently passed dramatic water rate increases on its 851 customers—with water bills doubling for some households. Expenses related to the quiet title litigation have been crippling for the district's books, General Manager Rob Roberson said.

"It comes directly out of our operational expenses and has diminished our reserve funds," Roberson said. "This has put us in a situation where we had to raise our rates and put off some of our projects, which will inevitably be more expensive in the future for us to deal with. ... We don't know what's in the future. We still need to protect our rights to the water. We can't elect to partake or not partake, because if we don't defend ourselves we're automatically surrendering our rights that are disputed." Δ