It’s been nearly six months, but the first in a series of trials for the San Luis Obispo County residents arrested after a controversial December 2010 investigation of medical marijuana collectives may be nearing jury selection. 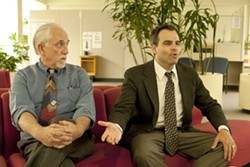 At times, it appeared as if the case wouldn’t even make it to trial.

Between May 20 and 24, attorneys on both sides of the case spent three days in front of a meditative—though at times visibly agitated—SLO County Superior Court Judge Barry LaBarbera, arguing back and forth on the specifics of what some people consider to be a murky California state law regarding medicinal marijuana.

Miller, along with his son, was the founder and operator of Harmonic Alliance, a medical marijuana collective. He made regular deliveries to collective members.

Following the two-month investigation—dubbed “Operation Green Sweep” by the NTF—15 people from SLO and Los Angeles counties were sent to jail on charges that included illegal marijuana sales, illegal cultivation of marijuana, and child endangerment. Protests from medicinal marijuana activists exploded around the courthouse, and many residents were left wondering how the SLO County District Attorney’s Office would handle the mess.

At first, the defendants were emboldened after the DA rejected the NTF cases against three of the arrested. Now, however, the office has officially stated its position: Exchanging marijuana for money in any capacity is illegal. Miller’s attorneys, on the other hand, argue that his provision of cannabis to card-carrying, doctor-recommended members of his collective in exchange for “reasonable” compensation is protected under California’s Compassionate Use Act, and further protected by recent case law.

On March 9, the DA filed a motion to exclude a medical marijuana defense, saying it was “irrelevant” to the case. Miller’s SLO-based attorneys, Patrick and David Fisher, filed a response asking the judge to reject the motion.

On May 20, LaBarbera—a former district attorney for SLO County—was put to the task of weighing both sides of the argument, ultimately having to agree with either the defense or the DA’s interpretation of the law.

LaBarbera didn’t buy the DA’s motion, saying there’s more than a reasonable doubt as to whether Miller was operating within the parameters of state law, and though he couldn’t make that ruling, he said he would leave it to a jury to decide.

“I’m struggling with the idea of having [Miller] charged with these crimes and not having him be able to tell a jury what his defense is,” LaBarbera said.

In the motion, Deputy DA Sandy Mitchell argued that state law does not protect individuals selling marijuana as part of a collective, unless each of the members had a hand in cultivation and decision making.

“It’s not about Mr. Miller, or anyone else—it’s about the law,” Mitchell argued.

And the laws on the books are under debate. Both attorneys cited past cases as supporting their stance, as well as a set of guidelines published by former Attorney General Jerry Brown on how medical marijuana providers are to legally operate. Law enforcement agents, however, argue that those guidelines aren’t legally binding, and as of May 20, LaBarbera said he hadn’t even read those guidelines.

Essentially, the case comes down to interpretation of the definition of “collective.” And if the DA’s definition is accepted by a jury, Miller has no leg to stand on. But if the defense’s definition wins the day, so does Miller.

One of the backbones of the DA’s argument is that Miller was charging too much for the marijuana. Under state law, medical marijuana collectives are supposed to be nonprofit, and can only accept monetary compensation to cover overhead costs. SLO Police officer and lead NTF investigator Jason Dickel—the prosecution’s main witness in the case—testified that one ounce of marijuana costs $38 dollars to grow, based on a 2010 study by RAND Corp., a nonprofit international public policy think tank.

Though Miller wasn’t selling ounces, his price scale translated to roughly $250 per ounce—what Dickel called “street prices.” However, the study, which Dickel described as a “cost analysis on what it costs to cultivate marijuana,” was actually intended by its authors as an analysis on what effects marijuana legalization would have on consumption and public budgets in California, ahead of last year’s Proposition 19 and legislation introduced to the State Assembly.

“Well, it’s our opinion that those aren’t legal, either,” Mitchell responded, referring to those dispensaries.

LaBarbera’s decision leaves the prosecution in a bind. Mitchell stated she doubted if she could move forward in the case, indicating she could reject Miller’s case and appeal LaBarbera’s decision to the district appellate court. But before she could make that decision, she requested to review the specific jury instructions in an effort to salvage the case.

LaBarbera reviewed both the defense and prosecution’s instructions for the jury—how they should interpret and consider key facts and testimony—and spent nearly an hour juggling the two parties’ requests for crafting their own interpretation of the law into the instructions.

“I could just give them the entire statute, have them read the entire thing, and tell them ‘You figure it out, because we can’t,’” a perturbed LaBarbera said.

Then, with just minutes before the deadline to call for jury selection, when Mitchell was expected to announce she couldn’t move forward, she declared that NTF investigators had recently—in the previous few minutes—brought forth new evidence to the DA’s Office. The new evidence included e-mails, according to Mitchell, sent by Miller, which discuss “making money,” and which she described as a “game-changer.” She did not provide any further details.

Given the new evidence, the jury selection will now be set back indefinitely while the defense reviews the material.

When the parties eventually get around to selecting a jury, it won’t be the easiest process, especially for the prosecution. Factors such as confidential medical history and self-incrimination will prevent attorneys from asking prospective jurors if they are or ever were medicinal marijuana patients, or if they ever have—or regularly do—smoke marijuana, illicit or otherwise.

Mitchell said she couldn’t comment on the case, as it is pending.

Previous developments have already made it obvious the DA would rather not see this case get in front of a jury. According to Fisher, Miller received an offer from the prosecution before the motion hearings in which they would reduce his charges to a misdemeanor and three years of probation in exchange for a guilty plea. Miller rejected the offer.

“I’m not going to plead guilty when I was obeying the law. Forget it,” Miller told New Times. “I feel like [the DA is] using my life as a political football. Why do you have to have someone’s head in a noose to have the laws explained?”