The Little Dancer of Fourteen Years, or La Petite Danseuse de Quatorze Ans, a sensationalist piece by Edgar Degas, shocked Paris at its unveiling. Critics compared the young ballerina to a sexualized monkey, an Aztec, or a small pickled fetus. The sculpture’s unusual subject provoked an investigation, still ensuing, into Degas’ relationships with the little dancers he depicted in countless drawings. The model, depicted with stark realism, was Marie Van Goethem, and her captivating story continues to be surrounded in mystery. 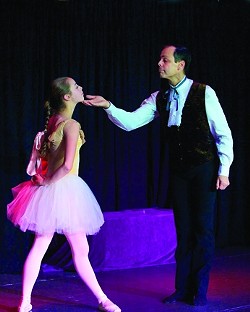 Degas’ relationship with the dancer has been analyzed relentlessly, most recently in the original production Degas and Marie by Ballet Theatre San Luis Obispo, which sees its premiere Dec. 15 alongside a revival of The Velveteen Rabbit. Many have pondered over whether the sculpture depicts a ballet star, a victim of child abuse, or even a criminal. Critics noted what they saw as an animalistic forehead and jaw, believing Degas was using monkey signifiers to depict lower-class Parisians. Anthea Callen, in her work The Spectacular Body, argues that the sculpture’s asymmetrical skull shape is “indicative of excess development of the animal hemispheres of the brain.” This animalistic anatomy in the skull was believed to indicate low ranking on the evolutionary scale, predisposition to vice, sin, and thus criminality.

To further add to the scandalous nature of Degas’ dancer, he drew detailed sketches of Marie naked before making the infamous wax sculpture of her. Degas had no wife and no mistress, and his sketches solely focus on the female dancers of the Paris Opera, largely ignoring their male dancing counterparts. Thus, his personal life remains an enigma, and suggests a potentially provocative, sexual undercurrent to his relationship with the 14-year-old working-class Marie.

However, one could argue that although Degas’ sketches of young girls were explicit, they indicate the obsessive nature of his work. He could have been completely detached and creating an objective depiction, aware of the old masters’ techniques where one would work out the poses for sculptures in the nude and then later clothe the muses.

Degas’ relationship with women is largely linked to his animalistic depictions of them, and this may explain his seemingly detached relationship with his models. In 1881, the finished sculpture was displayed in a glass box. In 1886, Gustave Geffroy remarked that Degas did have a tendency to depict his women in “animal terms alone, like high-class illustrations for a zoological treatise” as the little dancer in the glass box may have evoked. He depicted the dancers—or “the little rats,” as the young girls in the corps de balle were known—in their rawest form. Degas himself noted to the painter Georges Jeanniot, “I have perhaps too often considered woman as an animal … I show them without their coquetry, in the state of animals cleaning themselves.”

Degas’ sculpture is presented in such a way that clearly leaves it open to interpretation, and the new ballet, Degas and Marie, gets inside the glass box and explores the story from a new angle. Ballet Theatre Artistic Director Theresa Slobodnik has adapted the tale, and she neatly cuts through the speculation to present the anguish and beauty underneath the enigmatic story. Slobodnik combines both fact and fiction in her choreography: There is charming elaboration, such as Marie Van Goethem’s father making the infamous tutu that adorns the sculpture. Details such as this add an extra dimension to the tale, modernizing it and moving the story along in the ballet sequence.

The production centers on the untold story of Marie and the Van Goethem family. The ballet opens with mothers taking their daughters to the Paris Opera for their ballet exam. The mothers (Ana Worthe, Rachel Green, and Maranda Hunter) eagerly mob Degas in rehearsals in an attempt to coerce him to paint their daughters. The combination of act and dance is riveting. One’s eyes are swept from a mother’s complex ballet steps to stop Blair London, playing Degas, in his tracks, to the presentation of their respective children. The music coordinates beautifully with the heightened tension of the scene, and I can only admire the faultless complexity of the dancers’ movements.

“In my research for music to accompany Degas and Marie, Slobodnik said, “I looked for music in which I could see the ballet’s story line: music with narrative quality. I then make edits, to repeat themes for certain characters and events. This brings a continuity to the storytelling.”

The composition used is Reveil De Flore by Riccardo Drigo a the late-19th century piece containing the warmth, beauty, and diversity necessary for accompanying a theatrical story ballet.

We see Marie accepted into the Paris Opera, with a beautiful miming gesture by the Ballet Master, played by Sam Artho-Bentz. When Marie and her mother, played by Nicole Holst, rush home and tell her father the news, he presents her with a beautiful tutu he has made. Yet her father (Thomas Bourne) is sick, and after a visit from the doctor, it becomes clear that no money will be left for Marie’s ballet lessons. Marie rushes to ask Degas if she can model for him, and he gruffly agrees. After a group session posing for Degas, Marie dances alone as if she’s a soloist on the Paris Opera stage. Degas returns to retrieve a forgotten hat and is inspired by the young dancer. As the story continues, Marie’s earnings from Degas must now be used to pay the doctor. Consequently, she’s refused lessons from the ballet master, as she can’t pay. Months later, after her father’s death, Marie and her mother return to the Paris Opera to watch a performance. However, Degas waylays them in the foyer after the performance, where he reveals the sculpture of the little dancer wearing the tutu her father made.

The staging of the ballet is both inventive and captivating, with the performers required not only to dance, but also to act. Each scene I had the pleasure to watch in rehearsal was imbued with the same choreographic creativity and performed with the same zest by the dancers.

“Degas’ paintings have served wonderfully in helping create the look and shapes of the choreography, costuming and settings,” Slobodnik explained.

The sweeping dance scenes give a visual weight and introduce the audience to the talented cast. Yet there’s a huge range of abilities within the company: From teeny tiny children donning little tutus to help recreate a Parisian street scene, to the enviable skills of those playing the professional dancers of the Paris Opera Ballet, the casting is enchanting. Blair London plays Degas with a touch of pompousness reflected in his steps.

Slobodnik’s adaptation, she says, “portrays Degas as an abrupt, self-centered artist whose only concern is his artistic vision. People and money means little to him, except what they can do to facilitate his work.”

Shae London, who plays Marie Van Goethem, and is incidentally Blair’s daughter, is certainly one to watch. Beside Marie’s family’s financial struggle and the loss of her father, Slobodnik says of Marie that “her dream to dance is broken, and yet she becomes immortalized as Degas’ Little Dancer.”

Shae kept me enraptured as she danced numerous series of steps that looked very complicated, yet with an unfailing grace and delicacy. Far from being presented as a “flower of the gutter,” Marie Van Goethem represents the untold tale of a muse.