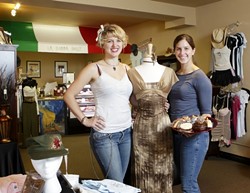 # Shopping in Morro Bay for junior's clothing is practically impossible. As a quiet beach town, Morro Bay's shops generally stick to surf apparel: board shorts and sweatshirts. Morgan and Rhiannon Mistretta, sisters who offer more than cute clothing at their store, want to change that. What began as a simple "itch to open a store" turned into a shop that brings two very different items together: apparel and sweets.

Romanza Apparel and Sweet Shoppe is anything but a simple clothing store. Not only is most of the clothing designed by Rhiannon, a Fashion Institute of Design and Merchandising graduate, but Romanza also offers an array of gourmet desserts made by Morgan, a recent graduate of Le Cordon Bleu Culinary School in Pasadena.

"Come in, buy a gift, top if off with a card and dessert, and you have yourself a romantic evening," Morgan said.

Starting from scratch on a building that was just a frame, the Mistretta sisters put in long hours and late nights of renovations to convey an image of romance and cabaret that would separate them from other clothing stores in Morro Bay. With light brown-painted walls, the contrast between the region's typically cloudy skies does just the trick.

"I think just everything we have is different. You don't always want to get cute girl stuff at a surf shop. We're one of the few with just junior apparel that's not in a surf shop. We want to bring in some excitement," Rhiannon said. "We're right now trying to figure out the personality of the shop. It's more vintage-romance. We're supporting romance."

For now, the sisters are content with their store and location. In the future, they hope to carry strictly couture designed by Rhiannon and an online catalog so customers can purchase clothing on the web.

"Something in old Pasadena would be fun," Rhiannon said, "but for now we figure this could be the beacon of it all."

To order print-screen T-shirts or just spend some cash, visit Romanza Apparel and Sweet Shoppe at 725 Embarcadero in Morro Bay or call 771-9096.