Moe is one of those Japanese terms that is frustratingly hard to define in English. Often used to describe preadolescent anime or manga characters, the word (pronounced mo-ay) stems from the word for “budding,” a fact that, though vaguely creepy, does little to clarify the word’s colloquial meaning. Moe has been used as a noun and defined as “rarefied pseudo-love for a fictional character,” but is also employed as an adjective by anime fans, taking the place of “cute” or “adorable.” 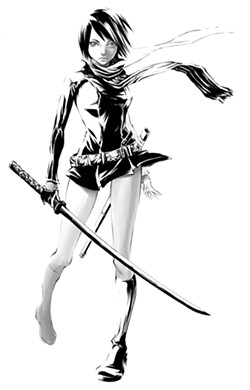 Ask the organizers of Anime Five Cities, and you’ll get a round of sighs, followed by a cascade of varying opinions. Paula Angeles, the convention’s founder; her husband and AFC staffer Todd Whitesel; and Convention Chair Scott Melot eventually agree upon “an endearing quality”: an accent, a special talent, hair falling in the eyes. Perhaps glasses that slide down the nose.

A conversation with Angeles, Whitesel, and Melot—avowed anime fans who ascended in the ranks of geekdom to become the instigators of the Central Coast’s first anime con—frequently requires explanatory footnotes. “Moe” is a perfect example, a term the three casually toss about to describe the appeal of Japanese maid and butler cafés, where guests come for a drink and an interactive, costumed performance by moe-tastic butlers and maids, much like dinner theater, or a more innocent take on entertainment by a geisha. (Animaid Café, a company based in Los Angeles specializing in the maid café experience, unfortunately cancelled its AFC appearance due to overbooking a few weeks before the convention.)

Sure, AFC’s colorful world of Japanese slang, wild costumes, and obscure anime references is dizzying, but once inside, who could possibly leave? The annual convention, which started just last year at the Avila Beach Community Center, drew upward of 250 enthusiasts in its first go, quickly filling the small venue and taking the convention’s limited staff by surprise.

“There are some anime clubs that are around,” said Angeles, citing Cal Poly’s Mino no Anime, a fan club in its 20th year. “So you would think that there would be a lot of people who would be aware of anime and of Japanese pop culture. But nobody started one here. So we said, ‘You know what? Let’s start one.’”

This year has seen AFC move to the larger Ludwick Community Center in San Luis Obispo—with twice as many staff.

The convention typically features a cosplay contest—in which contestants are judged for their craftsmanship in making their own anime costumes and for short scenes they perform. Attendees will also get the chance to meet guests of honor: local manga illustrator Irene Flores and voiceover actress Lauren Landa, known for her role as the sexy Litchi Faye Ling on the video game BlazBlue: Calamity Trigger and its sequel BlazBlue: Continuum Shift.

Landa’s job dubbing for anime and games is so integral to the entertainment landscape, you might forget it exists. But her voice is crucial to bringing the characters of Japanese shows to English-speaking viewers.

“The translations from Japanese to English can sometimes be very awkward,” Landa laughed in a phone interview. (Her early voice credits include work on the shows Magical Girl Lyrical Nanoha and The Familiar of Zero—see what I mean?) “But they’re just as awkward sometimes in Japanese as they are in English.”

While the role of Litchi is without a doubt a fan favorite, Landa claims her best performance was a tiny but significant role she voiced in Naoki Urasawa’s series Monster.

Illustrator Flores, who, incidentally, also designed the convention’s cute kitty mascot Mochi, grew up in the Philippines watching both Japanese and American animated shows. A glimpse into her portfolio reveals a mastery over many different subjects and styles, from manga characters to Lady Gaga. The artist will do a panel discussion at the convention on breaking into the manga industry.

“It’s really nice that we’re having it here,” Flores said of the upcoming convention. “It’s pretty exciting. I hope it gets bigger, because it really is the only one in the area. I think
we needed it.”

The artist first illustrated for the now-defunct anime and manga publisher Tokyopop, and later for DC Comics, Impact Books, and Wildstorm. Flores recently released an instructional book on drawing anime characters, and another is in the works. Ironically, Flores herself is largely self-taught, preferring hands-on experience to formal schooling.

This year, as Japan recovers from the devastating earthquake and ensuing tsunami that wracked the country three months ago, AFC will partner with the Santa Maria-based Japan Earthquake Tsunami Support (JETS) relief fund. JETS will auction anime and costume play stuff—donated by Cosplay in America and Pacific Media Expo—for bidding in a silent auction, as well as an autographed photo of Japanese-American activist and Star Trek star George Takei.

The convention is sure to attract its share of crazed animaniacs, but organizers insist it’s just as much for those who are curious about the genre or about Asian pop culture in general.

“You only have to like one aspect of the genre,” said Convention Chair Melot. “We see it as unifying, rather than building, a community.”

“It’s like any carnival or summer festival,” Whitesel added.

“Yeah,” agreed Melot, “except ours have giant costumes and robots.”

Fullmetal Vampire Hunter Arts Editor Anna “Bebop” Weltner 1/2 can be given much conversation at aweltner@newtimesslo.com.