New Times I was reading about Thoroughly Modern Millie and I noticed that the language is really colorful. Does that come across in the stage version?

Ryan Cordero Yeah, they [the writers] used the lingo from the 1920s and kind of poke fun at it. In one scene, one of the characters says “I’m sorry, I don’t speak New York yet.” It is really funny. It is a great way to tie the costumes, hair, and everything, into the show. 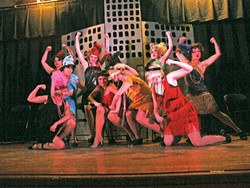 New Times Tell me about the costumes and sets.

Cordero Since the show is based on the movie, we wanted to give a nod to that. This is where the show began, most of the set and props is in black and white and we have some gray going on. We made the costumes and lighting very colorful. These characters live in this classic world but they stand out against it. Donna Sellar’s costumes are amazing and fantastic. The red flapper dress is in the picture and it’s stunning on Lindsey Geibel (who plays Millie) She goes to Cal Poly and is from Atascadero.

New Times Was it tough to find your Millie?

Cordero At our callbacks we had four girls auditioning for Millie, and all four brought a different interpretation of Millie, and it was one of the hardest decisions to come to.

New Times Tell me about the music in Thoroughly Modern Millie.

Cordero It’s fantastic, it’s 1922-era jazz, and we have a live orchestra for the show. Very lively dance numbers, ballads, comical songs. The music is very representational of the time. Some of the music gives a nod to some of the classic singer/songwriters from that time.

Cordero They brought Thoroughly Modern Millie to the stage because Millie is such a great female character and she represents the ideal of the ’20s, but she has a lot of modern relevancy as well, and it was just what the doctor ordered, on Broadway.

New Times What do you want theatergoers to know about this show?

Cordero Quality wise, this show is something that the Central Coast has never seen. These are volunteer actors. When I founded Sorcerer Productions I only wanted new people with new ideas … new actors, singers.

New Times Why did you choose Thoroughly Modern Millie as your first production for Sorcerer?

Cordero After I listened to the music on a CD that was given to me, I instantly fell in love with the sound, the energy, and the time period. I knew I wanted to direct this show, at some time in my life.

Cordero We are looking into a farce comedy, and another large musical scheduled for next summer–maybe The Producers. And the hysterical show Dirty Rotten Scoundrels. Newer shows that haven’t been seen. Not only musicals.