Demons and monkeys and gods, oh my!

A Santa Barbara production dazzles with sage wisdom and acrobatics

Seven demon masks. Eight monkey tails. An evil god equipped with 10 heads and 20 arms. Seventeen shadow puppets of chariots flying across the sky, gods and goddesses riding eagles and elephants. It’s been a busy summer for Timo Beckwith, a multi-talented artist who in June was charged with creating the more than 50 accessories for Boxtale Theatre Company’s production, OM, an Indian Tale of Good and Evil, playing in Santa Barbara through Oct. 4.

“I have worked almost an inhuman amount on this project,” said Beckwith. “Over 1,000 hours easily. This show had a lot of new challenges for me.” It’s not surprising, given the Santa Barbara-based theater company’s reputation for staging lavish, artistically charged productions that incorporate circus-like story-telling devices such as acro yoga (a meld of acrobatics, yoga and Thai massage), mime, stilt-walking, bungee jumping, and aerial silks.

In OM, the ambitious company interprets an ancient 24,000-verse Sanskrit epic poem Ramayana. The tale of Rama, the son of king and incarnation of the god Vishnu, features coronations, exile, kidnapping, monkey gods, warfare, and birth. Two of the tale’s three principals traveled to India to attend a three-week theater, dance, and martial arts workshop.

Originally, Ramayana was slated to be performed a few years down the road. According to Executive Artist Director Michael Andrews, Boxtales Theatre Company has already selected its next six shows, which will be performed over a decade.

“We usually read about 200 stories each year,” he explained. “The Ramayana’s been on our radar for a long time. We loved the characters in it, and what they represent.”

While the potential production value behind flying demons is high, what initially attracts Andrews to the mythological tales he helps stage is the folk wisdom ingrained in each tale. In the case of Rama, the hero of the production, the fact that the character is a god in a man’s form was intriguing. How he would react to the many obstacles he encountered could serve as inspiration for audiences. Paying homage to ancient stories is also a way of combating what Andrews perceives as contemporary society’s tendency to throw things that are old away.

Twelve performers—six men and six women—breathe life into the ancient tale, one of them acro-yoga instructor Jenny Sauer-Klein. The cast was selected for their acting skills, but also for their physical abilities; acro yoga is not for the weak or inflexible.

Though Beckwith had never collaborated with Boxtales before, he was friends with an artist who made masks for the company and was familiar with their work. Beckwith has been making masks since he was 12 years old. He makes them for parades and movies, and sometimes simply for his own pleasure or amusement. One year he made 28 Arctic timber wolf masks for Mardi Gras. He also taught mask making at the Esalen Institute. Those decades of experience would be necessary for him to complete the task assigned by Boxtales. 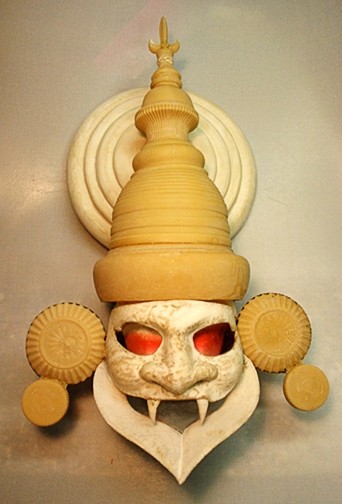 Beckwith started with drawings. He sketched his visions for a week, before turning them over for appraisal from the theatre company. Once the plans were approved, he moved forward with sculpting, casting, and molding.

For the monkey masks, Beckwith sought inspiration from classical depictions of Hanuman, the monkey god, who physically resembles a human with the deviation of a monkey muzzle and snout. He used neoprene and latex in a process that allowed for greater control of fine details. Also, this process made it easier for him to produce eight identical masks. For the demons Beckwith utilized layers of thermoplastics and sculpted Styrofoam to create a rougher appearance.

The monkey tails posed a new challenge; Beckwith works with lighting, music, and photography but he had never before been charged with making a tail.

“It’s a very important part of a monkey,” said Beckwith, seriously. “They’re always doing something with it, unless they’re in complete repose.” To create an appendage that would convey emotion, Beckwith utilized a long process, which began with embedding an aluminum frame in Styrofoam. This leaves the performers to negotiate how they will do acro yoga while wearing a monkey tail.

Then there were the shadow puppets, another new endeavor for Beckwith.

“How do you depict a God? Or a group of gods flying around in the skies,” Beckwith posed the company’s challenge. In Indonesia, Ramayana is a popular shadow play tale, with performances often lasting an entire day and entire villages turning out for a show. Another artist made the forms, which include a horse drawing a chariot and characters flying on an eagle and riding an elephant, and then the company tapped Beckwith to add the finishing touches, including the all-important detail of making the puppets operable.

While visually stunning, many of the masks and accessories are proving a challenge to the performers. One of Andrews’ roles is the antagonist Ravana who is portrayed in the same manner as in the Indian kathakali tradition. To a modern audience, the demon appears to be wearing a large tutu, along with six-inch fingernail extensions, a mask, and headdress. During his battle with Rama, the theater company has Andrews attached to a bungee, flying around the stage. The effort of bouncing around stage in a tutu is a difficulty, to say the least, but one well worth resolving, according to Andrews.