It’s 10 a.m. on a gloomy Saturday morning on Jan. 21, and a crowd of smiling men, women, and children is starting to grow at Mitchell Park in San Luis Obispo. The sprinkle of pink PussyHats, handmade shirts, and Planned Parenthood scarves pours in. We’re all gathering at the park in support of women’s rights and human rights in solidarity with the Women’s March on Washington, D.C. 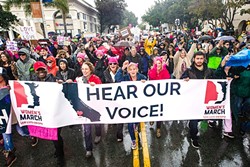 The air is filled with murmurs of seeking peace, angst with the new administration, and a hope that this collective voice will be heard. There are signs that read, “My body, my choice,” “Make America kind again,” “With liberty and justice for ALL,” and “United we stand”—to name a few. Although prior to the march, the organizers stated that the event was bipartisan, it’s clear that there’s a unified sentiment of negativity toward the new occupant of the White House.

We surround the gazebo in the middle of the park that acts as the stage, and as the speakers commence their rallying speeches and singers perform ballads of unification, I take a step back to realize that a flood of people, estimated at about 10,000, is surrounding me. As a light rain blankets the tops of our pink beanies and hoods, the speakers call for us to think beyond our reasoning for being here. Who are we marching for? For females, males; for people of all ethnicities; the LGBTQ community; and for a positive future.

What speaker Courtney Haile of Court Appointed Special Advocates (CASA) in SLO says strikes a cord in me.

That sentence ripples through the crowd with cheers and roaring applause. And after one more speaker, the march begins, albeit rather slowly—again, this number of people wasn’t anticipated. I don’t think the number really hits me until I’m walking down Marsh Street and look down Garden Street, only to realize that the march is already wrapping around downtown SLO. And that’s when the rain starts to quicken into a downpour, but that doesn’t stop us.

As we make our way down Higuera Street, shop owners stand outside and cheer, some wave their own signs in support.

Through wet and cold, people chant, “We stand united.”

Unity—that’s the main goal and message. We may not support the agenda of the incoming administration but we will be vigilant of how its every move will affect us, the citizens of this country.

With a population of about 270,000 people, approximately 3 percent of SLO County’s population is on the streets as part of the Women’s March movement. We are here, part of a movement that is simultaneously taking place at about 600 locations across the U.S. and other parts of the globe. Millions of people are watching the White House’s new administration—and there’s no factual alternative that can deny it.

Karen Garcia is standing in solidarity for human rights at kgarcia@newtimesslo.com.