Dennis Mukai's Just Looking Gallery retrospective brings out the collectors and the models! 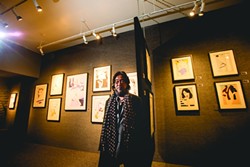 It’s Saturday, Feb. 22, and I’ve just strolled into the Just Looking Gallery for the Dennis Mukai retrospective. The gallery has rolled out the red carpet for this event, with Malik Miko Thorne spinning wax in the breezeway, lots of food, and a guy whipping up martinis.

The first people I meet are a couple who flew in from Reno to get a chance at picking up some of Mukai’s original and signed numbered editions of work he did in the ’80s.

“Are you guys going to go home with some of this?” I ask, gesturing toward the walls filled with beautiful women.

“Yes,” she says, nodding. “Our whole house is filled with this.”

The two are big collectors and have an air of being pampered—tan, well dressed, probably personally trained. At $2,750 for an original marker drawing, you’ve got to have some coin to pick up these iconic ’80s images. There’re also a bunch of limited edition signed and numbered prints of nude female torsos that appeared in Playboy.

I see a guy with a nice camera and ask if he was hired to photograph the event, but it turns out he runs “The Unofficial Dennis Mukai Web Page.” The guy started the web page right when the Internet got going, and by the time Dennis got around to developing his own page, he discovered this one.

“Normally I’d tell someone that’s copyright infringement and ask them to take it down,” Dennis tells me a bit later, “but it was so thorough and exhaustive, I just asked him to post ‘All Images © Dennis Mukai and reproduced with permission of Dennis Mukai.’” 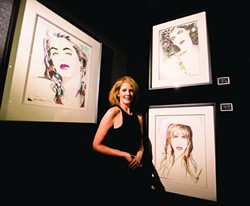 Dennis looks every inch the artist, with pointy boots and designer jeans, a scarf, and jewelry and stuff.

“Hey Dennis, I’m Glen Starkey from New Times. I interviewed you last week over the phone,” I say by way of introduction.

“Oh yeah. Hi. Thanks for the story. Usually when I do an interview I ask that they not quote me directly, but I guess I forgot to ask you. Sometimes I read an interview and I think, ‘Did I really say that?’ So when I opened up the story and saw quotes, I got nervous, but it was fine.”

Dennis agrees to pose for a photograph by his work, and New Times hipster-kid photographer Henry Bruington lines him up as I hold a fill flash.

“I think these two are my favorites,” says Henry to Dennis, pointing to two of the marker portraits. 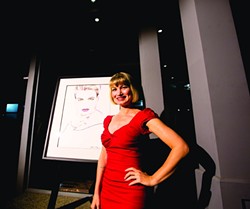 “Yeah, it would take a few paychecks,” admits Henry.

Stop the presses! In walks a tall, gorgeous woman who’s getting her photo taken by a guy who turns out to be her fiancé in front of a marker portrait that looks just like her.

Yes she is. Jane Youdelman agrees to allow us to get a photo, too, so I scoot off to find Henry, who meanwhile has met another of Dennis’ models, Rena Riffel, an actress and director whom I’ve interviewed via phone in the past but never met personally.

“Oh yes, Glen! I think you interviewed me twice.”

What a memory! Kinda smitten, got to say. I mean, Rena has been in Showgirls with Gina Gershon, Striptease with Demi Moore, and Mulholland Drive with Naomi Watts. Of course, she’s also been in Trasharella Ultra Vixon and Caligula’s Spawn. A girl’s gotta eat! Most recently, she’s turned to writing and directing, taking the helm of Showgirls 2: Penny’s From Heaven. The film was completed in 2011, but she tells me she’s in the process of redoing the sound to try to give the film another chance.

Yep, it’s feeling pretty glitzy in here. Beautiful people, ’80s music pumping out of Malik’s sound system, but just then an obviously homeless gent with a somewhat pungent odor walks in and starts looking around. Ralph Gorton, the gallery owner, loads up a napkin with some hors d’oeuvres, hands it to the fellow, and politely asks him to leave. On his way out, he sees Henry and says, “You want to take my picture?”