Deovlet Wines might not be big, but it's quality 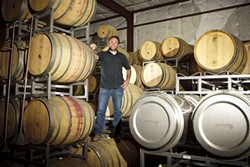 Driving into an empty parking lot beside two old-looking warehouses at the dead end of Suburban Road, I found absolutely nothing outside indicating the presence of a winery—not even a sign for Deovlet Wines. I guessed which door to open, not difficult since the first door let to a cabinetry business, and cautiously turned the doorknob. The unlocked door opened to reveal the magical place we wine lovers adore. The chilled, moderately-sized warehouse was filled with barrels stacked high, and the delicious perfume of wines aging in French oak lured me inside.

I had previously met Ryan Deovlet at the home of mutual friends, Lane Tanner and Rick Hill, but it was a party so I didn’t get to know this ardent young winemaker. I love my job, especially when it entails discovering small artisan producers. Be they chefs or winemakers, these artists put their heart and soul into their craft. And I can always taste it in the quality of the food or wine that they produce which proves they’ve committed themselves to an admirable purpose. That’s exactly what I found in the delicious array of wines Deovlet makes for his brand and in the wines he makes for the Refugio Ranch in Santa Ynez Valley.

Deovlet’s wines ranked among the finest local wines I’ve tasted recently. Frankly I rarely cover a winery without an official tasting room, or a small producer like Deovlet who’s usually sold out, believing it’s a disservice to our readers. Yet in this unusual case, I must tip you off to this up and coming winery before it becomes impossible to get to know his excellent wines. Believe me, cult status can happen practically overnight, just as it has with other Central Coast superstars, and then it’s impossible for anyone (including me) to join their mailing list.

In reality, few winemakers can hope to become cult-like. Yet I always visit small producers with an open mind, hoping to find the next cult brand. And I found the exquisitely crafted Deovlet wines had impressive qualities in all of the varieties he produces, including Bordeaux, Burgundy, and Rhone wines. Under his label, he produces several single vineyard selections of chardonnays and pinot noirs (it won’t surprise any Cuisine followers that I favored the pinot noir).

I respected the fact that Deovlet reached out and invited me to the winery to taste his wines. The first question I asked was how to pronounce his surname correctly. He explained: “The o is silent and the t is pronounced, it’s dev-let.” The articulate Deovlet began the smooth interview by telling me of his unusual epiphany. It amused me when he noted it didn’t happen over a bottle of exotic wine.

“I got bit by the bug over the farm to table approach,” remembered Deovlet, who grew up in Villa Park, Calif. “It was an early morning fishing trip when we were served really good coffee they told me was grown on their farm.”

While studying sociology at U.C. San Diego, he recalled that he began thinking about vineyard management. Thanks to another student he discovered the Willing Workers on Organic Farms (WWOOF) internship program, which provided him harvest experience on farms in Australia and New Zealand in 2004. The next year he moved to the Central Coast where he started his winemaking career at Central Coast Wine Services, working with many talented winemakers there.

Deovlet left to become cellar master under the talented Stephen Ross Dooley in SLO. He also traveled to Argentina to work under the renowned Paul Hobbs at Vina Cobos (where he slept on the floor but found it a worthwhile experience).

To create his brand, Deovlet sought advice from Santa Barbara County pioneer Richard Sanford whose educational discussion during a World of Pinot Noir seminar inspired him.

“I knew I wanted to commit to pinot noir, it’s a lifetime pursuit that’s about the journey,” Deovlet noted. Not only did Sanford befriend him, he sold him grapes from his La Encantada Vineyard from which the aspiring winemaker made four barrels of pinot noir. Like every artist who dreams of making distinctive wines, Deovlet is intensely focused: “I want to stay on the cusp of Old World-New World wines. I try to offer a kiss of California sunshine, but I have one foot in the Old World and one foot in California.”

For Deovlet, it’s not just about producing ultra-premium wines from the best Central Coast vineyards. He committed to removing the difficulties of learning about wine. “I try to demystify wine. The science can overwhelm people but I want them to come here and see how wine flows,” Deovlet explained. “I like helping people understand why I love wine and love the craft.”

That’s pretty cool and (believe it or not) something I’ve rarely heard from winemakers of this caliber. The truth is, if their wines are this good they don’t have to teach novices because wine connoisseurs will buy them out every year. Watch for my reviews of Deovlet’s wines as they become available for purchase in upcoming weeks.

Another exciting aspect of Deovlet’s social business will be a supper club series he’s creating for his club members (also available to the public if a dinner doesn’t sell out). Each of the intimate family style meals will be composed of fresh local ingredients and paired with Refugio Ranch and Deovlet wines. The first dinner features chef Jake Francis, a newcomer locally who operates a boutique pig farm.

“I want the supper club to be intimate so we’ll limit it to 40 guests to allow us to engage with everyone,” Deovlet explained. “It will be held in the winery barrel room and provide a very personal, wine-inspired culinary experience.”

Refugio Ranch has a Los Olivos tasting room if you’re in the area. Or, if you’d like to meet this personable winemaker and taste Refugio Ranch and Deovlet wines with him at the SLO winery, call Deovlet at 550-6300 or email info@deovletwines.com.

“I want people to know the winery is open by appointment,” Deovlet finished. “I have a lot of fun with visitors talking about wine and tasting wine out of barrels.”