Bob Gresens could be any tourist walking the windswept beach north of Cambria in his sea-blue Hawaiian shirt and well-worn sports shoes, inspired by the crashing surf. As Cambria's water-supply engineer, though, what he sees when he gazes on the vast salty ocean is a drought-proof water supply for the seaside town.

In the midst of one of the driest years on record, with the "D" 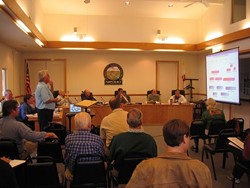 # word on people's parched lips, the focus on the Central Coast is shifting from worries of drought to another "D" word: desalination, also known as desalting.

Advances in desalting technology are combining with concerns over climate changes to create something of a perfect wave a time for a fresh look at salty seawater and brackish, slightly salty groundwater. Alongside beaches and in boardrooms in coastal communities throughout California, including Cambria, Nipomo, and Morro Bay, decisions are due on desalination.

"We want to diversify our supply. Especially in times of drought when there's not enough flow in the creeks, with seawater desalination we'd have an independent supply to draw upon," said Gresens, pointing at the rising tide at San Simeon State Beach. As district engineer for the Cambria Community Services District, Gresens bubbles with enthusiasm for desalting seawater.

Approved by a vote of Cambria residents and property owners in 2000, this desalination plant would be designed to avoid the environmental impacts often associated with the process, he said impacts such as damage to marine life at the seawater intake pipe, disposal of the concentrated super-salty brine produced in the process, high energy use, and added growth and development that might result from a new water supply.

Down the coast in Nipomo, desalination is attracting community interest, as the Nipomo Community Services District weighs the options for expanding the town's water supply. The CSD board of directors held a special meeting earlier this month to hear a presentation on desalination technology from Ernie Kertinen of Boyle Engineering.

"One reason to develop a local source of water is to get reliability," Kertinen said as he showed a graph of highly variable water delivery amounts from the State Water Project over the last 25 years.

A wide variety of desalination technologies effectively remove salt from salty water, relying on either distillation or membranes. The earliest plants were based on large-scale thermal evaporation or distillation of seawater. Since the 1970s, more plants use membranes to mimic the natural biological processes of osmosis and dialysis. Some form of desalination is now used in nearly 130 countries, with more than 10,000 desalting units installed worldwide. At least 20 California coastal communities are currently considering desalination as a long-term solution to their water supply needs

Reverse osmosis, Kertinen told the meeting, is a proven method

# of desalting seawater and brackish, slightly salty groundwater, with electric pumps generating pressure to pass water through membranes to remove salts. For every 100 gallons of seawater, this desalination process produces 50 gallons of fresh, potable water 100 gallons of brackish water become 70 to 80 gallons of fresh water. A super-salty concentrate is left over.

Nipomo board members were especially interested in Kertinen's comparison of costs. For a desal plant producing three million gallons of drinkable water a day, or roughly 3,000 acre-feet a year, the cost of construction plus operation and maintenance is estimated at around $600 per acre-foot for brackish water and around $1,000 for seawater not including obtaining the water and disposing of the salty concentrate.

"There's a big controversy about what you include in the cost. To me, you have to include the total cost of treating the water and getting it to your customers. But others say, 'You're all wet, that's not part of desalting,'" Kertinen said.

He pointed to the middle of a cutaway section of pipe, showing the meeting the tightly-packed spiral layers of a reverse osmosis membrane.

"You need big pumps," he told CSD directors and members of the public gathered for the morning meeting at the district office. Desalination uses large amounts of energy, he said, with salty seawater requiring at least two times more energy than brackish groundwater.

Most newer reverse-osmosis desal plants have installed energy-recovery systems that can reuse around 25 percent of the plant's energy, Kertinen added.

The large amount of electricity needed for desalting water was a concern for the Nipomo board, with some members calling for renewable energy sources.

"The only sustainable long-term water supply for any coastal community is desalting brackish water," declared board chairman Michael Winn in an interview after the informational meeting where no decisions were made.

# "Desalination is drought-proof, and once it's established it's not political. The key variable is the energy costs, and energy costs are rising," Winn said. "We need to be exploring solar energy."

Energy recovery wasn't included in the design when Morro Bay built its "emergency" desalination plant in 1991 during a prolonged drought. The high cost of power is a deterrent to using the desalter to create household water, now that state water is pumped into the city.

Submersible pumps have been removed from the city's five beach wells near the high school, and now lie in a dry, rust-free environment on the concrete floor.

The plant roars into action if it's needed during the State Water Project's annual maintenance in the fall, and late last year it came in handy for removing nitrates out of the city's well water. It's also been used for desalting and purifying the brackish water from some city wells, Boucher said. Concentrated salty brine produced in the process goes to the power plant's disposal system for dilution before it's discharged to the ocean.

"This was a bargain in retrospect $3.7 million, before we had state water," Boucher said.

"We don't have an energy recovery system. That's what we'd employ if we need to do an expansion. But it's difficult to justify to the ratepayers to spend a big amount for two weeks of operation, to save energy. If we use it more intensively, we start to see the benefits of energy recovery."

Boucher noted that producing 1,000 gallons of drinkable water at the Morro Bay plant requires 27 kilowatt-hours of electricity, describing the energy use as "the amount of brute force necessary to separate salt from water."

Producing three million gallons of drinkable water a day, or 3,360 acre-feet a year, at the Morro Bay plant could use nearly as much electricity as all the city's residents do, calculations show.

He added, "Does the capital investment in energy recovery make sense? That's the balance we try to achieve."

With legal battles in northern California clouding the future availability of state water for Morro Bay and other communities, Boucher concluded, "We may well do this."

State water isn't an option for Cambria, which relies on two long, narrow aquifers underlying Santa Rosa and San Simeon creeks. Seawater desalination would allow the town to protect the creeks for wildlife, Cambria's district engineer Gresens said, and could be implemented without causing environmental damage.

"People are looking at socially responsible ways to desalinate. I think it's really exciting technology, and it's getting better and better with time," noted Gresens as he explained the plans for Cambria's facility.

Rather than sucking in fish and marine organisms in an ocean intake pipe, a subterranean well would be placed deep into the gravel below the ocean floor at the mouth of San Simeon Creek. The idea is to slant-drill the well from the day-use parking lot east of Highway 1.

"All you'd see would be a manhole in the parking lot. You wouldn't see anything on the beach," Gresens said.

Disposal of the concentrated high-salt brine left over from the desalting process has been a concern in other communities. If it's discharged to the ocean without mixing, the super-salty water often sinks to the bottom, where it can harm bottom-dwelling organisms. Instead, Cambria's brine would be returned to the ocean through subterranean disposal where it would mix with brackish groundwater, Gresens explained.

The electricity to power the desalting process would be supplied by a field of solar panels. Cutting-edge film-membrane technology could be implemented to cut down on the high-energy needs normally associated with salt removal, he said.

Cambria's desalination plant itself, a building full of pipelines and pumps, would be designed to look like a barn and built on Cambria Community Services District land upstream.

As part of Cambria's "buildout reduction plan," a desalination plant would generate only enough potable water to supply the needs of existing Cambria residents, plus those on the water supply waitlist, for a total of 4,650 connections, Gresens said. Cambria's "aggressive water conservation" program, with tiered pricing according to usage, may be slightly relaxed with a desal supply, he added.

Tests of new desalting technology by the Affordable Desalination Collaboration a group of utility companies, engineers, equipment manufacturers, and government agencies at a U.S. Navy facility at Port Hueneme in southern California have shown that energy costs can be substantially reduced, according to Cambria's engineering consultant.

"There's some bad information going around on the costs of desalination," explained project engineer Tom Seacord of Carollo Engineers, during a phone interview from his Boise office.

"Engineers have been saying it takes 10 to 14 kilowatt hours to produce 1,000 gallons, but with the technology available off the shelf, we put together the most efficient system we could and got it down to 6 kilowatt-hours per 1,000 gallons," Seacord said. That's a marked contrast to the 27 kilowatt-hours used by the Morro Bay plant.

Cambria's elaborate desalination plans are, so far, just plans, with more information needed before any final decisions can be made. The Cambria Community Services District is hoping to gain Coastal Commission approval of its data collection effort, which involves test bores and monitoring wells on the beach at San Simeon Creek.

The plans have been modified to eliminate any structures or visual impacts to the beach during a four-week geotechnical investigation, Gresens said.

"This is the before-and-after picture," he said, his arms sweeping out across a roped-off snowy plover nesting area in the sand.

Depending on Coastal Commission action, the Cambria engineer hopes to start collecting scientific data once the plover nesting season is over in October. That information will be used to develop Cambria's desalination project alternatives to be analyzed in a future environmental impact report.

October is also the time when the various desalination options for Nipomo will be presented to the Community Services District in the South County town.

In Morro Bay, the future availability of state water and the resulting impacts on future desalination decisions should become clear by next spring, according to city staff.

But, statewide, "discussion of actual costs has been muddled and muddied," according to a June 2006 report by the Pacific Institute, Desalination, With a Grain of Salt A California Perspective. Cost estimates for desalting water in California and around the world have been provided in a variety of units and years that aren't readily comparable, the report states.

"Ultimately, no one can predict the actual cost of seawater desalination in coming years," according to the report.

"Is desalination the ultimate solution to our water problems? No. Is it likely to be a piece of our water management puzzle? Yes," states the report. "In the end, decisions about desalination developments will revolve around complex evaluations of local circumstances and needs, economics, financing, environmental and social impacts, and available alternatives."

In the meantime, Cambria's Gresens is concerned about running out of water.

"I see a lot of things coming together for desalination now, with membrane improvements, energy efficiency, solar power," he said. "I see it as taking advantage of advancements in technology to solve a social issue."

To him, the conclusion is clear: "Desalination's time has come."