Dessert mission: Spend a day outside so you don't feel guilty about the part that comes after dinner

Dust and smudged fingerprints stare out at the fog from my dashboard, almost willing the moisture to dissipate. The rounded cement pillars of abandoned smokestacks are all that sits above a thick layer of white in Morro Bay, but I’m not stopping there.

My nostrils are leaking, my throat feels like a cat ran its nails down the inside of it, and my eyes feel like I’ve been staring at a computer screen for three days straight, but I’m sick of being sick. The first thought I had this morning was, “I don’t want to be here.” So I left.

I got a cup of French-pressed dark roast coffee from the Lincoln Market & Deli, alongside a breakfast burrito I dream about sometimes: tater tots, avocado, pinto beans, bacon, scrambled eggs, chipotle cream sauce, and salsa. And I’m stuffing it in my face as I pray the fog clears and pretend I’m not sick.

And after I pass by Cayucos, I get my wish. I pull into a gravel parking lot along Highway 1 near the Estero Bluffs and take the dog through the gate and down by the sad brown thirst that used to be alive with green grass and shrubbery. I guess there’s water in the ocean. From here, you can walk back toward Cayucos above the ever-eroding coastline and boulders that give way to pebbled sand and the Estero Bay.

A lone paddleboarder heads toward the water. A couple of tourists gawk at the ocean. A mountain bike rider heaves herself up and down the small gulleys of the trail, occasionally stopping, occasionally walking. I start thinking about pie.

Before you judge, think about this: I’ve never had pie from Linn’s Restaurant in Cambria. It’s so famous, I’ve been hearing people wax poetic about it since I moved here in January 2013. Today, I’m determined to have some, but before I gorge myself on buttery, flaky crust with an ooey gooey berry filling, I need to exercise—not too much, just enough to curb the guilt.

But the 2 or so miles I’ve just wandered are not enough, so I get back in the car. A couple of miles north of Cambria, across the highway from the campground turnoff to San Simeon State Park—and occasionally a herd of Hearst zebras—is a left-hand turn down a dead-end road. The trail at its end skirts private property, but eventually opens up above the Pacific with similar terrain to the Estero Bluffs.

A lone fisherman hunches over his pole, with a white bucket at his back, and herons stand on knobby legs in the field behind him. Three white and one great blue move farther away each time we get within 30 yards of them. A hawk soars between the reaching fingers of fog creeping back over the top of us. Abruptly, its wings fold in as it dives behind the cliff toward the sand. It comes back up empty-clawed.

The trail meanders up to San Simeon, depositing walkers on a residential street overlooking a long sandy beach. It’s quiet and windy—just me, the dog, and the waves, which we dodge as we make our way back along the rocky beaches below the bluffs.

Now, I’ve done my 10,000-plus steps and did some peaceful reflecting. My dog’s ready for a nap. It’s definitely pie time.

Rather than go to the restaurant, I opted for the 5-mile drive along Santa Rosa Creek Road to Linn’s Fruit Bin Farmstore. It’s about a 10-minute drive from town through the canyons along the creek bed. I pass the school, a winery, another couple of farmstands, and plenty of pastureland and avocado groves on my way out. 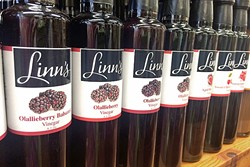 As I pull into the driveway, I see a sign that I don’t quite comprehend until I get a little way into the property. No dogs. It’s more like a plea against bringing canines onto the property—not because Linn’s doesn’t like dogs, but because there are working dogs on the property.

So I back out of the driveway and find a shady spot to park—this isn’t the 90- to 100-degree weekend we just had, mind you, it’s in the high 60s/low 70s and the windows are down. Walking down the driveway, I spot a dog hunkering down in the dirt beneath a trellis of berries. A family is sitting in the shade of the patio, chowing down on some mini pies. Unfortunately, I won’t get to eat pie just yet as I’ve got an animal waiting in the car.

I move as quickly as I can.

Of course, there are samples of preserves, bread and butter pickles, and other snack items and shelves lined with Linn’s oils, vinegars, preserves, and other treats. The olallieberry preserves take my taste buds hostage, so I buy one of those for myself and a sample size for the friends I will be sharing my olallieberry pie with. Bread and butter pickles, check. Avocado oil, check. And pie! Check.

Now, I just need to stave off my hunger for the smoked tri-tip dinner I will be having in about an hour and buy some vanilla bean gelato to go with my pie.

And let me just tell you, it was everything everyone told me it would be.