About five years ago, artist Adrienne Allebe just didn’t know what to draw anymore. After the death of her dad, she simply hit a creative wall.

“I had no idea what to make art of,” Allebe said. “I just took a ruler out and started making lines and then started making simple patterns and building off of that.” 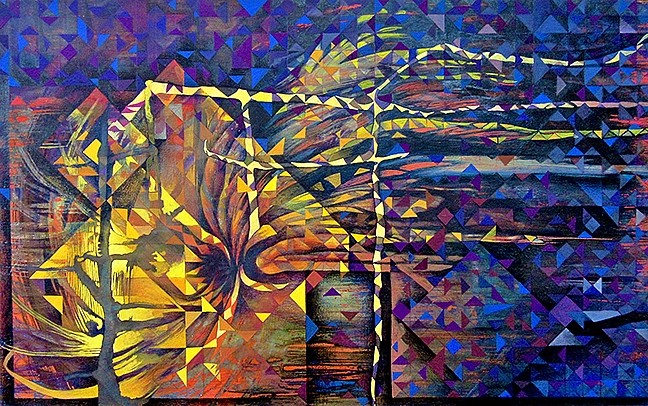 That well of inspiration has yet to run dry for the Cal Poly and Cuesta College arts professor, who will often start off one of her pieces with a shape, symbol, or pattern and add on from there. The end result is an abstract piece that feels like it can really transport you to another world.

Allebe’s collection of abstract, non-representational water color and pencil pieces are currently on display at the Body + Balance Center in San Luis Obispo as part of the Plans and Schemes For An Intergalactic Love Affair exhibit.

Allebe, the daughter of an American Los Angeles Police Department officer and a French preschool teacher, was born in Los Angeles, but grew up in SLO where she was constantly drawing and creating art from the get-go.

“I’ve always done it,” Allebe said. “I would even teach other little kids how to draw Barbie or cartoon characters during recess.”

After going on to study art at UC Santa Barbara and Cal State Long Beach, Allebe eventually made her way back home to the Central Coast. Her current work started with focusing on recognizable figures like an animal and then laying on intricate patterns and details before evolving from there. Today, while the end result might be initially inspired by something that’s visually concrete or based in reality, the final product can leave much to the viewer’s imagination. Even if a piece happens to be simply shapes and colors, Allebe said that viewers of her work almost always see something more.

“I like the idea of making shapes and colors evoke human interaction without showing humans,” Allebe said. “People will still think of something really specific to connect to it. People always form a story of something that happened, and I’m interested in that.”

She begins to create a piece by slowly building meticulous compositions by measuring an elaborate grid, then layering multiple patterns, color gradations, and textural details with paint and colored pencil. Allebe described her creative process as a delicate dance of control and chaos.

Allebe also takes inspiration from journaling words or phrases that she’s drawn to, reading science fiction novels, watching fantasy films like Blade Runner, and even binge watching old episodes of Star Trek on Netflix. She said that “the weird lighting effects that they used and funky animals they created combined with the funky story line,” on the 1960s show spoke to her artistic senses.

Post 9/11, the idea of an apocalypse or the end of the world weighed heavy on her mind and gradually made its way into her thesis for art school. A trip to Thailand spent looking at the temples, with intricate patterns and designs, sparked more ideas as well for future paintings.

“These stories, these fanciful worlds and real characters, at certain points I really related,” Allebe said.

Her current work gives off a dreamy sense of wonder and mystery, with a contrast of darker and lighter colors, and shapes that melt into each other. Allebe said most of the work was created during the beginning phases of new love. Plus her beau is a Tron fan, so the influence of multiple viewings of the fantasy film seeped into her work as well. But Allebe said that the pieces in Plans and Schemes For An Intergalactic Love Affair touch on all the phases of her work and sources of inspiration.

“It’s kind of everything I’ve ever looked at coming together,” Allebe said.

Ryah Cooley is dreaming of a galaxy far, far away at rcooley@newtimesslo.com.