Surveyors of nuclear energy policy witnessed another big week for Diablo Canyon as news hit the wire on Jan. 16 of the Supreme Court's refusal to review a PG&e-appealed decision by the Ninth Circuit Court of Appeals. That June ruling ordered the Nuclear Regulatory Commission (NRC) to reexamine the possible effect of a terrorist strike on the spent uranium storage facility currently under construction behind the plant. Mothers for Peace, the Sierra Club, and former SLO County supervisor Peg Pinard originally brought the lawsuit in 2003 in response to what they viewed as shortfalls in the project's environmental review. 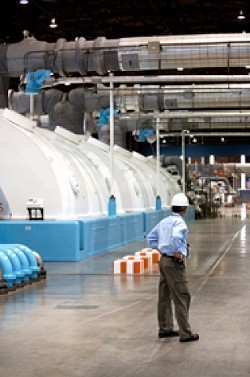 # In addition to closing years of litigation between the Mothers for Peace alliance and PG&e, the Supreme Court denial puts the ball back in the NRC's court. According to the upheld ruling, the utility and any other nuclear-plant-owning outfit looking to store fuel on site can build uranium-harboring dry storage casks but can't legally fill them without studies examining the effect on the environment of a potential terrorist attack. The re-review process will involve more public hearings.

"We're extremely pleased with the result and excited about the nationwide implications of this decision," Mothers for Peace activist Jane Swanson commented.

"We're disappointed that the Supreme Court won't consider this issue, but, moving forward, we're anxious for the NRC to resolve it as soon as possible," said Diablo spokesman Jeff Lewis.

The NRC didn't return phone calls as of press time.

While Washington justices deliberated whether to hear the fuel storage matter, an environmental legal action group from the Los Angeles basin filed a fresh brief with the courts, suing the Coastal Commission for adopting a steam generator replacement project without any mitigation during an agency hearing on Dec. 15. The Coastal Law enforcement Action Network (CLeAN) and its lead attorney David Weinsoff filed the suit Jan. 11 in San Francisco.

Fundamentally, the submitted writ seeks a reexamination of the commission's decision for alleged violations of the California environmental Quality Act (CeQA) and the downing of all existing coastal permits. CLeAN attorneys will soon find themselves in a race against construction timetables, while simultaneously boxing a bureaucratic glacier. By the time Mothers for Peace scored its preliminary win in the Ninth, concrete had already been spilled on the Diablo storage facility.

"Government agencies live in their own legal universe," Weinsoff quipped.

"We started consulting with our lawyers immediately after," said CLeAN project manager Marcia Hanscom. "It was clear from the record that the commission did not do anything to mitigate for the marine life impacts. This is a pretty slam-dunk case, we think."

The official overseeing the organization under legal siege, Coastal Commission Director Peter Douglas, was one of the strongest proponents of forcing stricter terms upon the utility. Commissioners denied his staff proposal to require conservation of more than 9,000 acres the vast majority of PG&e's Pecho Coast property to compensate for the purportedly catastrophic ecological effect of another decade or more of plant operation.

As a California body, the Coastal Commission will be represented by the Attorney General's Office, however representatives at the two agencies provided contradicting information on the state's next step. A press agent for Attorney General Jerry Brown explained that a commission meeting must take place before the lawyers file an opposition. According to Director Douglas, a wealth of possible routes now run forward, including a new mitigation agreement between CLeAN, the commission, and the utility.

"At this point, it depends on what the court says and PG&e," Douglas said. "I think the attorneys for PG&e have a lot of work to do."

Claiming that the proposed swap-out of corroding reactor pieces wouldn't cause any direct harm to the coastal environment, the utility opposed mitigation but offered a 1,200-acre public access easement earlier in December. The commission accepted the project under those terms, as well as an added action to protect nearby Diablo Canyon Creek from excessive draining. As of publication, PG&e officials remained unsure if the energy giant would file an opposition brief alongside the Coastal Commission, as it did with the NRC in the fight over the dry cask storage facility.

"It's important to note that the Coastal Commission decision came after a lot of study and discussion, and it was a 12-0 decision," Diablo Canyon spokesman Jeff Lewis said. "We think that says a lot about the validity of the decision. Staff recommendations are just that recommendations."

South Central Coast commissioner Katcho Achadjian, who voted to approve the project, drew parallels between CLeAN's challenge and the perils of Prop. 90 a defeated Nov. 7 initiative that many officials said would have opened the door to an overwhelming tide of public litigation.

"They were just reconditioning their generators. If they were adding another reactor, that would be a nexus to take property or conserve land," Achadjian said.

At the center of the controversy is Diablo Canyon's titanic once-through cooling system, which some scientists believe causes irreparable harm to local sea life. environmentalists asserted that, simply by extending the lifespan of the plant, the approved maintenance project would further this damage. The staff report suggested the monumental land conservation action after it determined that mitigating for the marine issues directly would require the utility to doctor up to 1,000 acres of sea floor to mimic conditions around the cooling suction. Choosing neither, the regulatory panel instead sided with PG&e.

"It's just a terrible precedent for the commission to set," CLeAN's Hanscom opined.

CLeAN is backed philosophically, if not yet legally, by the Sierra Club and eCOSLO. Both groups sent representatives to the Dec. 15 hearing to argue against accepting PG&e's then-pending easement offer. Due to deadlines tied to legal evocation of CeQA, attorney Weinsoff had 30 days to file the writ of mandate. Any conservation group filing an accompanying suit, Hanscom said, has until Feb. 13 to submit its brief to the court.

Both local Sierra Club chapter director Andrew Christie and eCOSLO director Morgan Rafferty expressed no immediate plans to join in the legal party, but mentioned that they knew of the suit before CLeAN officially filed.

"everybody knows everybody," Christie explained. "Right after the hearing, we contacted CLeAN because we knew they had representatives on it."