The domes of Diablo Canyon’s two nuclear reactors rise above the facility and look out over a scenic view of the Central Coast. The twin domes’ inner workings are complex, mostly a mystery to people living in the towns and cities that benefit from the power generated by the facility.

The issues and science surrounding the plant’s seismic safety are just as complex. The plant sits within a web of overlapping government oversight entities at both the state and federal levels. Throw in citizen watchdog groups, plus activists both for and against Diablo’s continuing operation, and taking a holistic look at the issues surrounding it can get confusing. 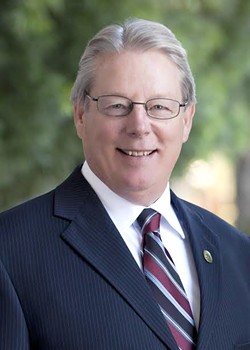 At the heart of the issue is the seismic safety of Diablo Canyon. The plant and its operator, PG&E, are working to satisfy the requirements of AB 1632, penned by Monning’s predecessor, former Senator and Assembly member Sam Blakeslee, and also to satisfy the federal Nuclear Regulatory Commission’s Senior Seismic Hazard Analysis Committee requirements.

“Fukushima was a wake-up call,” Monning said. “We don’t want to look back and say we didn’t take the necessary steps to protect public safety.”

Monning attempted to bring together many of the parties debating over Diablo  on Sept. 25 during a seismic safety town hall meeting at Cuesta College. Co-organized with U.S. Rep. Louis Capps, the event featured a panel of representatives from PG&E, the NRC, the California Geological Survey, and the California Public Utilities Commission, as well as a citizen watchdog group Alliance for Nuclear Responsibility. Every stakeholder made a case to Monning and county supervisors Adam Hill and Bruce Gibson, as well as those in the audience.

At the meeting, each group was able to give a short presentation. PG&E’s presentation was a familiar one for anyone who’d attended one of the many town halls and information sessions held earlier in the year. The company maintained its stance that the plant is seismically safe and touted the technology it used to conduct its studies of the issue.

“Their initial conclusion that they provided back to PG&E is that Diablo is safe,” said Jeral Strickland, director of technical services for PG&E.

Strickland also said the company was confident that the plant could be safely shut down in the event of a rare, “one-in-10,000 year” earthquake, a claim that the NRC’s representative at the meeting appeared to agree with.

But not everyone is satisfied with PG&E’s claims, nor the scientific methods used to support them. The Alliance for Nuclear Responsibility, which bills itself as a ratepayer advocacy group, has long looked at the company’s seismic claims with a critical eye.

David Weisman, who represented the Alliance at the meeting, urged that state regulatory and oversight bodies should play a larger role when it comes to Diablo Canyon’s safety and warned that simply trusting the NRC could come at a steep price for ratepayers.

“Reliance solely on NRC oversight has been costly to our state’s ratepayers. In addition to the historical Diablo failures I mentioned earlier, we have the more recent example of San Onofre, where the NRC’s own inspector general found the NRC staff at fault for lax oversight in administering the steam generator replacement,” Weisman said. “Those approved parts soon failed, causing the permanent shutdown of SONGS [San Onofre Nuclear Generating Station] and leading to the nearly $3.5 billion controversial settlement foisted upon ratepayers.”

Moving forward, at least one of the  state’s oversight bodies will be able to play a more active role in deciding the future of Diablo Canyon, thanks in part to a recent legislative bill co-authored by Monning.

The legislation, which was created in partnership with state Assemblymember Katcho Achadjian (R-San Luis Obispo), extended funding for the SLO County Office of Emergency Service’s oversight of the plant and the life of an independent peer review panel, which was set to end in November of this year.

The CPUC created the panel in 2010 to fulfill the requirements of Blakeslee’s prior legislation. The panel consists of representatives from the California Geological Survey, the Seismic Safety Commission, the Energy Commission, the Office of Energy Services, San Luis Obispo County, and the California Coastal Commission. The members of the panel have kept an eye on PG&E’s studies of potential seismic dangers.

Monning said both the federal and state government had roles to play in assessing the plant’s safety, and he sees the panel as another way to assess the data and research done by PG&E.

“Because of the stakes involved, we need to make sure that all informed eyes have access to that information,” he said.

The bill, which is currently sitting on Gov. Jerry Brown’s desk awaiting his signature, elongates the life of the peer review panel until 2025, when Diablo Canyon’s license to operate is set to expire. Moving forward, the state’s independent peer review panel will also be able to seek out its own independent experts to review the seismic data and research. The new legislation might be a boost for the panel, according to Weisman.

“They have got all the empowerment and the go-ahead that they needed. They can ask for outside experts, and the money to do it,” Monning said. “With this newly extend life, the IPRP [Independent Peer Review Panel] clearly has its work cut out for them. The NRC has failed on occasions to get the issues right, and when they don’t get the issue right we pay through the nose.”

While the Alliance has aggressively questioned PG&E’s methods and conclusions, as well as its commitment to working with the peer review panel, Monning said he believes the company is working to fulfill its duties.

“It seems like they are fully committed, [and] that they’re doing what is required of them,” he said.

Staff Writer Chris McGuinness can be reached at cmcguinness@newtimesslo.com, or on Twitter at @CWMcguinness.