Diamonds, gems, and gold in the rough 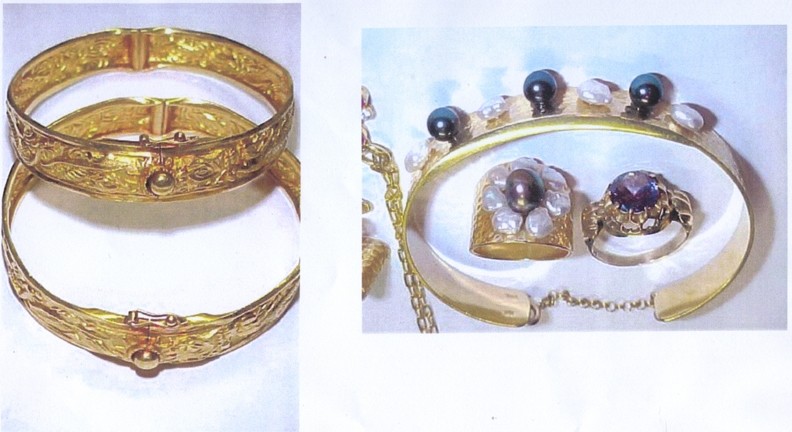 Barbara Schippers walked into her Los Osos home and felt things were amiss—nothing major, maybe a drawer askew or something not quite where she left it.

It was already a tough time for Schippers. She had recently lost her job and totaled her car. On top of that, she was trekking to Fresno every weekend to be with her ill mother. On one of those trips, someone broke into her home—the first time.

After the initial break-in, Schippers filed a police report, but didn’t notice anything missing. The next weekend she left to visit her mother. When she returned, she again noticed that someone had been in her home.

This time, the burglar had been more brazen. Someone had gone to town in Schippers’ ordinarily neat bathroom, unfurling towels and even using the toilet without flushing. And though she isn’t certain, Schippers thinks someone pawed through her fridge and helped themselves to her chocolate milk.

The next weekend, Schippers stayed home. The previous break-ins both happened on the same days of the week, she said, so she dressed herself in black, grabbed a flashlight, and spent the night on her porch, waiting from 3 a.m. until dawn for someone to come walking up the driveway. It was a stupid thing to do, she admits, but she also had her neighbor watching her from his pickup across the street.

“I don’t know what I was thinking,” she said. “I was just pissed. Once is bad; twice is just kind of ballsy.”

No one showed up that night. But the next day, she remembered a stash of jewelry—more than a dozen bracelets, earrings, and necklaces—she kept hidden. She checked. Someone had made off with everything.

She didn’t really wear it much. The pieces were mostly heavy, solid gold and ornate items that had more sentimental value than anything, like the bracelets etched with 17th century dragons, which her friend made before he died of cancer.

Now, six months after the first break-in, Jesse Cornelison is serving a two-year prison sentence in connection with property stolen from Schippers’ home and two others. He pleaded out, accepting a lesser charge of possessing stolen property rather than burglary charges originally brought against him. And Schippers now knows where to find the things taken from her. Actually, she learned what had happened to her jewelry almost immediately after it was taken. If she wants it, the jewelry is hers for the taking—if she’s willing to buy it back.

Schippers called the San Luis Obispo County Sheriff’s Department after realizing her jewelry was gone. That evening, an investigator tracked it all to Hamilton Estate Jewelry in downtown San Luis Obispo.

It might seem Schippers’ problems were over, but, as it would turn out, that’s when the complications began.

Cornelison, a 21-year-old with almost as many charges on his SLO County rap sheet as years under his belt, unloaded piles of stolen jewelry at the store owned by Keith Hamilton. Though Cornelison wasn’t convicted of the theft, he sold multiple items over several visits.

Under state law, second-hand dealers are required to forward paperwork for all such transactions to local law enforcement. There’s an automatic 30-day hold while police check if the property is stolen. In this case, the jewelry raised red flags, which triggered a further 90-day hold.

After the jewelry was discovered to be stolen, and police had found the rightful owners, Hamilton asked Schippers and three other victims to essentially buy the jewelry back for the amount he paid to Cornelison. As of press time, none of the victims had agreed to repurchase their stolen items. Schippers, for example, couldn’t afford to and was told she could go to her insurance or use a credit card. She didn’t want to incur any debt for her own jewelry, though, and her insurance had such a high deductible she would have only saved about $100 in the end. For Schippers, the hold on her jewelry lapsed on Dec. 13, and she feared it would be resold or melted down.

However, on Dec. 10, Deputy District Attorney Matt Kraut—the prosecutor in the Cornelison case—had a subpoena served on Hamilton, requiring him to appear for a scheduled Dec. 16 hearing. He’ll have to bring the jewelry and receipts documenting the transaction, and let the court hash out how to return the property to the victims.

Kraut said he felt it was clear Cornelison was hawking stolen jewelry, but Hamilton denies any such allegations.

“What I’m aiming at is to get [Hamilton] to turn over the property and then have Cornelison be on the hook for the pawn fee,” Kraut said.

Hamilton was reluctant to talk about the case, saying he’d been burned by the press before. And there’s another current case that’s cast doubt, however unfairly, on all local second-hand dealers (All That Glitters employee William Roger McBurney is facing a felony for accepting stolen property). The victims in the case twisted their stories when they went to the Office of the District Attorney, Hamilton alleged.

Hamilton said he’s been a licensed second-hand jeweler for 25 years, and he follows the rules.

“We try to do everything that’s legal, and cooperate with the police to the Nth degree,” he said.

He added that this was an unusual circumstance in itself, and he doesn’t often have people come in search of stolen jewelry. But when he does, he said, he asks them to compensate him for the cost of purchasing the jewelry.

Indeed, there’s nothing preventing a second-hand dealer from charging a fee under the state penal code. A nearly identical case in Oakland posed the same questions as to whether victims are entitled to their hawked property free of charge. Ultimately, the laws on second-hand dealers tend to unravel after stolen property is located.

Still, he added, “It’s like a double slam: You get ripped off and then you have to buy the property back.”