Differing accounts: A woman with epilepsy claims Pismo Beach police were overly aggressive and wrongly arrested her; police claim she was intoxicated and hostile

The question that will most likely need answering in the coming weeks is whether Pismo Beach police appropriately handled an intoxicated woman who had become irate with officers, or whether they were overly aggressive and arrested a woman with epilepsy who called 911 in hope of receiving medical help.

As of press time, New Times was able to confirm several facts about an Oct. 11 incident that resulted in Grover Beach resident Andrea Hansen being arrested and charged with three misdemeanor counts of public intoxication, battery of a peace officer, and resisting arrest. 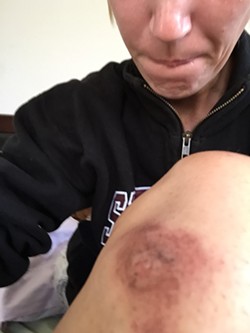 Hansen, who is diagnosed with juvenile myoclonic epilepsy and generalized convulsive seizures, went to a downtown Pismo Beach sports bar on the evening of Oct. 11 to watch a playoff game between the Giants and Cardinals. The game ended at approximately 8:30 p.m., and she began the 15- to 20-minute walk home. During the walk, she said she began to lose consciousness and awoke several times in vulnerable positions on the beach, which led her to the conclusion that she’d had multiple seizures.

Hansen placed a 911 call from her cell phone, which was routed to the California Highway Patrol. Though Hansen couldn’t say for certain where she was, the dispatcher triangulated her location and dispatched officers from the Pismo Beach Police Department.

According to a department incident report, Officer Leslie Stout was dispatched at 11:37 p.m., responding to a call of “an intoxicated female who stated she was having seizures.”

Hansen declined to comment about many specifics of the case on the advice of her attorney, but did tell New Times that she “absolutely was not drinking all day,” as she believed police have characterized her behavior.

She was also surprised by the timeline detailed in the police report.

“That’s a sign of how severe my seizures were and how long I had lost consciousness if that 11:30 time is actually correct,” Hansen told New Times. “That really is truly scary.”

From that point on, each side tells a very different story. Hansen began a campaign on the website GoFundMe to raise funds for her legal defense (her attorney, David Vogel, declined to comment). According to the narrative of her GoFundMe page, Hansen alleges that the officers harassed her, denied appropriate medical attention, and were overly aggressive when they eventually arrested her.

“I didn’t understand why there were four cop cars, no medics, and I was never told why I was being arrested,” she wrote online. “Battery against a peace officer. This is laughable. It’s a misdemeanor, which means I didn’t touch a single police officer, it was only because I was kicking my legs. Go figure—I was having seizures, we jerk around under stress!”

Quotes from her have since appeared in several online articles, but Hansen said she wanted to clarify that she hadn’t previously spoken to the press, adding that a photo depicting her with a swollen eye was in fact taken after one of her past seizures, not her recent arrest.

If convicted, Hansen could face as many as 2 1/2 years in county jail. She’s pleaded not guilty to all charges.

Hansen recorded the incident, as did the police, but neither side has released a video. Pismo Beach Cmdr. Mark Miller said he believed the video will support the department’s actions when the case is adjudicated, and he was happy with how the officers handled the call.

“The officers treated the person in utmost respect, patience, and empathy,” he said.

Hansen provided New Times a short clip to help confirm part of her account of the events. In the clip, a male voice—whom Hansen identified as one of the officers—can be heard.

“If you’d stop being so hostile we could probably help you out medically,” the voice says.

According to Officer Stout’s report, when he arrived Hansen immediately began yelling at him and was aggressive throughout her interactions with him and other officers. She reportedly yelled at Stout “How are you here to help me? Oh look at this police show. How are you here to fucking help me?” Stout wrote that she yelled at an officer “to put his flashlight down because she had epilepsy” and the officer advised her “his light was not flashing.”

Hansen wrote on GoFundMe that she was confused and asked the officer to “stop” shining his light in her eyes, and he responded, “You don’t tell me what to do.”

According to the police report, Hansen then attempted to stand up and was ordered to sit down, but she refused. Hansen was arrested after Stout “determined she was not able to care for her own safety or that of others.” Hansen claims that she was injured during the arrest. Medical staff at the scene couldn’t perform a medical clearance on site, and Hansen was transferred to Sierra Vista. While in the backseat of a police car, Stout wrote that he was “attempting to gather the items from her pockets when she lifted her left leg and kicked me, striking the lower portion of my leg.”

Hansen released a letter from a UCSF Medical Center neurologist after the arrest. The neurologist wrote that “it is not unusual for individuals after an epileptic seizure to be confused and manifest reactive aggression for many minutes, even hours after seizures. … The reactive aggression that can occur may consist of thrashing, kicking, or hitting motions, especially if the patient is being physically restrained during this post-seizure confusional period.”

At Sierra Vista, Hansen was allegedly uncooperative and hostile, and officers placed her in leg restraints. Hansen was medically cleared, transferred to the San Luis Obispo County Jail, and booked at 2:02 a.m. the following morning. She further alleges that she was mistreated in jail.

“When I started going into convulsions in the jail cell from lack of medication, I was kicked in the near the head by a police officer, because ‘i fake seizures,’ [sic]” she wrote on GoFundMe.

Sheriff Ian Parkinson provided the following statement via Sheriff's Office Spokesman Tony Cipolla: “The Sheriff's Office has received no allegation of misconduct as it pertains to this alleged incident. Even so, we have taken it upon ourselves to begin an investigation into the matter. We will review all data and information and then make our determination.”

Hansen’s case is scheduled for a Nov. 20 pre-trial conference.