Difficult discussions: Though rumors cloud conversations about the local Black Lives Matter movement, some protesters reach out for understanding 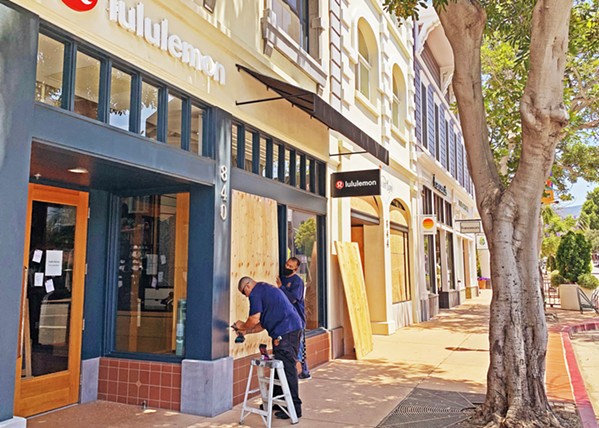 At the time, Rose Steen said she and others participating in local protests against police brutality in solidarity with the national Black Lives Matter movement felt betrayed by some downtown business owners.

At the request of city staff, the Downtown SLO Association sent out a memo on June 3 to business owners recommending they take precautionary measures in anticipation of a protest drawing large crowds. Three days earlier, a local protest ended after law enforcement deployed pepper ball rounds and tear gas into a crowd, while two storefront windows were broken by BB gun bullets in an unrelated incident later that evening. Several downtown businesses heeded the June 3 warning and boarded up their windows.

Steen told New Times that a group of people, including herself, took note of businesses that had boarded up their windows that day while they were marching through downtown.

"It just really felt like they had turned their backs on a community that was asking for help and pleading for help," Steen said.

Determined to start a conversation, Steen and several others called every downtown business that had boarded their windows.

The dialogue that followed led to rumors and misunderstandings that continue to plague the ongoing protests, leaving some with feelings of divisiveness. New Times spoke with individuals on both sides of the issue to provide a space for clarity and perspective on what happened.

Kayla King, who's worked downtown for years, helped reach out to businesses and landlords in June. King told New Times she felt like part of the community.

"I think the impetus for me to get involved was kind of feeling a breach of especially downtown San Luis Obispo's strong sense of community trust," King said.

King and Steen said businesses gave several reasons for boarding up: the association's memo, landlords requiring that businesses board up, and a rumor that people were coming from outside of the area specifically to cause damage.

"We talked to other people who said, 'My neighbor told me there's going to be violent mobs in downtown SLO tonight' or on social media. Someone said, 'They're busing people in from Oakland.' It was just kind of this unsubstantiated dog-whistle type rumor that spread like wildfire," King said.

New Times reached out to several business owners. Erica Hamilton, co-owner of Blackwater, was the only one who agreed to speak on the record. Hamilton said, at the time, small businesses were worried about COVID-19 closures that had led to an estimated 75 percent decline in revenue. They started to rely on one another and often communicated through group text messages.

Hamilton said those group texts are where she read about the rumors. Hamilton and her mother, the other Blackwater co-owner, were both concerned that people were going to take advantage of the moment.

"That might be the way we felt, but we were constantly being bombarded by everyone else saying, 'I'm going to close,' or, 'I'm going to board up because I can't afford to lose anything else.' So you're kind of in this internal struggle between how you feel and what externally is going on around you," she said.

Hamilton and her mother decided to cover their windows with butcher paper, which didn't sit well with them. The following day they took the paper down, wrote the names of the past six months of police brutality victims on it, and put it back up.

When Hamilton was approached by the protest group, she apologized for the butcher paper and was ready to hear their concerns and support the movement.

King said other business representatives who spoke to the group were hesitant to position themselves one way or another.

"Part of the reason we wanted to have the conversation is that we felt like by boarding up, that was a position taken," King said.

The group wanted to understand the action because businesses didn't board up for protests such as The Women's March, Justice for Andrew Holland, Families Belong Together, and more recently reopen SLO, anti-lockdown, and Blue Lives Matter.

The goal of the conversations was not to blame business owners, but to come to a mutual understanding of how both sides felt about what happened.

"Our other goal was to spread awareness of the actual intentions of the Black Lives Matter movement, which is not rioting and looting, but, you know, it's to open up uncomfortable conversations and to face unfortunate realities that even in San Luis Obispo we have to reckon with," King said.

The group left voicemails with the businesses that didn't pick up the phone and at the end of each conversation, they handed businesses a thank you letter.

New Times obtained a copy of the letter, which summarized the group's reasons to push for an open dialogue and what they understood had occurred, urged businesses to "actively listen" to the message behind the movement for dialogue, and expressed appreciation to the businesses for listening.

In the days that followed, a rumor started circulating downtown claiming that the group had demanded money from local businesses for local organizations such as R.A.C.E. Matters SLO or Black Lives Matter as a consequence of boarding up.

Ambiance store owner Kannyn January met with a group on June 13 to talk about why her shop boarded up, but the meeting went sour for some and put R.A.C.E. Matters founder Courtney Haile on the spot.

January was initially scheduled to meet with four people—Tianna Arata; her mother, Michelle Arata; and Cal Poly football players Jalen Hamler and Xavier Moore—in the Mission Plaza. However, more people attended the meeting, including those who supported January as well as a football booster sponsor, Haile, and Haile's significant other.

January declined to comment on the event. Tricia Hamachai, who was also at the meeting, told New Times that January asked her and Abrianna Torres (now running for SLO City Council) to join the meeting to provide support.

"And to be able to help mediate because tensions were so high that we were just kind of in the middle of, you know, support the businesses but also support youth, support our community," Hamachai said.

Hamler and Moore said they intended to let January know that boarding up was offensive to them and the local movement. The conversation ended on a positive note for January but not for Torres.

"I was told I grew up here in San Luis Obispo therefore I don't know struggle: Black isn't the color of your skin, it's a culture, and I ain't Black," Torres told New Times.

Hamler denied the claim that he or anyone else told Torres she wasn't Black.

"Basically what was said was that all Black people don't fight for Black people. I don't know why she was trying to wear that shoe, but it didn't fit," Hamler said.

Moore said the conversation took a turn after Torres said that "white privilege didn't exist" and that the athletes were acting like victims even though they have privilege because they're Cal Poly football players.

"You can't say that because we come from two different lives. I'm from Los Angeles. I grew up on floors. My privilege was not a choice, I didn't choose my circumstances. So yeah, we're on different sides of the spectrum. She can't see my perspective, and I can't see hers," Hamler said.

Torres said the football players misunderstood her. She told them that they were pointing fingers and pointing out privilege but failed to see their privilege of being in San Luis Obispo, getting an education at Cal Poly, and playing football.

"I said the difference between you and I is you're looking to point blame, and I'm looking at opportunities that I have," Torres said.

Hamachai said she was disappointed in the dialogue and even more frustrated that the co-founder of R.A.C.E. Matters SLO didn't intervene or mediate the conversation.

So she wrote a letter to the city of SLO—which has worked with R.A.C.E. Matters—about the local organization, which Hamachai felt wasn't being inclusive.

"I spoke out at the City Council meeting because I said how can we have R.A.C.E. Matters SLO advising the city when I was just part of a conversation where it was obvious that not all Black lives matter to them," she said.

Haile provided New Times with a statement about the incident.

"At the last-minute request of friends who I ran into downtown, I attended a meeting in Mission Plaza where a spirited debate ensued. Multiple voices were raised around multiple arguments, and I did not contribute mine, as I was asked to observe and was not a part of the central conflict," the statement read. "My role is never to control or micromanage other organizers. I can tell you unequivocally that no donations were solicited, much less demanded, during this meeting. With a heightened profile in recent months, I now realize I am inextricably linked to R.A.C.E. Matters and cannot drop in on meetings without intention."

The actions of businesses and the dialogue that followed nearly four months ago are now argument points at protests and counterprotests. Torres said she feels that there's a lot of tension and a divide in the San Luis Obispo community. 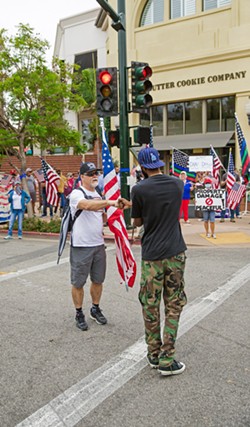 The local Black Lives Matter movement has been very emotional and overwhelming, Torres said. However, she added that she's participated in meaningful conversations that are a direct result of what's occurred in the community.

"That's what we want. We want to continue talking and making sure that all feel welcome and cared for and considered in the decisions that we're making," she said.

The community needs leaders who can lead open dialogue with stability, empathy, and are ready to hear what others have to say, Torres said.

"That doesn't mean agree with what others are going to say, but we can't just shut them down. I feel like that's what's going on a lot. Someone says something that maybe isn't in line with what someone believes, and all of a sudden we're attacking that person for every other reason and we get off track of what our goal is," she said.

As Torres continues with her campaign for a seat on the SLO City Council, she said one of her priorities is leadership in diversity and inclusion. However, she believes the community is neglecting a lot of other issues right now, such as economic vitality, youth who are distance learning, and the impacts of COVID-19 on mental health.

She said she doesn't want previous priorities to get lost in the noise because she feels "race relations have been blown out of proportion at the local level."

"A lot of people, I feel, are taking national issues and projecting them on San Luis Obispo. We have to look at the statistics and data from San Luis Obispo," Torres said.

At the end of the day, Torres said, she just wants the best for everyone in the community.

"I have stepped up because I am a community member who has not felt heard, and I look around and there are a lot of others like me, so I'm doing what I can," she said. "This is an opportunity for me to be a part of the solution." Δ