In 2004, Alan Iftiniuk faced a tall task coming in as the new CEO of French Hospital in San Luis Obispo: to revive an old, decrepit hospital that was on the verge of bankruptcy.

"It was a very broken hospital," Iftiniuk recalled of French at the time of his arrival. "There was even consideration of tearing it down and putting condominiums in."

With the community's backing and enough capital investment from its new owner, San Francisco-based Dignity Health, French Hospital emerged out of those rough years. 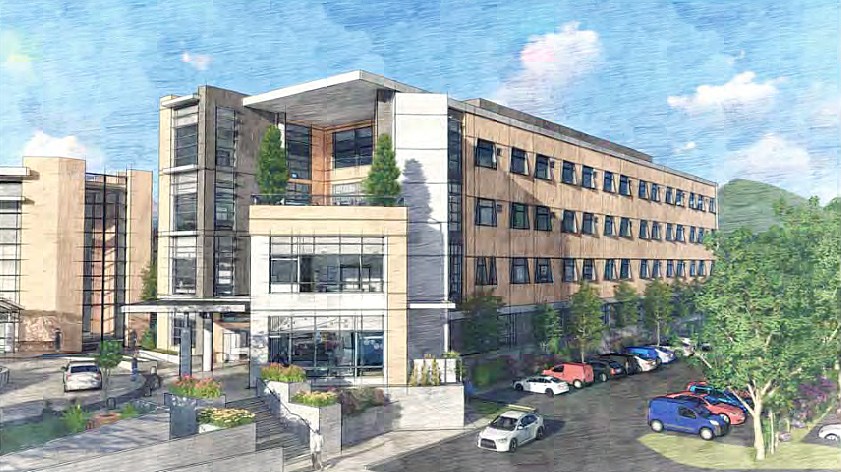 Now, 15 years later, Dignity and Iftiniuk are gearing up for the hospital's most ambitious expansion project since 1972, when Dr. Edison French moved it from the old San Luis Sanitarium on Marsh Street to its current location on Johnson Avenue.

The $125 million expansion would more than double the size of the current facility—adding a 90,000-square-foot, four-story medical tower with 82 new patient rooms; a neonatal intensive care unit (NICU); a chapel; and a four-story parking structure with a helipad.

With the hospital's emergency room already under construction—getting a $17 million upgrade of its own—the next few years are going to be a busy (and potentially disruptive) time for French and its neighbors, as it grows into the largest hospital in the county.

"This hospital was built in 1972, a very different model in terms of what hospitals were expected to do and what they were capable of doing," Iftiniuk explained in an interview in his executive office, with active ER construction visible from his fourth-floor window. "It needed to be updated."

Growth has been in French Hospital's plans since 1993, when a newly adopted master plan envisioned the addition of four new buildings over time. The plan's since been revised twice, in 2013 and 2016, as Dignity Health honed in on the blueprint for French's expansion.

Iftiniuk told New Times that the planning process involved an exhaustive analysis of the community's needs—projected decades into the future—and an investigation into what's at the cutting edge of health care. The larger vision is to bring "the best of the best" of the industry to the Central Coast, he said, and to "re-imagine" the hospital experience for patients and their families.

"There's a willingness to go for the best," Iftiniuk said. "Ultimately, what we're going to be able to provide is the same kind of care, and in many cases even better care, than you'd find in a large urban setting like San Francisco, LA, Chicago, and New York. ... How do you take the best of the best of what's available in health care around the world and bring it here? That's what we're doing."

Dignity Health—which is the largest nonprofit hospital chain in the country—has invested $95 million into the expansion project and asked the community to contribute the remaining $30 million. Its largest contribution yet is a $4.2 million donation from North County residents Stan and Barbara Clark.

"This is a very generous community," Iftiniuk said. "The hospital survived because this community wants this hospital to survive."

The hospital expansion is planned in two phases: The parking garage and helipad will come first, with construction expected to start in spring of 2020. The medical tower comes second, with construction starting in fall of 2020. Its grand opening is scheduled for mid-2022.

But before either phase can break ground, Dignity has to complete the city of SLO's permit approval process.

As part of the review, residents of adjacent neighborhoods have lodged concerns about how the expansion will impact their lives near the hospital.

In one case, neighborhood objections resulted in a substantial redesign of the project. Its initial layout positioned the new parking garage on Ella Street, which would have moved the main entrance to the hospital from Johnson Avenue to the much less-trafficked Ella Street.

But in-person meetings between the residents and hospital administrators birthed a new plan. The parking garage was moved to the rear of the hospital, up against the Amtrak railroad tracks, which keeps Johnson Avenue as the main entrance for traffic.

"It made sense. ... It actually makes it more convenient," Iftiniuk said of the redesign. "We acted on their good ideas, so kudos to them."

"There was applause," recalled Ella Street resident Bob Canepa of the neighbors' reaction to the new plan. "That's a win-win situation. They were pretty responsive, and I was impressed and in awe that they listened."

Residential concerns still linger over how the expansion will impact traffic and noise, particularly, in the area. The city, in response, has asked the hospital to produce new traffic and noise reports for the project. The expansion still needs the city Planning Commission's approval to get final permits.

Neighbors are especially apprehensive about the helipad, which is expected to take in four choppers per month for emergency transports.

"There is absolutely no possible way to fly a helicopter over the city and land in a residential neighborhood without a terrible lot of noise," wrote residents Jason and Jennifer Holyfield in a Sept. 16 letter to the city's Architectural Review Commission. "There is no good reason to destroy the peace of so many people in the surrounding neighborhoods in order for [Dignity Health] to make more money."

Iftiniuk countered that, as the hospital nears its 50th birthday, the venture is the right move at the right time.

"What I am paid to do and am accountable to do is make sure no matter what happens, this facility can meet the now and future needs of the community," he said. Δ