"It's always been on my bucket list to complete a feature film," Dina Mande, the documentarian behind Tin City, told New Times. Mande has been directing and producing commercials, music videos, and short films since the '90s, but Tin City is her first feature-length film.

The documentary, which premieres at this month's SLO International Film Festival, includes interviews with the various winemakers, brewers, distillers, and spirit makers who inhabit the industrial playground known as Tin City in Paso Robles. 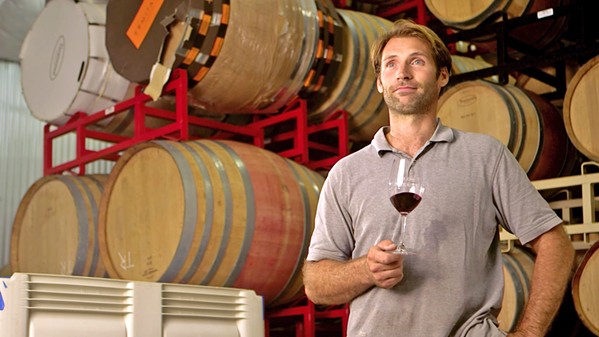 Mande considers the film, which took two years to plan, shoot, and edit, a true labor of love and a testament to her adoration of the Paso Robles wine community. The filmmaker's affinity for wine culture started at an early age, though, and more than 200 miles away, in Napa Valley.

"All of the kids I went to school with, their families were winemakers," Mande said. "My dad was a realtor, so that wasn't as much fun. But I just loved being around wine culture."

After living in Hollywood for many years, working on advertising campaigns for Warner Bros., Paramount, Disney, Sony, Fox, HBO, and other major studios and networks, Mande moved to the Central Coast in 2009. She then started her own production company, Juice Media, specializing in producing content for wine, food, and travel brands.

"Coming to Paso Robles 10 years ago, it felt like a new frontier," Mande said. "I was really attracted to the attitude and vibe and energy that existed here in the Paso Robles wine community."

Over the last decade, Mande has become known locally for her work on the web series Paso Wine Man and California Dream Eater. During the summer of 2016, Mande was itching to test out her newly acquired Canon C300 Mark II camera, but outside the boundaries of her regular workflow. What began as a quick, impromptu experiment soon became the kicking-off point for Tin City.

"I told my team, let's go down to Tin City and we'll just do a couple interviews and make a three-minute documentary," she said. "I started hearing these amazing stories. It turned into a feature film because there's just so much there. It was just so fascinating to hear how everyone got started."

In her effort to capture the hearts and minds behind Tin City, Mande takes viewers beyond the comfort of average tasting room banter, glimpsing deeper into the lives of both the upstarts and the industry veterans who are working within the complex.

The film explores the diverse backgrounds of its key players—from those bred into the industry, to late bloomers. Guillaume Fabre, owner and winemaker at Clos Solene, for example, was born in France and was pretty much destined to take over his father's wine business someday. Instead, he moved to California to start his own. Meanwhile, Jeff Strekas, associate winemaker of Onx Wines, was an engineer living on the East Coast before discovering his passion for wine, prompting him to quit his job, move West, and seek a second career as a winemaker.

Tiny City also features in-depth interviews with Vailia From, owner and winemaker of Desparada Wines; Andrew Jones, co-owner of Tin City Cider; Jason Carvalho, co-owner of BarrelHouse Brewing Co; among many others. Mike English, owner and developer of the Tin City complex, also speaks about his vision for Tin City and his goal to create a close-knit community rather than a run-of-the-mill industrial park. His segment is lovingly titled, "The Landlord."

"It's pretty common in the documentary world to all of a sudden realize that it's broader and way more involved than what you originally thought," Mande said. "What ended up happening is very similar to what ends up happening in life. You start out going down one path, and before you know it, you are discovering something so different than what you expected. And that's what happened to me with this film." Δ

Calendar Editor Caleb Wiseblood can be reached at cwiseblood@newtimesslo.com.