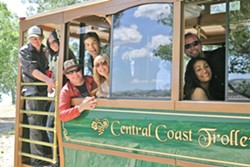 It’s Sunday, May 29, and I’m on the Central Coast Trolley with 11 friends, heading for Paso Robles for a day of wine tasting. It’s a celebration for my friend Tamara’s 25th birthday, and I know it’s going to be a long ride when my buddy Chad yells out, “Take us to the Charles Shaw vineyard!” Then, about five more minutes into the trip, “I have to pee.”

Even though we’re going to be sampling wine all day, Tamara and her mom Cheri have stocked the trolley with enough drinks to wash a Shetland pony.

Keith, Cheri’s boyfriend, asks her if she wants a ham-and-cheese wrap and a bottle of water.

“I can have food and water tomorrow!” she says.

I see Pam, our pilot, and Joyce, the navigator, looking wearily back from the front. This ain’t their first rodeo, but we’re getting pretty boisterous and we haven’t even made our first stop yet: Pear Valley.

Tamara’s boyfriend David is swirling his glass and explaining about the “legs” of the wine and how it helps determine the wine’s quality. Unconvinced, Rakesha asks the woman pouring us wine, and she explains, “It can be affected by the quality of the glass, the cleanliness of the glass, or the alcohol content.”

“Did you hear that?” asks Rakesha.

Then my girlfriend Anna says she’s sorry she didn’t wear a white shirt, because she could keep track of what she drank.

“This stain’s Merlot,” she says.

“Can I have an ice cube and a straw?” asks Chad.

We’re back on the trolley heading to Sculpterra, and navigator Pam is asking us if we want a Sharpie to mark our wine purchases, and Chad says, “I need one to write my name in my underpants. It’s going to be one of those days.”

“Want me to do it?” volunteers Pam, who’s clearly a professional drunk wrangler.

Soon we’re off on some bouncy back dirt road, and Chad yells, “Where are we going? You’re going to harvest my kidneys, aren’t you?”

Then we’re soaking in the amazing sculpture of John Jagger and sampling Sculpterra wines while Steve Key’s Songwriters at Play singer-songwriter showcase gets started in the barrel room.

Then we’re back on the trolley heading to Still Water. Cheri’s boss Paul Hoover—an insurance man—owns it, so he treats us like royalty, even taking us into his cellar for a barrel tasting.

“Hey, does this wine tasting come with a happy ending?” asks Chad.

When we get back on the bus, David drops Cheri’s Still Water memento wine glass into the ice chest, where it shatters into a million little pieces, and we still have one more winery to go!

Anna and I are muttering about how four wineries are one too many as we pull into Pomar Junction, a rustic little winery that I don’t remember at all.

As we’re departing Paso, a bunch of us lean out the window to yell “woo hoo” to a couple of kids on bikes. 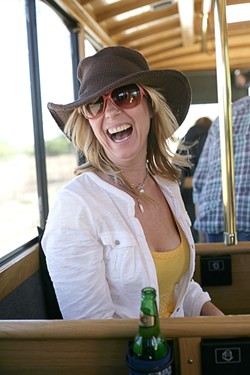 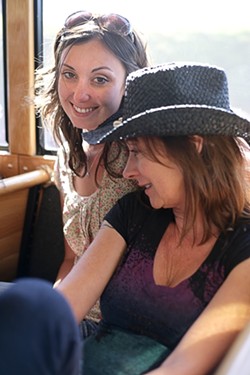 “Woo hoo! We went wine tasting and you didn’t!” I join in.

“Wish you were me!” yells David.

I’m pretty sure he won’t be yelling that tomorrow morning.