If you’re like me, when your friends become more successful than you, you start to hate them, which is why I’m seething inside when my fiancée Anna and I go to dinner with My Generation! writer David Vienna and his wife Larissa Collins.

Not only has David written the new show at the SLO Little Theatre (tickets at slolittletheatre.org) and last year’s popular The Alan Freed Story, he also found out the film he wrote, More Than Stars, has been accepted into the SLO International Film Festival to be screened Sunday, March 11, at 11 a.m. in Downtown Centre (tickets at slofilmfest.org). Throw in the facts that since leaving New Times (he was arts editor several years back) he’s gone on to write for reality shows such as ESPN’s American Dragster and HGTV’s Good Buy/Bad Buy, he has an extremely popular blog called The Daddy Complex, he’s written a graphic novel, and he just got a literary agent for whom he’s writing his first novel, and you can see how he’s become increasingly easy to hate.

It’s Saturday, Feb. 18, and the four of us are eating truffle-infused popcorn, sipping cocktails, and perusing the Sidecar menu when I spring on him that since current Arts Editor Anna Weltner is reviewing My Generation! I now have to do my article on him instead. 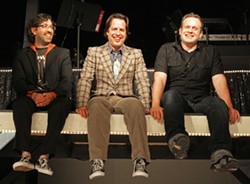 “Geez, maybe I should have shaved,” he says.

“I get photo approval,” Larissa adds.

David and I, now locked in competition, both decide to order the seared Kurobuta pork tenderloin with vanilla sarsaparilla reduction, served with mixed quinoa timbale and caramelized baby bok choy. God, I love this restaurant!

We’re eating the Brussels sprout appetizer, which is to die for, when David starts telling us how when he and Larissa were first dating, she’d frequently prepare Brussels sprouts when having him over for dinner.

“Sometimes I would talk about the subtlety of the way she prepared them,” recalls David, who dutifully ate plates of the things over their somewhat long courtship. He waited until after they were married to tell Larissa the awful truth: He hates Brussels sprouts. Loathes them!

“I think I’ve had them twice since we got married almost 10 years ago,” Larissa laments.

“I was out of town both times,” David says, “but these are pretty good.”

“You could sprinkle that on a plate of cardboard and tinfoil and I’d eat it!” I say.

David’s blog about raising his and Larissa’s twin boys—Boone and Wyatt—was recently voted the fourth funniest dad blog in the world. He reminds me to be sure to tell readers the address is thedaddycomplex.com.

Olympus cameras’ Pen Ready Project liked his blog’s photos so much that they gave him a camera and have been featuring his work on their website penready.com. Knott’s Berry Farm recently invited him and some other parent bloggers to visit the park for free with their families.

“We got to meet Snoopy,” marvels David, whose expectations seem so low you could slide them under a closed door.

His graphic novel is based on his father-in-law’s music. Larissa is the daughter of ’60s rockabilly star Larry Collins of the Collins Kids, and David describes the book as something akin to a “’70s speedsploitation film but with lots of heart.”

He’s also at work on another screenplay, this one about the mother of the Collins Kids, Hazel Collins, in a story that also chronicles the Kids’ rise to stardom.

“It’s like The Grapes of Wrath meets Walk the Line,” Larissa adds.

“Are you going to get Joaquin Phoenix to play Larry?” I ask.

“We’re in talks with him, but we can’t use his real name,” Larissa jokes.

“I’ll say you’re in talks with an actor whose name rhymes with Caulking Kleenex.”

Soon our talk goes to the show we’re about to see, David’s My Generation!

“The reason I was able to do this show was because of the success of last year’s The Alan Freed Story,” explains David, who’s once again teamed with director Kevin Harris and choreographer Drew Silvaggio.

I have to admit it: David’s show is terrific—emotionally resonate, engaging, and filled with great songs, a talented cast, and some terrific dancing. David uses our own emotional connections to the decade to deepen the experience, reminding us of the assassinations of MLK and the Kennedys, the space race, race riots, women’s lib, and Woodstock. It’s downright cruel to manipulate our emotions like this, but David is heartless like that.

During intermission, Anna says to David, “I’m tearing up in there.”

“Yeah, thanks for making us cry, David,” I add.

After the show, the four of us gather with Kevin, Drew, and cast member Suzy Newman for some post-show drinks on the SLO Little Theatre stage. Larissa art directs my photo session as I ask the trio how they managed to pull this all off.

“I just try to think of what a smart person would do, and I do that,” says Drew, before he complains to Kevin about making jazz hands in front of his crotch. “You just totally did jazz hands in from of my balls!”

David mentions how he worked closely with Kevin on the project, frequently meeting late at night at the theater to work out the details.

“After we did The Alan Freed Story, we got more comfortable with each other, and this one was much more of a collaboration,” David says. “I think it paid off. I feel incredibly blessed.”

Soon wine is spilled, Drew leads Kevin and the ladies in some dance routines, and David, who’s been droning on and on about his “process” and stuff about his connection to the “local art scene,” says, “Are you writing down all this stuff I’m saying? I know how you work. You get lazy and just make up a bunch of stuff later to fill your story out. I know you.”

God, I hate this man!