View a slideshow of Glen Starkey's trip to Dino Caves.

Coastal fog enshrouds Shell Beach as my wife and I—filled with chorizo and eggs from Zorro’s Café and Cantina, naturally—make our way to Dinosaur Caves Park. It’s around 10 a.m. on Saturday, Aug. 13, and kids are playing on the playground as their parents watch. Across the green expanse of lawn, a group of people sets up for a wedding while a guy mans a big black Santa Maria-style barbecue grill. 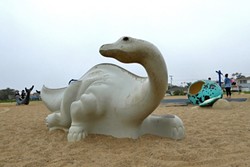 I take a low-angle photo of a concrete Brontosaurus on the playground and tell Anna how in 1948 when this area was an amusement park, then-owner, H. Douglas Brown, started constructing a huge concrete Brontosaurus to draw attention to the place, but neighbors’ objections led him to abandon the project, and his concrete dinosaur stood headless for more than a decade before it was finally removed around 1960. Anna told me it looked like I was trying to take clandestine photos of children on the playground, so we walk through the park, over to the Margo Dodd gazebo where over the cliff we see a large group of kayakers navigating through the kelp on a guided tour of the watery caves below, and finally we make our way over to the staircase leading down to the rocky beach at the base of the bluffs.

Pelicans preen themselves on the inaccessible knolls that rise out of the Pacific, a few of them occasionally wheeling through the air above us as they come in for a landing. The white cliffs and taupe pebbly beach turn a brilliant green where algae and seaweed form at the water’s edge. The cold, clear waters are perfect for divers, and we see a handful of wetsuit-clad snorkelers swimming around, peering into the depths. It’s fairly shallow near the shore, which should keep the divers safe from great white sharks, but boy do their black suits make them look like delicious seals. 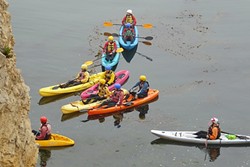 We walk along the beach, peering into some of the small caves, most filled with water. The big caves are really only accessible from the sea. During its amusement park days, the series of caves was billed as “The Caverns of Mystery,” which for a fee you could enter by going through a door in the concrete dinosaur’s belly. Brown, who also owned a lapidary shop, decorated the tunnel that led through the dinosaur with fake gemstones for atmosphere. The biggest cave collapsed in the early ’70s.

Lots of developers tried to build hotels on the site, but none ever became reality, and in 1992, the city of Pismo Beach bought the site for $1.6 million, eventually developing it into the park it is today. Over the years, lots of Chumash artifacts were unearthed on the site. Its estimated that the Chumash occupied the area for more than 10,000 years before white men came along to build missions, amusement parks, and headless dinosaurs. 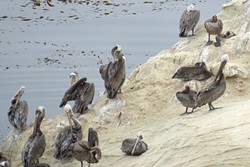 I try to imagine the ancient native people fishing, grinding meal in stone indentations, and living off the fat of the land. It must have seemed like paradise, and to be honest, it still does. The big difference is there’s an 88-step staircase leading up the steep bluff, and instead of eating our fill of ground acorn paste and abalone, we got to dine at Zorro’s.