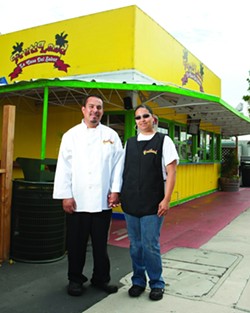 Someone I know casually at my gym was passing by and mentioned that I should try the Mexican cuisine at FrutiLand La Casa Del Sabor in Arroyo Grande. I’m truly sorry that I forgot who it was because I’ve wanted to tell my new friend: thank you so much! This little Mexican eatery turned out to be exactly what I’ve been searching for, for many years. Admittedly, the name sounded silly but only because I don’t speak Spanish and didn’t know that La Casa Del Sabor means “the house of flavor.” Naturally, I became curious and the next day I drove over for lunch—that’s how I roll.

At the first taste of those fragrant chicken tacos served at FrutiLand La Casa Del Sabor, I became ecstatic—this is authentic Mexican cuisine! Admittedly, it looks like a roadside stand serving fast food and there are only a few small patio tables on each side of the bright yellow building. I remember approaching FrutiLand warily, unsure if I wanted to order food from the take-out window. It was a quiet Tuesday and I had arrived late for lunch so the lack of customers didn’t deter me.

Chef Jose Rojas and his wife and partner Grissel (I learned their names after the third visit) were busily prepping foods for dinner service. That gave me the opportunity to steal some looks into the kitchen, which was impressively clean and tidy. When Jose came up to take my order I started with the simplest taste test: I ordered two tacos with grilled chicken, bell peppers, and onions ($8.50).

“Do you want mild or hot salsa?” Jose asked, but seeing my hesitation advised: “You want mild.” My first surprise: This is not fast food. Either Jose or Grissel cooks your food to order and that takes longer. Secondly, they don’t take your money until they hand over your order. Later, I wished I had paid upon ordering to get it home faster. The generously portioned tacos are served on locally-made, fresh blue corn tortillas, with housemade green salsa, queso fresco, and cilantro. The delicious aromas of those wrapped tacos taunted me during the five-minute drive home. I raced inside to devour them and left not a morsel behind—it became an addiction.

Two days later I was back for more with my husband Dan so we could order many other foods to taste test. Dan ordered the three fish (tilapia) tacos ($8.95) with fruit salsa. I asked for two huaraches, one beef, and one chicken ($7.49 each). Jose’s eyes widened a bit, then he insisted: “No, no, that’s too much food for you.” Talk about impressive, I’ve been in upscale restaurants where less honest servers didn’t warn us we had ordered way too much food.

“I never let my customers over-order, we serve big portions and I wouldn’t want them to waste their money,” said Jose. During three visits I never found anything disappointing. I didn’t care for the fish tacos as much as Dan did because the salsa was sweet (naturally) and I prefer savory. Their delicious, freshly-cooked cuisine made me love this restaurant, and after interviewing Jose I had even more respect for what he and Grissel have accomplished.

The Rojas offer a very different menu that features an array of irresistible dishes, every one of them layered in flavor and texture. Most of Jose’s original dishes aren’t commonly found in taquerias in California, and he won’t make most of the foods those eateries serve, like guacamole, enchiladas, or burritos.

“I’m from Mexico City,” Jose noted after my third lunch visit when I finally handed the chef my card. “We don’t make guacamole. We prefer adding sliced avocado to our foods.” The name FrutiLand refers to their interesting fruit-based drinks, fish tacos with pineapple salsa, fruit desserts, and other Mexican delicacies that can’t be found anywhere else within a short drive from SLO.

“I cook like I’m cooking for me. If I don’t eat it, it’s not good enough,” Jose explained. “I started cooking when I was 7 years old in my home in Mexico City.” Since it’s not considered macho for Mexican men to work in the kitchen, his uncle derided him. “I decided I would come to America for the opportunity to do what I want. This  is what I love and what I like. All of my recipes are in my head.”

The religious couple met in junior high, became best friends, and eventually got married in their church. Celebrating 11 years with their three children—Josh, Michael, and Kelly—they hope to teach them their good work ethic. “I wanted to show my kids I didn’t need parents or anybody else to do what I wanted with my life. I tell them if they’re strong and work hard they can be anything they want”

The Rojas make nearly everything from scratch, except mayonnaise and ice cream. He buys from local farmers and the Farmers Markets to constantly bring in fresh produce and fruit. Most of it is used for their smoothies and drinks like “cucumber water,” a tasty, frothy sweet soda. It’s worth visiting Yelp.com (where they’ve earned outstanding reviews) to check out the photos of their beautiful food platters catered for private parties and weddings.

“Everything we make is healthy, and we never cook with lard,” Jose pointed out. “We use turkey hotdogs in the torta Cubana [$11.45], marinate chicken and beef with fruit juice, and we don’t add extra oil while cooking it.”

Some locals have said they’re put off by the psychedelic yellow, take-out place. They reminded me of the cynics who used to say they never dined at Chef Rick’s in Orcutt because it was in a strip mall. Seriously? It’s puzzling to hear that anyone would miss out on some of the best tasting, freshest local foods served on the Central Coast simply because they don’t like the location. FrutiLand, on Grand Avenue near Halcyon, is no upscale restaurant but I’ll be a regular patron who craves their delicious cuisine and friendly service.

The soulful chef candidly added: “It’s my dream that people will come here often because me and my wife take good care of them. I try to do my best to make people feel they’re at home here.”