I wasn’t there on Aug. 16, 1974, when the Ramones first played CBGBs, but I know what it probably felt like, because I am here, in the Z Club, on Friday, June 1, to see Han Solo’s Baby, American Dirt, and Magazine Dirty.

I’m not saying one of these bands is the next Ramones, but I’m definitely feeling all the energy, excitement, and anticipation of a slice of largely unknown punk and rock acts ready to show they’ve got the chutzpah! 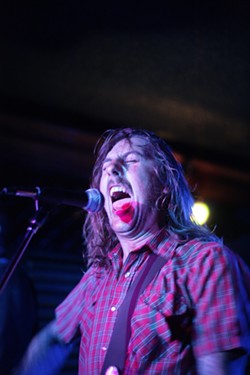 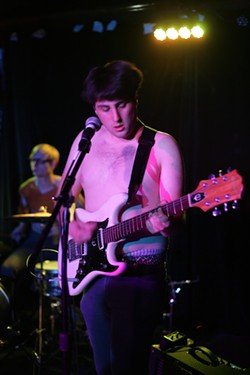 In between songs, bassist Big Bri tells Wrong Chord Dan, “Dan, get your shit together.”

“I was on that shit,” Dan claims. “We’re gonna have all sorts of sex. We’re gonna do all the positions.”

I offer Kristen, Z Club’s 25-year-old bartender, some of my earplugs, but she declines.

“I have to be able to hear the orders,” she says, not realizing that if she doesn’t start wearing earplugs at shows like this, she won’t be able to hear much of anything in a few years. 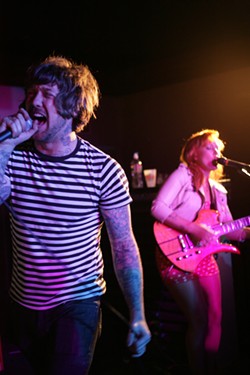 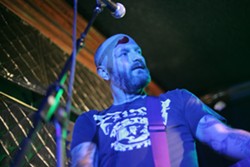 Then American Dirt takes the stage. I’ve been meaning to see these guys for a while, since their lead guitarist Jon Bartel is a colleague in Cal Poly’s English department. Jon’s got on the classic country rocker costume: trucker hat, sleeveless denim jacket, jeans, and a belt that ain’t workin’!

They rip into their set—half rock, half country. Lead singer Dave Wilson is a rock star with his long hair and tattoo sleeves, and he sings with the ferocity of a banshee.

The whole scene is so damn rock’n’roll. Between songs, Wilson gives a nod to Han Solo’s Baby by saying, “After tonight, I have to say I fuckin’ love dick songs.”

The whole night throbs like a raw nerve. Not everyone has stood in a hot garage, light streaming through cracks in mattresses pushed up against walls and windows, egg crates nailed willy-nilly, a bass drum stuffed with a pillow to dull the thump, the anticipation, the perspiration, then the moment, the downbeat, that garage energy of a new band finding their voice. It sounds like that in here.

American Dirt finishes its set and Wilson calls out to the audience, “Glad to see someone around here gives a shit,” the eternal complaint of a band that deserves more attention.

Next up is Magazine Dirty, and front man Curtis Campbell, a professional hair stylist, is sporting a wicked hairdo.

“I’m thinking Mick Jagger circa 1963,” he says, before getting on stage and strutting in a way that would make Mick proud. You can cut the sexual tension with a knife.

“Someone’s going to get pregnant tonight,” I predict, to no one in particular.

This is raw, real, rock n’roll! Where were you?