Disappearance dustup: A new publication has made big claims in the 19-year-old cold case of Kristin Smart 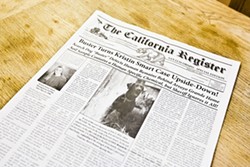 By all appearances, the publication—the fourth of its kind—looked like a regularly published periodical newspaper new to the scene: It’s labeled Volume 3, Issue 1, dated January 15, 2015, and has a website, all placed around the paper’s logo, a California grizzly. The first article’s headline reads like the paper is breaking earth-shattering news about a dramatic turn of events in the almost-two-decades-old mystery of the disappearance of Kristin Smart.

The paper, which was reportedly also distributed in Pismo Beach, drew mixed reactions and sparked curiosity about its origin and the publisher’s motive. In September, a previous article had sparked chatter on the Internet. This attention generated questions about whether or not there were new developments in the cold case of Kristin Smart, who, as a 19-year-old Cal Poly student in 1996, mysteriously disappeared while walking back to her dorm after a party.

The California Register Publisher David Smallwood said the paper was born as an effort to bring attention to the Smart case.

“I do this in the interest of the Smart family,” he told New Times. “The point is that now the people are discussing the loss of these people’s daughter. And that is a quantum leap forward.”

While Smallwood’s goal may be to keep the case in the community’s mind, the way he’s gone about it has drawn ire from both Kristin Smart’s parents and the San Luis Obispo County Sheriff’s Office, the case’s lead investigative agency.

Specifically, the previous California Register issue, published in September 2014, ran a headline that read “Kristin Smart’s Body Finally Found?” Though it ended with a question mark, the damage was done, prompting the Smart family to release a statement through the Sheriff’s Office on Jan. 16, the day after The California Register’s most recent distribution.

“We wish to clarify that our daughter’s remains have NOT been located,” the statement reads. “After learning of the existence of this article, we requested that it not be published. The article consists of assumptions and opinions of people that are not authorized to be involved in Kristin’s case. Although they mean well, the information and opinions have no bearing on the case itself. Any names that are mentioned in that article are used without authorization or permission of the persons, with the exception of the person providing the information.”

The Smart family’s statement goes on to call the publication “damaging to the on-going investigation.” The family also states they continue to be in contact with Sheriff Ian Parkinson, asking anybody with information on the case to share it with his department.

Smallwood, however, plans to stay the course, brushing off the reaction from the Smart family.

“In our business we use that as a literary hook to try to get people to read the article,” Smallwood said. “In other words, I was asking the reader has she been found.”

The publication has focused on the theory that Kristin Smart’s body was buried in the backyard of an Arroyo Grande home that was at the time owned and rented out by the family of Paul Flores, also a Cal Poly student in 1996 and a person of interest in the case. The theory has been the subject of several split hairs between self-nominated amateur experts and the Sheriff’s Office. Because the case is still undergoing investigation, law enforcement can’t divulge many details, so specifics can’t be fully vetted or discussed.

The Jan. 16 statement released by the Sheriff’s Office made clear that not only has the case been under investigation since it first opened 19 years ago, but newly elected District Attorney Dan Dow has also assigned a deputy district attorney to it. After refuting claims made by The California Register, the statement reads: “The Sheriff’s Office will not try this case in the media. Our commitment is to assemble enough evidence to prosecute the person(s) responsible in front of a jury. We cannot obtain a conviction based on what we believe; it must be based on what we can prove.”

Tony Cipolla, the department’s spokesperson, said advancing the case is the bottom line: “We want people to know that this is what the Sheriff’s department is doing with this case: It’s an active investigation, and we are doing everything we can … to find out where Kristin’s remains are and who did this.”