Disaster responders: Red Cross volunteers give their time to help others caught up in the worst crisis of their lives

Find out what you can do to help respond to
emergencies as a Red Cross volunteer by visiting
redcross.org/local/california/central-california.

About seven days after the Thomas Fire began, the Ventura Police Department gave Red Cross volunteers permission to go up to some of the neighborhoods that were reduced to rubble.

"We went out to the burn areas when people were first returning to the area ... . And we were able to walk around and see who was up there and give them help if they wanted and just give them encouragement," volunteer and Red Cross Disaster Team Captain Keith McLellan said. "It's overwhelming." 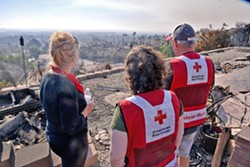 Walking through an ash-covered neighborhood, McLellan and his buddy Burt noticed an older couple amid the ruins. Their grandson was in the backseat of the car parked nearby.

Burt asked the couple if he could give the boy a Mickey Mouse doll from the Red Cross. Yes, they said, but only if he'll take it.

Burt walked over the car, knocked on the window, and opened the door, offering the doll to the boy.

"The young boy grabbed it and just said, 'Mickey,' and hugged it to his chest so tight," McLellan said.

The couple told the volunteers that it was the first word their grandson had spoken in four days.

"He was sitting outside of his home, which was nothing but ashes," McLellan said. "So that's the sort of stuff we're dealing with."

It's important to help people in situations like that feel like they've gained back some control over a part of their life, he said. Basically, the goal is to aid someone in moving from despair to hope, so they can get on to the healing process. He compares losing a home in a major crisis such as a fire to the loss of a loved one. It's not as bad, he said, but in many ways it can be. 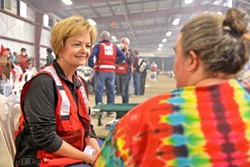 The Thomas Fire, now the largest fire in California's history, had burned almost 282,000 acres of land in Santa Barbara and Ventura counties as of Jan. 7, when it was 92 percent contained. McLellan said 720 homes were totally destroyed in the flames—that's more than 700 displaced households processing the grief and shock of returning to piles of ash.

McLellan was one of hundreds of trained Red Cross volunteers who showed up to help victims of the Thomas Fire find shelter, government services, counseling, meals, clothes, medications, and financial assistance, according to Jessica Piffero, the director of communications for the Central California region. She said that about 2,000 spontaneous volunteers (as in, not trained or in the Red Cross system) reached out to offer help, and about half of that number ended up working a shift.

Those volunteers served 46,000 meals and snacks, handed out more than 23,000 relief supplies for disaster cleanup, gave away more than 650 comfort kits with hygiene items, and made nearly 4,500 health services contacts. The Red Cross opened a shelter on the first day of the Thomas fire, Dec. 4; operated up to five shelters simultaneously at the fire's height; and closed its last shelter on Dec. 22. Piffero said they had nearly 6,000 overnight shelter stays in those weeks (a shelter stay equals one person, one night) across shelters at UC Santa Barbara, the Ventura County Fairgrounds, the Santa Paula Community Center, Oxnard College, and Nordhoff High School in Ojai.

Before disaster strikes, the Red Cross is constantly training its pool of volunteers; giving presentations to government agencies on things like fire and earthquake disaster preparedness; and collaborating with other nonprofits, faith-based organizations, and government organizations through something called VOAD (Volunteer Organizations Active in Disaster).

"Our local Red Cross is 95 percent led by volunteers, and we rely on them heavily to do that work. They respond in the middle of the night. They respond on holidays. You know, disasters don't discriminate," Piffero said. "There's a lot of work that goes in so that we're ready to open a shelter and respond at a moment's notice."

Volunteers often specialize in the thing they feel most comfortable with, whether it's sorting donations or interacting with government officials. 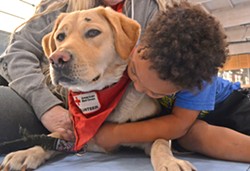 There are people such as McLellan, a Lompoc resident who has responded to hurricanes on the East Coast and has worked with Red Cross for the past four or five years. He is the external relations lead for the Red Cross' Santa Barbara County office and acts as a liaison to government agencies and community organizations. During disasters such as the Thomas Fire, he's also the spiritual care lead, which is similar to a chaplain (he's also the volunteer chaplain for the Lompoc Fire Department) but also helps provide mental health and health services to people who are dealing with trauma.

"Basically, it's crisis support," McLellan said. "Most people have some kind of spiritual orientation, so we help them tap into that."

Similar to McLellan, Hopper does more than simply volunteer her time and compassion to national-level disaster response. Also from Lompoc, she got her volunteering start four years ago with the Community Emergency Response Team (CERT), which is sponsored by the Lompoc Fire Department. Normally, CERT trains for things like urban search and rescue and triage at events like the Lompoc Flower and Spring Arts festivals, where they set up a booth. Through McLellan and Hopper, the Lompoc Fire Department coordinated with the Red Cross to respond to the Thomas Fire, sending about seven CERT volunteers to help out at the shelters and hand out things like masks in grocery store parking lots.

It was the first time CERT and the Red Cross had worked together, which was exciting for Hopper, who estimated that she worked between 45 and 50 hours at the Ventura Fairgrounds and UCSB shelters. 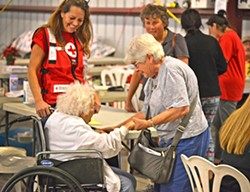 "This was the first time that we had a chance to work together with each other, so that was awesome. The fact that we had a such a disaster that we were needed was not great," Hopper said.

She's worked with the Red Cross for about a year and a half, volunteering at the Chimney Fire in San Luis Obispo County in 2016, and the Whittier Fire in Santa Ynez and the Alamo Fire east of Santa Maria in 2017.

Most of the time, people who get evacuated from their homes come into the shelter with what's on their back. Hopper said she tries to help them get what they need, whether it's a bath towel, a blanket, or medication that was left behind. It's similar to what the Red Cross' Disaster Action Team (DAT) does at the more personal tragedies, which DAT responds to at the request of the fire department, according to McLellan.

"We offer assistance to the families and if we can, we provide them with financial assistance immediately so they can get some clothes," he said. "It's a short-term, middle-of-the-night often, where we go out and help people who are just sitting outside, because they can't go back into their homes."

Although DAT can't do a lot, the Red Cross can do just enough to help people get going again: put victims in a short-term hotel stay, help them find medical care and crisis counseling, provide them with cash if the wallet and checkbooks all go up in flames, and/or connect them with a caseworker for followup.

DAT also helps out with prevention measures, such as educating communities about smoke detectors. Volunteers are actually going to canvas homes and apartment buildings in Guadalupe at the end of January to check, fix, and install smoke detectors.

"You get out of it as much as you put into it," he said. "Never underestimate the power of a simple gesture of kindness and encouragement to a fellow human being whose life has been turned upside down by disaster." ∆